Ah, dear Crystal. Your delightfully daffy presence almost makes up for the fact that we’ve been without my three favorite characters—Alison, Felix and Helena—for two whole episodes now. And you provide a very welcome comic distraction from the very grim doings on the other side of the world at Revival.

Crystal is the only clone character on the show to remain naïve to her genetic status. Willingly so, apparently, and against all odds, since her sisters have basically been telling her for two seasons now. Oh and also they look exactly like her. But she doesn’t, y’know, see the resemblance? Somehow she’s persisted in her idiotic and self-centered belief that this is all about makeup and everything that has happened is the result of a conspiracy by Big Cosmetics.

Of course the delightful part is that this deluded belief somehow keeps leading her to stumble onto important pieces of the truth. Nobody has ever been so right by being so wrong.

This time around, Crystal has created an anti-Big Cosmetics YouTube channel to bring her message to the masses. She is remarkably successful at it! She and her friend Bree go on camera to demonstrate beauty methods that don’t require mass-produced products. But the latest one goes awry when Bree’s hair starts falling out, and Crystal is convinced she’s been poisoned by their enemies in the cosmetics industry.

Wise enough to her weirdly prescient ways not just to write her off as nuts, Art calls up clone club and asks if maybe she’s onto something? Which she is! She thinks the conspiracy of cosmetics companies have targeted a maker of ethical, sustainable beauty products named Leonard Sipp, whose company, Bluezone cosmetics, is one of the thousands of Dyad acquisitions Felix and Adele have uncovered in their sojurn in Geneva. So there is a Neolution connection after all, just not the one Crystal thinks. Yes folks, she has done it again.

So while Scott tries to figure out what happened to Bree’s hair, Sarah and Art set up a little sting on Lenny to try to figure out why Dyad would want to buy a cosmetics company. Sarah will dress up like Crystal (her impression is frigging hilarious and a welcome reminder of just how good Tatiana Maslany is) and get the info out of him. But Crystal gets bored as Crystals are wont to do and also wants Bree to hook up with Scott, so she leaves them and decides to do the sting herself, using some spy gear she bought.

Hilarious chaos ensues. Crystal has trouble keeping her mind on the mission because she also wants to screw Len (who, fun fact, is played by Maslany’s real-life boyfriend Tom Cullen, so he basically gets to make out all episode with the dumbest possible version of his girlfriend). Len, meanwhile, is in the middle of a three-day bender after selling his company and not much in the mood for talking.

But eventually the facts come out: Bree wasn’t poisoned, she dosed herself with a face cream that she stole from him. Turns out it was an experimental topical delivery system for gene therapy (which in this case delivered a dose of hair-falling out). This is what Dyad bought the company for: a way to manipulate people’s genes through their skin.

So Crystal kicks Len Sipp in the groin, rubs the cream all over his luxurious beard, and runs off.

Sarah and S are also trying to stall Kira’s next visit to Dyad, as Delphine has told them that the great egg harvest is coming soon. They fool Mr. Frontenac with some ipecac syrup and a well-timed regurgitation from Kira. But P.T. Westmoreland puts pressure on Rachel, and she shows up to take Kira for a “sleep study.” And there is little her mother or grandmother can do.

Meanwhile at Revival, things are quickly reaching their breaking point on several fronts at once. Westmoreland reveals to Susan that Coady is back and that they will all be working together, prompting Susan to realize that maybe the ends here don’t justify the means after all. She sends Ira, who is glitching all over the place, to meet his maker and pump her for info, and he notes that she is taking blood from healthy children. It seems Westmoreland is using parabiosis, pumping his old blood out and young blood in, a practice whose scientific basis is shaky at best. For Susan, this is the final straw, as well as a possible means to get rid of the old man.

Cosima is still locked in Yannis’s cell in the basement, and she can’t seem to convince Mud to let her out. Poor Mud blames herself for Yannis’s death (and that of the guard he killed) and has taken to wearing a cowbell as penance and generally just moping around. The rest of the Revivalists aren’t sad; they’re mad and getting madder, especially when little Aisha dies suddenly.

Ira lets Cos out and they convince Mud to help them. She’s still hesitant—Westmoreland saved her life when she was a junkie who OD’ed back in Seattle, and she feels she owes him. But she sees that he is increasingly unhinged and under the influence of genocidal Coady. So she distracts Westmoreland while Susan injects a lethal dose of morphine into his parabiosis drip. But he’s kind to Mud while the subterfuge is going on, and her resolve slips.

Cosima gets Charlotte and her medicine, but now the villagers are more than just restless. And they associate Cos with the science and the big house; she’s certainly not one of them. To prove she’s not on Westmoreland’s side any more than they are, Cos shows them a photograph that Susan gave her of her and Westmoreland as young students at Cambridge. It’s all been a lie: Westmoreland isn’t 170, and he’s not the father of Neolution. That guy died a century ago, and the rest has been theater. They get out their pitchforks and set fire to everything. Cos and Charlotte are able to make their way to a motorboat.

Westmoreland doesn’t realize just how screwed he is, but he cheats death this time. Mud has apparently confessed her part in their plot, and he takes out the IV and sticks it in Susan instead. Ira finds her dead and then glitches himself to death as well. Cos and Charlotte, having waited for them as long as they could, motor away into freedom on a still but pitch-dark ocean.

The one connection between the stories: Cosima finally meets Coady, who comes to visit her in her cell. And Coady tries to convince Cos to join their cause, use her big science brain to help them in their evolutionary pursuits. She’s particularly interested in some innovative new kinds of delivery systems for gene therapy, like Len Sipp’s cream, which, along with 1,300 surrogates being implanted with Kira’s eggs, seems to be where the whole plot is headed. And someone who can manipulate a person’s genes just by rubbing a substance on their skin­—or sneaking it into their hand cream—is a scary someone indeed. 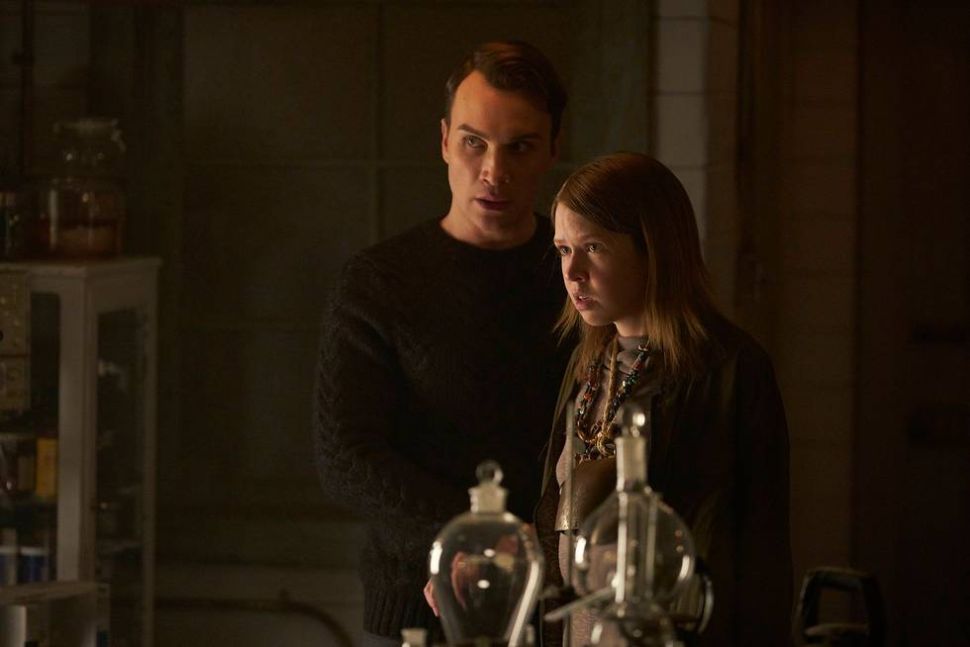