In its clearly well-considered final season, Orphan Black has wisely decided to give us several episodes that each focus in on one of the clone sisters. While still carrying the story forward, these vignettes give us the opportunity to visit with each of our beloved sestras in turn, before we finally say goodbye.

So we got an Alison-centric episode that saw her hit new depths and find some measure of redemption. A Cosima story that revealed the truth of her relationship with Delphine, and with science. And now we get a deep dive into the story of Rachel Duncan, the lonely pro-clone. (After which there’s the promise of a Helena story episode to come, and I Just. Cannot. Wait.)

Rachel has always been something of a riddle. Raised by a corporation, brought up believing she was somehow both special and expendable, taught to condescend to and deceive her own kind, she always seems just on the edge of losing her tightly-held control. Now, she finally does.

What pushes her over the edge is the constant flip-flopping between esteem and disrespect that she’s alternately received—one moment the director of Dyad and the head of Neolution, the next, one of its interchangeable clone subjects. This has always been a feature of Rachel’s life, as we learn in a series of pointed flashbacks. But now, as P.T. Westmoreland becomes more and more erratic, it accelerates past all tolerance.

We start with a flashback to Rachel’s childhood where she meets the Neolution board for the first time. They’re impressed that she’s self-aware—she even knows her own clone serial number—but still so well-adjusted. They don’t see her picking frantically at her cuticles behind her back.

In the present day, Rachel wings off to the island just after concluding the arrangements for harvesting Kira’s eggs. (Kira is being kept her for a second day, breaking the promise to Sarah.) On the island, P.T. has a surprise for Rachel. Dr. Coady is going to examine her.

Westmoreland and Coady seem to think Rachel should be happy about this. They’re focusing their efforts on making sure she never gets the illness that has ravaged her sisters. But Rachel is not amused. In a flashback we see Westmoreland telling her he thinks of her as a daughter, but now he’s treating her like one of his patients. In another flashback, we see him signing over her rights to her own body to her, declaring that she is no longer Neolution property, no longer identified by a serial number. That serial number is now clearly printed on Coady’s file.

Though the real abuse here is emotional—Rachel begins to realize she is being manipulated through the promise of autonomy, rather than any real autonomy—the procedure, a pelvic exam, is presented as its own physical violation. We get yet another flashback, to Dr. Leekie and another Dyad doctor giving a much-younger Rachel a similar exam, and treating her like she’s not even there. The cuticle-tearing continues.

But the final straw for Rachel comes in Westmoreland’s study. He decides to tests her fidelity by demanding that Kira be brought to the island. This is not the plan—Dyad has much better resources—and it places Rachel in an even tougher spot with Sarah. But he overrules her meek protest with accusations of disloyalty, and she concedes.

Her hackles now sky-high, Rachel waits until Westmoreland is gone and rifles through his drawer for the tablet he always seems to be putting away whenever she enters. What she finds removes any last doubt that Westmoreland is a manipulative, scheming bastard. The tablet is a camera feed from her artificial eye. The eye that P.T. created for her—he’s been using it to spy on her this whole time.

Meanwhile back in Canada, Sarah and Mrs. S are becoming increasingly worried that Kira has been gone so long without any contact. Worse, Cosima is back (safe and sound, thank god) with the news that they intend to harvest her eggs and start human cloning up again. Mrs S wants to storm the castle immediately, but Sarah is the voice of reason, for once. Luckily Cos also has the crucial info that Westmoreland isn’t actually 170; his whole persona is a fraud. Maybe they can use that as leverage to help Kira? So Hell Wizard, Scott, and Cos try to find out who Westmoreland really is.

Rachel goes back to Dyad and starts to get brutally, impressively drunk on the driest of martinis (recipe: drink gin directly from the bottle while holding a martini glass in your other hand) to salve her existential pain. She watches movies of herself as a child, and flashes back to that time she murdered a sick clone to study her corpse. Leekie realizes this is what happens when a child has no parents but a corporation. “What are you?” he asks in horror—the same question an increasingly drunk Rachel is now asking herself.

Then it’s time to sedate Kira, who has already revealed to her mother (using a not-particularly-clever secret code) that she’s going to be taken off to the island. Sarah, desperate, calls Rachel to say P.T. is a fraud and they’ve uncovered his real identity, the son of a Texas oil tycoon, born in the ’30s. But Rachel dismisses her, too. She already knew that he wasn’t 170, just not what his real name was, she claims. Oh yeah, and don’t bother telling the Neolution board­—they’ll never believe anything Sarah says.

Rachel is now drunk enough to put together a plan of action. Keeping her eyes fixed on her pocket watch, she makes sure Westmoreland doesn’t see what she’s doing with her other hand: texting. She dispatches Frontenac to go silence Sarah and Mrs. S. Then, retreating to her meditation space (how convenient that she’s established this for Westmoreland as a regular practice of hers!) she closes her eyes and puts on her old eyepatch, cutting off his surveillance.

Turns out the person she was texting was Art. He gets Sarah and S out of the house before the men with guns show up, and brings them to Dyad, where Rachel is waiting with the sedated Kira on a gurney. Rachel’s crisis of identity and trust evidently boiled over precisely when it needed to, and just in time to save Kira.

Armed with the information on Westmoreland’s true identity, Rachel emails to the Neo board. They may not trust Sarah, but they’ll have to trust her. And she aims to wipe Westmoreland out, starting with his tech in her own head. She breaks her martini glass and uses it to gouge the artificial eye right out of its socket, with a shriek of self-hating vengeance and a river of blood running down her face.

Also, Alison is back from her voyage of self-discovery. She’s got streaks of purple in her hair, a bad tattoo, and a superficial understanding of Jung. Donnie is supportive but skeptical, especially when she trashes her craft room and transforms it into a music room. Another amazing performance here from Maslany, who injects her Alison accent with just a teeny bit of Cosima’s, because an enlightenment-seeking Ali would definitely try to be more like her boho-Californian sister.

And finally, the multiply betrayed and betraying Mark and Gracie are back. Mark is summoned by Coady, who offers him the potential for a cure if he gives them something in return. And that something is Helena—somehow found by Gracie deep in retreat. Neolution may have lost Kira, but they’re not the only insta-healing clone kids out there. Helena has two, all ready to be born. 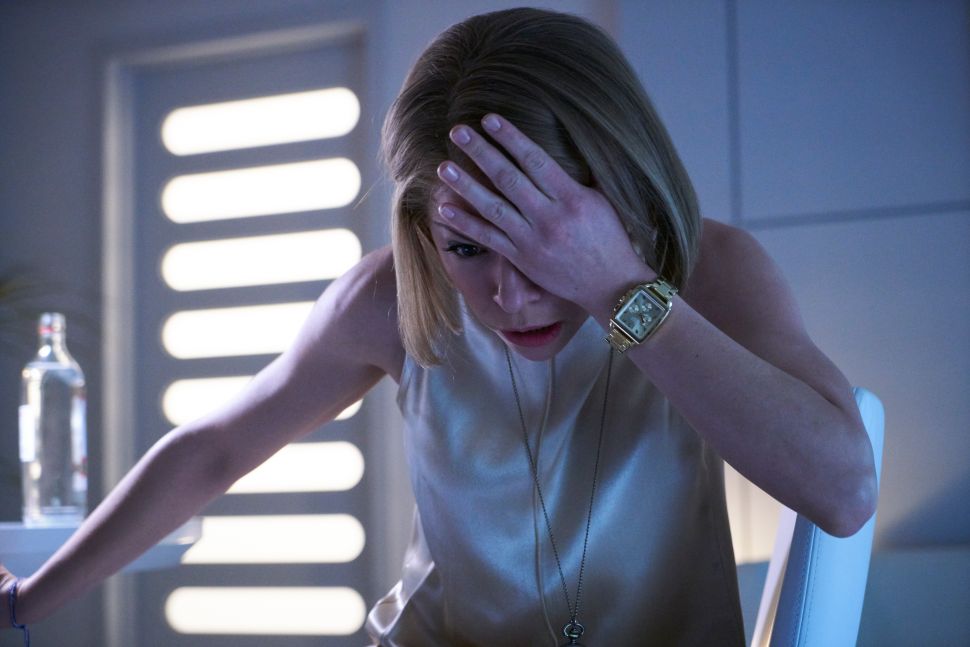