Mrs. S does whatever she must to protect her children. It’s not just her mission or her intention. It’s who she is, the basis of her every action, every movement. Whatever terrible thing she has to do to protect her family, whoever she has to manipulate, betray, hurt, kill, she’ll do it—even if that means sacrificing herself.

Welcome to the endgame, friends.

In episode 8 of this final season, the terrible act with which Siobhan has been tasked is dealing with the unhinged psycho Ferdinand. This is the dark secret she’s been keeping the whole time; this is the person within Neolution who led them to Virginia Coady in the mental hospital. And it’s apparently the whole reason Delphine lied to Cosima so continually that they nearly broke up like 100 times.

None of the sisters would ever condone working with him—Ferdinand is the evil bastard who brutally murdered MK. But he’s the only path Mrs. S has to Rachel, and Rachel is the key to taking down Neolution once and for all. She’s the only one who knows where the bodies are buried. So both S and Delphine lie to the ones they love the most, to do what must be done to finish things.

Sarah’s paranoid at the best of times, though, and knows something is up. So S finds a distraction: Felix is back, with Adele in tow, and tonight is his super-important art opening (which we’re all just finding out about just now even though they’ve apparently been planning it for months). They have Kira back, Cosima and Charlotte are safe, and it’s time for everyone to stop thinking about Neolution for a while and turn their attention to Felix and his art show. Or, in his words, to “take the day off from crazy.”

This is Orphan Black, though, and we don’t get a vacation from crazy here, even at art openings. Felix is insistent that the only member of Clone Club who can attend is Sarah, as the presence of three identical sisters will create more trouble than it is worth. He needs everything to go smoothly, as a very influential dealer will be coming. And god knows things are never smooth with a bunch of sestras around.

But when he tries to shoo Alison, who has come to help set up, she wisely points out that Felix isn’t going to be able to avoid being surrounded by clone sisters—literally every piece of art in the room is about them. And that’s when Felix gets an excellent idea.

Felix has painted each of the sisters on huge canvases in the mode of Greek goddesses. And instead of kicking all but one out, he introduces each one in turn, acting just like themselves: Alison as Hestia, goddess of home and hearth, who gives everyone suburban soccer mom on full blast. Then Cosima as Metis, goddess of wisdom and deep thought, who immediately pulls attendees into a dance. And finally, the late-showing Sarah as Athena—here tellingly portrayed simply as goddess of war—who shuffles onstage and eyes them all warily.

Since images of the other sisters adorn the rest of the walls, fans will love speculating on their goddess personas. Helena, with her mirror-image heart, could be Persephone, goddess of the underworld but also of fertility. Rachel might be Eris, goddess of discord, or Enyo, the wife of war who was also one of the one-eyed Graeae. And for Beth I’d have to go with Hera, the mother of them all. Art and Sarah spend a long moment staring at her painting and mourning everything that has come before.

The exhibition is a rousing success (also a great opportunity to witnessTatiana Maslany’s astonishing acting skills in every role). But then, Felix takes it up another notch. He explains why these images of his sister(s) are so important to him, and in so doing he gives a good explanation of what makes Orphan Black such a unique and compelling show.

Mrs. S rescued and raised these two little English orphans, he tells everyone. If she hadn’t, they’d be completely different people. Watching his mother raise his sister, and his sister raise her daughter, and finding his own biological sister, he says, “taught me that we are all mysterious works of chance, of choice, of nature vs. nurture. So to my galaxy of women: thank you for the nurture.”

The unspoken connection to the rest of that “galaxy of women,” Sarah’s other family, her clone sisters, forms the nature part of that equation, which Felix doesn’t give short shrift. We’re made of both chance and choice, in a mysterious and unquantifiable mixture. Anyone who tries to pin it down to one or the other, like Neolution (or the Proletheans), is in for a brutal surprise.

Because while the party is going on, Mrs. S is setting her plan in motion. She has Ferdinand rescue Rachel from her eye-gouging, and now she and Delphine meet up with them to share the results of all of their research. They’ve got files and files of evidence that Neolution was planning not only to sell designer evolution to the wealthy, but also to sterilize the rest of the world’s population, effectively insuring that their artificial evolution was the future of the human race.

In order to do so Neolution had to bribe pretty much every country on Earth. But what Delphine and S lack is proof. Only Rachel, the CEO of Neolution and now its enemy, has the smoking gun. Mrs. S appeals to Rachel’s nature over her horrible nurture. She saved Kira, after all; there must be some good in her. So Mrs. S gives her all of the info they’ve collected and asks her to do the right thing.

Ferdinand, who recently lost his whole fortune to MK’s machinations, wants to use the info to leverage Neolution out of billions. Rachel says what she really wants is to expose Neolution for the fraud that it is, and then to disappear forever, away from everything. But Ferdinand is single-minded, focused on himself, so Rachel makes a simple switch, sending him into his own blackmail meeting empty-handed.

Rachel then gives the real info to our heroes, and Delphine and Cos send it to the right regulatory agencies and the right journalists, and that’s it. Neolution is done for. Good thing, too, since Sarah, still no dummy, has seen Mrs. S acting super weird all day, and decides to pump the weakest link, drunky drunk Adele, for information. A few scotches later, she spills the fact that Delphine had a call with Ferdinand, and now Sarah is on the warpath. How can you work with the psycho who killed my sister?

Mrs. S tells her that the ends really do justify the means in this case, and guess what—it’s already over. Neolution is as good as dead, and Ferdinand is basically walking into a trap. Sarah, mollified, joins the party.

But there are two problems with that comfortable explanation. First off, Neolution may be done for, but the Neolutionists are still around, and they aren’t taking it lying down. Coady has sent little Gracie Johanssen to find Helena. And find her she has. Helena’s sisterly kindness makes Grace reevaluate her choices, and she lies to Mark on the phone, telling him she’s still searching.

But Neolution traces the call anyway, and Detective Engers shows up to capture Helena and shoot poor Gracie in the head. (Goodnight, Gracie.) The major Neolution project may be dead, but now they have Helena and her miracle babies, and god knows what evil purposes mad scientist Coady has in mind for them.

And the second problem with Mrs. S’s rosy picture: Ferdinand, left holding the proverbial bag, shoots his way out of the meeting and comes after them—first Rachel, whom he chokes out but decides to let live, and then Siobhan, whom he most certainly does not.

The two of them have a tense standoff at the house that signals and end for both of them. Ferdinand is shot in the throat, finally shutting him up for once, and Mrs. S right through the heart. A fitting end, as she dies in her house, staring sadly at a picture of her adopted kids. “Oh, chickens,” she sobs. I don’t think I’ll ever see that word the same way again. 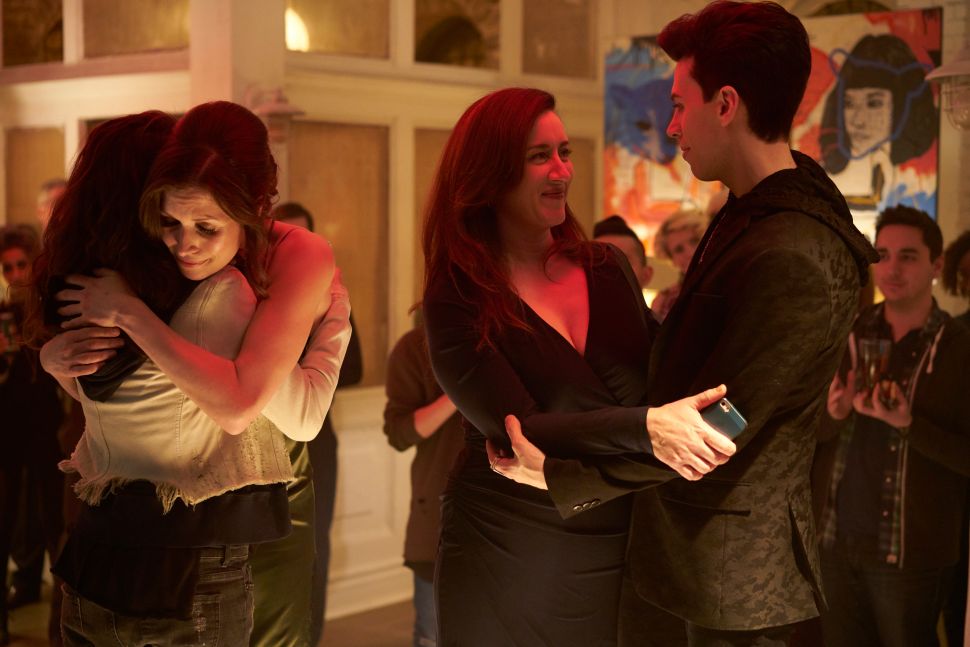