Some news consumers may have raised a skeptical eyebrow when they saw the news that a giant solar panel array has opened in China in the shape of a very cartoony panda. That’s good. This is the kind of news that merits some skepticism, but after calling the United Nations press office in New York, we can confirm that the giant solar panda is real.

Maybe the world is going to be okay?

It’s been a banner week for alternative energy. Earlier, Volvo announced that it would quit making exclusively fossil fuel burning cars by 2019. Today, France announced it would ban fossil fuel burning vehicles by 2040. To top it off, China has a giant solar field up and running that looks from the sky like the finest of mammals.

The United Nations Development Program (UNDP) first announced the panda fields in September, but the field only connected to the grid at the end of June, according to the company that built it, Panda Green. The UNDP has been promoting panda shaped solar fields as a way to generate interest among young people in alternative energy.

It’s a 50 megawatt plant. Translating that into the number of homes it can serve is complicated. Boise Weekly looked into the question a couple years ago and found that a conservative estimate for homes in Idaho would probably be something like 400 to 600 typical residences per megawatt.

However, this solar field is in Datong, China, which has historically been an industrial region, with coal mining as its base industry. With incomes there at about $2,600 per year, it stands to reason that the typical home in the region might sip power a bit more gently than those in America. So this solar field’s power will probably reach significantly more families than it would here.

Ultimately, the field will double in size, to a 100MW capacity. Panda Green estimates that the plant at full capacity will eliminate the need for roughly a billion tons of coal over 25 years.

The black parts are made from monocrystalline silicone, which is the more efficient but also more expensive way of of making solar panels. The white parts are made from thin-film solar cells, which costs less and has been improving in efficiency in recent years.

The United Nations Development Program is working on a larger program to develop leadership among young people in sustainable development. The panda solar field will be the site of a summer camp for young people from around the country.

Here’s a video from UNDP aimed at building interest in sustainability among young people in the world’s second largest economy:

The solar panda fits into China’s larger “Belt and Road” initiative, a $150 billion infrastructure program. It could mean many more solar pandas to come. 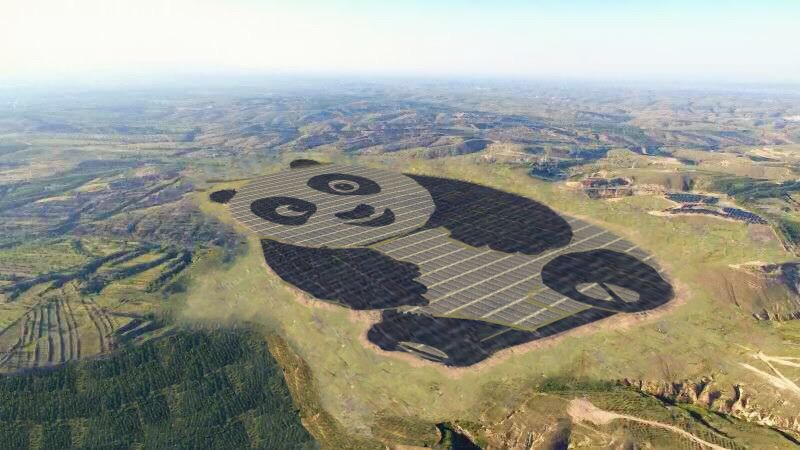