Though there are a couple options for getting to Panorama Music Festival—New York City’s answer to Coachella created by the promoters behind, well, Coachella—the best one by far is the ferry service from East 35th Street. Cruising down the East River this past Friday on my way to day one of the much-hyped event held on Randall’s Island, I recalled a piece of trivia: In 1835 the original owners of Randall’s sold the island to New York City for the tidy sum of $60,000. Little did I know that by the end of the night I too would be spending $60,000 on Randall’s Island, after buying two cocktails and a taco.

The weather forecast leading up to Friday was ominous, but overcast skies and the kind of thick humidity that you’d have trouble cutting with a butter knife set a sultry mood for the day. I attended with my friend Drew Jessup. Drew is a social media influencer, which basically means that he’s much more handsome than me. Like any dutiful music festival attendees, we concocted a solid plan to hit all of the artists we want to see. The genius facet of Panorama’s lineup (and most modern music festivals in general) is that it’s designed to be like an iTunes on shuffle—an alt rock sensation, followed by a pop princess, capped off by a rap god.

The first act to take the main stage was Honne. Their lead singer, an English gent with the seemingly made-up name of Andy Clutterbuck, has a voice that’s as smooth and sweet as the Frozen Watermelon Margarita I nursed through their set. Along with standout backup singer Naomi Scarlett, Clutterbuck’s vocals revealed their best during a sexy rendition the band’s hit “Warm on a Cold Night,” a tune that’s as seductive as it is soulful. If there was ever a time to hit on the person next to you, it was during Honne. (But given that there was a 50 percent chance the person next to you was a high schooler on summer break, not advisable.)

The cross-section of the crowd was prime for people-watching—a virtual iTunes shuffle of audiences to match the music. Sure there were high schoolers, but there was also your mix of wide-eyed New York tourists, older folks reliving their youth, rich frat bros who shelled out for VIP, college dweebs, jaded Manhattan music industry professionals, skinny guys in muscle tanks, voracious alcoholics and amateur drinkers (both drunk by 6pm), grown men in bandanas, and, last but not certainly least, Solange’s entourage.

By midday, Future Islands had taken the stage. Their lead singer, Samuel T. Herring, is from Baltimore, but by all appearances looks like he’s from another galaxy. Drenched in sweat, the only thing Herring could have done to deliver a more heartfelt performance was to literally cut his warm and bloody aorta out of his chest and throw it full force at the crowd below. Performing cuts from their entire catalogue, including from their most recent album The Far Field, Herring and his cohorts navigated all of their songs as if it was their first time ever performing them, despite the fact tracks like standout “Seasons (Waiting On You)” came out in 2014. Similarly, the Danish pop singer MØ also put on a spirited set. Correctly pronounced “Moo” (like the cow) and incorrectly pronounced “M.O.,” “Moe,” or “M-line-through-O,” she excitedly ran through her cavalcade of hits from “Cold ” to “Final Song,” ending her set crowd-surfing while miraculously not missing a single note.

As night fell on Randall’s, the crowds grew. Solange—who is perhaps best-known to some for being Beyonce’s sister, and second-best known for going nuts on Jay Z in that elevator—served as a more serious, more progressive Beyonce. Dressed in 70s-era garb, she crooned slow and thoughtful R&B tunes while strutting the simplest of dance moves as if it was a Sunday morning physical rehabilitation session at New York-Presbyterian. To counterpoint, Frank Ocean, the night’s headliner, then took the stage. Much like Future Islands’ Herring, Ocean delivered an emotional set, but unlike Herring he delivered it in a understated, though just as effective way. “Hand me a towel I’m dirty dancing by myself,” he intoned in the opening line of “Solo,” a highlight from last year’s Blonde. Through plumes of smoke (50 percent of which came from smoke machines, the other half from the crowd below) Ocean commanded the stage.

On the ferry back I felt as if I’d been on a mystical trip on a faraway land, with questions about all I’d seen still lingering: Is Andy Clutterbuck his real name? Am I even right about the correct way to pronounce MØ? Is Solange still out there, simply dancing away? On second thought, the answer to the last query appears obvious. Solange is always dancing. 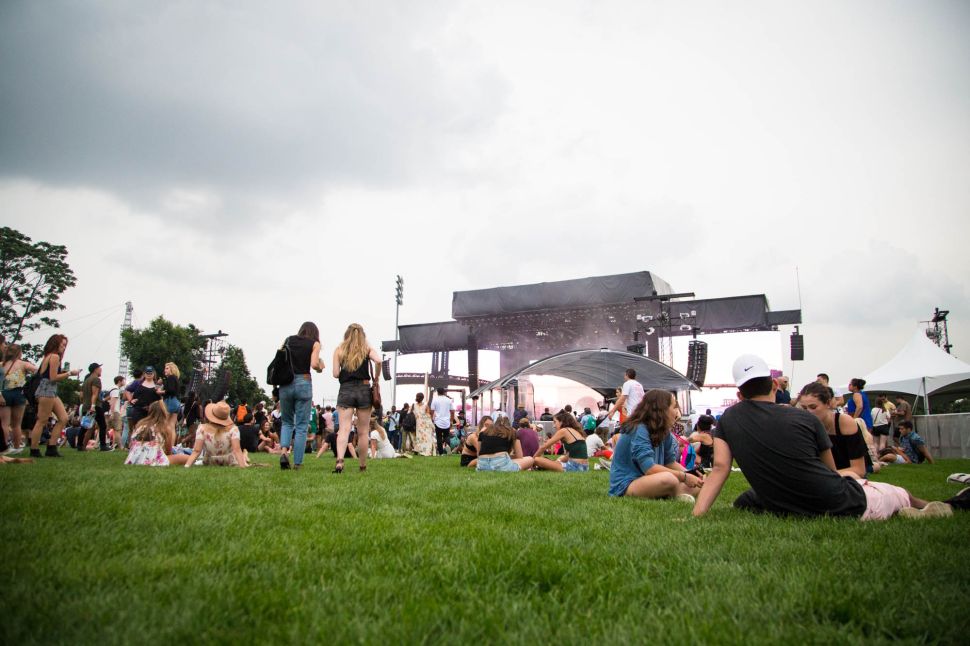