Squads who side plank together stay together #FableticsSquad

If you worked out and didn’t immediately post about it on social media, did it really happen? Maybe not.

Now that we’ve reached the full athleisure saturation point, it’s pretty hard to tell when someone is actually heading to a vinyasa flow class…or just really likes the feeling of the leggings from Carrie Underwood’s workout line. Which might explain why so many people are taking to Twitter to discuss the details of their workouts—and whether they like their post-workout drink to include a little charcoal or a little coconut. ClassPass, the subscription service for fitness classes and gyms, teamed up with Twitter and to analyze the online conversation about health, wellness and fitness, and they found some pretty crazy results. Well, alongside a few mundane discoveries, like how avocado is a huge topic.

One thing they found is that people are most likely to tweet about their fitness classes on Wednesdays, over any other day of the week. It just goes to show that we all need a little humblebrag on hump day, just to keep us going. However, on any given day, the highest volume of workout discussions take place between 10 and 11 a.m., in each timezone.

This Friday we're taking our usual party on a bike to the NEXT level 🌈🌈 We're celebrating @londonlgbtpride Rebel-style with two back to back sessions ft. glitter, glow-sticks, prosseco and serious performers 🎉You know the drill, we don't hold back. Hit up Ride at 17.30 with @joknow or Rumble with @danielmccarrolldmpt at 18.30, limited spaces left, get in QUICK #pride2017 #pridemonth #lgbt

Around the globe, Flywheel came out at as the most tweeted workout class; surely the studio’s new CEO, Sarah Robb O’Hagan, will be pleased with that news. The spinning studio was followed by the London-based “anti-gym” 1Rebel, which features a variety of classes—in addition to free beer.

New Yorkers obviously have strong opinions, especially when it comes to workouts that deserve to be tweeted about. Pure Yoga landed in the most tweeted spot, followed by Brick, a gym that offers classes with a focus on HIIT combined with rowing and running on treadmill—it’s not some workout where you throw bricks. Boxing continues to be the new trendy workout, as NYC locals are focused on tweeting about Title Boxing, followed by fellow boxing studios Rumble, Box and Flow and ShadowBox, all of which are popping up everywhere. Boxing gloves may soon be the new spin shoes.

Fast flats. Heavy hills. Epic races. Get ready for Tour de FLY from July 10-July 23! In this 2-week journey, challenge yourself to take 6 classes for an exclusive Flywheel water bottle to stay hydrated, thanks to our partners at @nuunhydration. Plus, the athlete who rides the most miles will win an exclusive T-shirt to celebrate their success! To be eligible, click the #LinkInBio, add the Tour de FLY package to your cart, check out, and get in it to win it 💪💯🚴🏻

If you want to know what everyone is wearing to their class, Nike is still holding strong, despite literally every retailer starting some kind of athleisure or sports line. The fitness giant was followed by other classic sports brands, including Adidas, Puma and Reebok. It makes sense, considering these brands are actually providing high-fashion athletic options, along with big celebrity names, like the recent Rihanna and Puma collaboration. You know, the one that somehow incorporated 18th-century France ruffles and bows into a tracksuit. And how could we forget about Kanye’s partnership with Adidas? Clearly, people really love their pricey sweat pants.

Another athleisure star on social media is Kate Hudson’s subscription service, Fabletics. The brand now has 1.2 million members and is slated to do $250 million in sales this year. Perhaps people love its message of female empowerment, or perhaps they still really love How to Lose a Guy in 10 Days. Lululemon is also capturing a lot of attention, with projections to reach $4 billion in sales by 2020, though Athletica and Sweaty Betty are holding strong as top brands on Twitter.

On the food front, activated charcoal is getting a lot of buzz on Twitter. Despite some reports saying too much of it is bad for you, people are all about it as a hangover cure, a toxin cleanser and a beauty product. Plus, now that it makes for a really cool looking ice cream flavor—which is clearly a direct response to all of our food being mermaidized and unicornized—it is getting a second summer wind. But don’t worry avocado lovers, people are still constantly tweeting about that vegetable. They did devote an entire restaurant to it in Brooklyn so avocados ain’t going anywhere.

Of course, and most importantly, the emojis that were used most when talking about fitness on Twitter included

. Again, if you didn’t put your workout on social media and use an emoji was it even worth it? 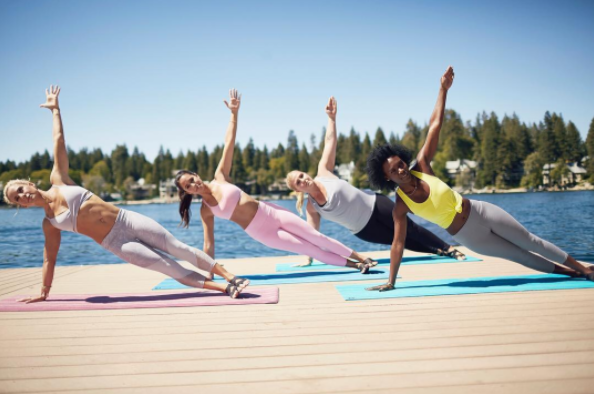