One of the most dedicated fanbases to ever exist is all thanks to Marlene King. Since its premiere in 2010, Pretty Little Liars has built a cult-following and attachments to the five lead Liars. Much like Sex And The City, it wasn’t uncommon to see people siding with one Liar over another. After seven years of murders, deaths, scheming and torture, the Liars were finally set free in the show’s series finale on June 27. Whether you were Team Aria, Emily, Hanna, Spencer or Alison, the finale, which included a ton of reveals, probably left you with a lot of questions. (SPOILER ALERT: Spencer being a twin, the significance of that Addison girl, what happened to the basement moms).

To ease your mind, we caught up with King about the idea behind A.D., tricking viewers, and wrapping up loose ends.

Observer: How long was the “Spencer being a twin” theory in the works? Was it from the beginning?

MK: It wasn’t something we planned from the beginning of the show and was actually partly inspired by the fans’ wanting A.D. to be one of the Pretty Little Liars (PLLs). We knew that wouldn’t make sense because they would never torture themselves. But, in a practical sense we knew that it had to be one of our series regulars so that we didn’t risk not having access to that actor when it came to shooting the finale episodes. So, as we started mapping everything out, we realized that the closest thing we could do to having one of the PLLs be A.D. is for one of them to have an identical twin. Sara Shepard [who wrote the book series Pretty Little Liars is based on] also had included multiple sets of twins in her books, so it was also our way of paying homage to that. We hinted at twins and played with twin theories throughout the show, so it felt like a natural choice for the show when it came down to it.

What happened to the moms in the basement? I love that you brought that up again in the series finale.

Were people supposed to think that Emily’s mom was dying? It seemed like tragedy was about to strike.

Yes. That was a mislead to keep the audience guessing what Emily was hiding and to provoke Emily into pushing Alison for answers the night she spontaneously proposed in her Pug sweatshirt.

I think what’s interesting is how Mona (and a lot of the characters) are never good but never evil. What can we conclude by the end of the show?

For me, a lot of what made Pretty Little Liars special and what we wanted to highlight is the love and loyalty these characters have maintained for each other over the run of the series. In a world of mean girls and cyber bullies, I wanted to create a show where the lead characters put their friendships first and offer an alternative to the nastiness we often seen between teenagers. For me it was about showing how to promote friendship and kindness through choices and actions. Yes, at times their judgment was poor (“Liars” is in the title, after all), but that makes them human.

What happened to Aria’s brother Mike? He was so suspect for a while.

We wanted to get Cody back for the finale actually, but sadly he was working on another show and wasn’t available.

What do you see as the future of Pretty Little Liars? movie perhaps? Or is this the end?

Anything is possible. We like to say this chapter in Rosewood is done, but that doesn’t mean it’s gone forever.

I feel like Lucas’ ending was incomplete. What do you see him doing?

Lucas’ story really ended with Hanna in episode #716, “The Glove That Rocks The Cradle.” We found out he lost everything when he backed her fashion business, but it was worth it to him because he cares so much for Hanna. Their friendship was solid when he said goodbye. Lucas is probably the smartest person in Rosewood next to Alex Drake and Mona. He’s an entrepreneur and has probably invested in a startup company that’s making a ton of dough for him. He is happy and looking for love outside of the Rosewood city limits.

Jenna basically is the catalyst for everyone questioning if that’s really Spencer. Is she “good” in the end?

After the one-year time jump, between episodes 719 and 720, we see Jenna is working at Rosewood High school and helping disabled students. She is trying to give back to the community and be a good person. Alex rescued her from the blind school, so she could sense and smell Alex outside of Hastings & Hastings Law office. I believe she called Toby because she wants to make amends with him and regain his trust.

Do you believe Mary Drake was trying to protect Alex or Spencer in the end?

Mary Drake wanted to protect both of her children, but in the finale she was willing to risk her life to save Spencer from an axe wielding Alex.

Was there an alternate ending? Did you ever consider giving the girls an unhappy ending?

There were a lot of ideas that we discussed in the writers room and almost everyone had a version of the ending to pitch out. There were some that were darker and we even talked about a Silence of the Lambs ending where Alex gets away, then calls Spencer, and Spencer walks up behind her and shoots her. But, I’m a total romantic at heart and I felt like for Mona to win the game and for the girls to live happily ever after—that was the perfect ending.

When Spencer “wasn’t herself” in the earlier years and she thought she killed Alison, was that her or her twin? I’m gathering Alex came into the picture more recently.

Alex didn’t make her appearance on screen until season 7, but technically she was in season 6B as A.D.

Can you reveal some of the clues about the Spencer twin theory? I know there was the “A” in Spencer’s dollhouse room.

When Hanna thinks she’s dreaming [in the Season 7 premiere during her kidnapping ordeal] and Spencer comes to her and asks her about Charlotte, that was Alex Drake. She was the person prodding her and was “A” then—she was essentially trying to find out if Hanna knew who killed Charlotte. Then there was the time she was in the Hastings’ living room, wearing an argyle sweater, looking at the family photo album. And then she was in the airport with Wren, when Ezra stumbles upon them. When she kissed Toby goodbye after Yvonne is dead, and he’s leaving town, that was Alex Drake, and then when Toby comes back and he has the beard, they have sex….and they have sex in the finale too. Those [moments] were both Alex Drake.

So, what’s next for you? Season 2 of Famous in Love?

We’re hoping for a season two pickup for Famous in Love right now, and I’m also in development on a couple projects through my production company Long Lake Media that we’ll hopefully be able to tell you more about soon.

I feel like there’s a lot more to Addison. Does this open up for a second generation of Pretty Little Liars?

To use a famous Alison quote, “Wait for it….” 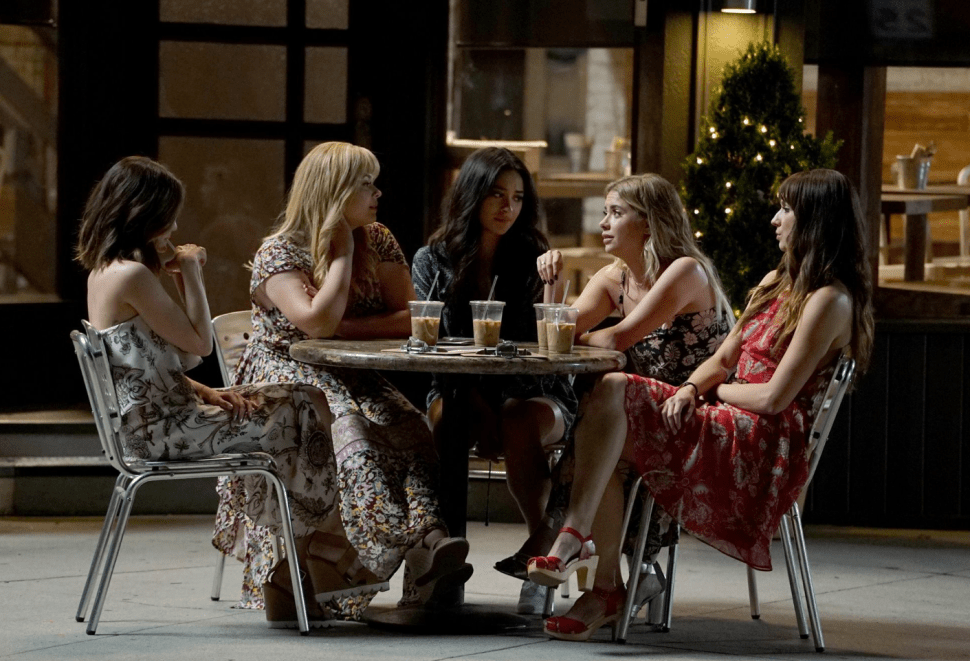