Sen. Rand Paul, my former boss, made me proud this week. He has become a one man wrecking crew in the Senate Republican leadership’s attempt to bail out Obamacare with a bill that neither repeals nor replaces President Obama’s destructive health care law.

Sen. Paul wrote earlier this week in Breitbart about the bill, which is titled the Better Care Reconciliation Act: “I miss the old days, when Republicans stood for repealing Obamacare.” He went on to make the case that “now too many Republicans are falling all over themselves to stuff hundreds of billions of taxpayers’ dollars into a bill that doesn’t repeal Obamacare and feeds Big Insurance a huge bailout. Obamacare regulations? Still here. Taxes? Many still in place, totaling hundreds of billions of dollars.” Paul points out the many flaws and proves this Republican bill doesn’t replace a destructive health care law that’s pushing America toward a single-payer health care socialist system.

Bloomberg News describes the bailout provision in the bill: “The $50 billion market-stability fund is intended to protect insurers that cover large numbers of customers with more costly health problems from having to raise their premiums for the next four years.” This provision is nearly identical to the Obamacare “risk corridors” provision that many Republicans rightly called a bailout. Yet, now it’s okay because Republicans are the ones proposing a bailout. The stated goal of the fund is to incentivize insurers to take on high-cost enrollees. In fact, this direct subsidy to insurance companies is better termed a massive bailout that will benefit insurance companies—not average Americans.

This is reminiscent of a Bush era fumble by the Republican Party in 2008 when they fully supported a bailout of Wall Street with the now infamous Troubled Assets Relieve Program (TARP). Many consider the TARP bill the spark that created the Tea Party and helped get members like Sens. Paul, Mike Lee and Ron Johnson into the Senate and Congressmen like Thomas Massie and Justin Amash into the House. The current health care bill may cause the Republican Party’s liberty minded base to respond with Tea Party-like activism and the recruitment of new Republican candidates who keep the promise of a full repeal of Obamacare.

The so called “Troubled Assets Relieve Program” (TARP) was a massive $450 billion bailout of investors during the subprime mortgage crisis. The Bush administration loaned billions of dollars to our nation’s biggest banks and investment companies. The goal was for the Federal Reserve to stabilize markets, but in January 2009 the New York Times reported, “An overwhelming majority saw the bailout program as a no-strings-attached windfall that could be used to pay down debt, acquire other businesses or invest for the future.” The same will happen with insurance companies. They will not use the money to help keep high-risk people on plans; they will use it as if it is a windfall with few strings attached.

Sen. Paul followed up his Breitbart piece with another in the Washington Examiner. In this piece, he argued that the Senate version of the Republican health care reform bill was the embodiment of cronyism. Paul wrote, “I remember a lot of outrage about two things when I first ran for office: Obamacare and the bank bailouts. Unfortunately, the Senate health care bill combines the worst of those two—this time, we’re bailing out the big insurance companies. Why? Partly because of the crony capitalism that pervades the culture in the swamps of Washington.” Sen. Paul is spot on. It’s outrageous that more conservatives in the Senate aren’t joining Paul’s crusade against Obamacare-lite.

In June, health care expert Mike Cannon of the Cato Institute made the case in the New York Post that this bill has put off cuts of some Obamacare spending in a way that makes it unlikely that the cuts will ever happen. Cannon wrote, “The Senate bill wouldn’t even repeal the parts of Obamacare Republicans claim it would. On paper, it would repeal Obamacare’s expansion of Medicaid—but not until 2024. There will be three federal election cycles, three new Congresses, and potentially a brand new president between now and then. It is almost certain Democrats will control at least one of those Congresses and could then rescind this ‘repeal’ as if it never happened.” Even this bill’s cuts are illusory and unlikely to ever happen.

Sen. Paul, thank you for being the one member of the Senate who is standing up against cronyism and a bill that fails to repeal and replace Obamacare.

Brian Darling is former Sr. Communications Director and Counsel for Sen. Rand Paul (R-Ky.).  He can be followed on Twitter @BrianHDarling 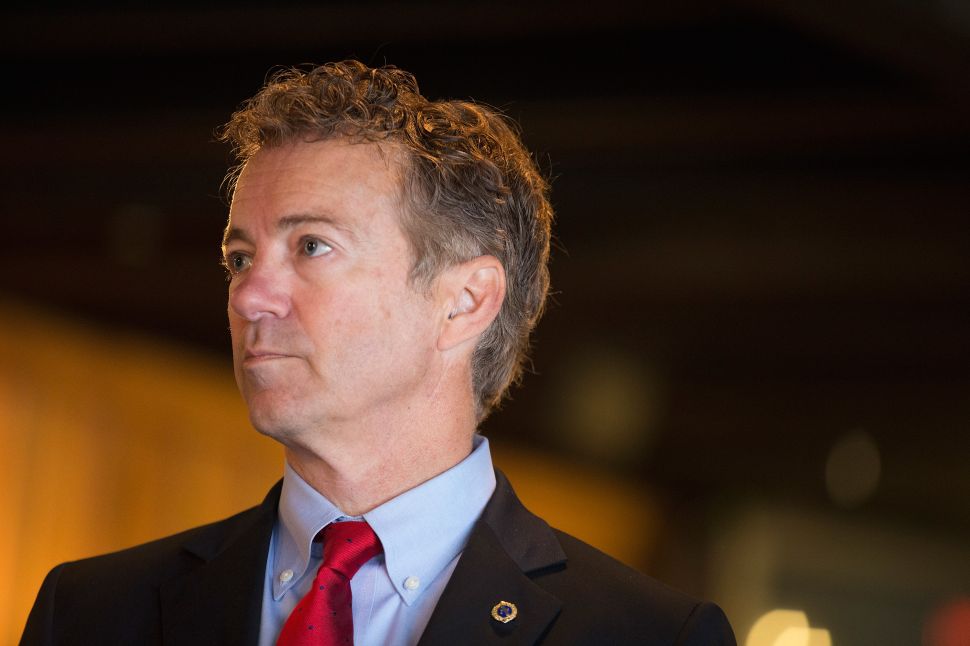