White House Press Secretary Sean Spicer resigned Friday morning after a six-month tenure in which he often went viral for all the wrong reasons.

Spicer told President Donald Trump that he was stepping down from his post because he disagreed with the appointment of New York financier Anthony Scaramucci as White House communications director. Spicer rejected the president’s offer of a position subordinate to Scaramucci.

The often contentious relationship between Spicer and the White House press corps began the weekend of the inauguration, when he attacked the media for accurately reporting that Trump’s inauguration crowd was less than President Barack Obama’s.

Spicer also put his foot in his mouth (and became an internet meme) in April, when he inaccurately claimed that Adolf Hitler didn’t use chemical weapons “on his own people.” As any student of history knows, millions of Jews were killed in gas chambers during the Holocaust. Spicer also referred to concentration camps as “Holocaust centers.”

And of course, who can forget when he literally hid in the bushes to avoid taking questions about Trump firing James Comey?

There were also smaller gaffes like Spicer habitually mispronouncing the names of foreign leaders. He was even criticized for his habit of swallowing gum.

Melissa McCarthy mercilessly mocked all of these character traits when she played Spicer on Saturday Night Live. In fact, when the news broke today, many people on social media wondered how McCarthy would feel about being out of a job.

The Spicer resignation story is an ironic case of art imitating life. McCarthy’s favorite target during her satirical briefings was Glenn Thrush of the New York Times, played by Bobby Moynihan on SNL. McCarthy-as-Spicer would often yell “Everybody hates Glenn” whenever the beleaguered reporter asked a question.

But Thrush got the last laugh today—he broke the news of Spicer’s resignation. 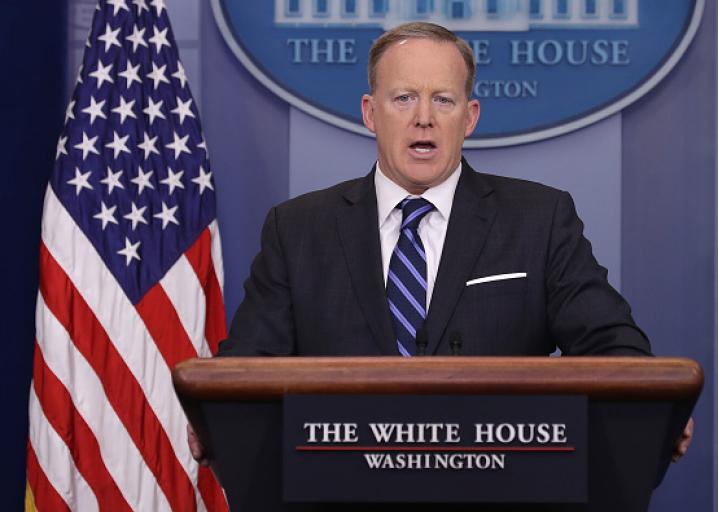