If you were the most popular person in Instagram’s history, how would you celebrate your birthday? Perhaps it would be replete with a $3,200 cake à la the ageless Paris Hilton, or maybe you would go the nightclub route in a $9,000 dress, like Kendall Jenner. Or, if you’re Selena Gomez, you simply pose with balloons in your kitchen for a low-key night with close friends.

Despite her fame, SelGo has always maintained a rather regular life. Her roommates aren’t members of Taylor Swift’s squad, of which she is an official member—though it’s unclear if said squad still exists, as Swift seems to have replaced them with her brand new British boyfriend. Instead, Gomez has lived with a realtor and a social media expert and the only truly famous person she is consistently snapped with is her boyfriend, The Weeknd.

happy birthday @selenagomez 🌹you're such a crazy special powerful being 🔥

Gomez turned 25 in the same way most post-grads do, wearing a hoodie and eating cake in her kitchen, with her friends snapping photos (although if her pals share the snaps, they’re liable to go viral, not just be passed around in group texts). Despite the fact that Gomez is currently the most followed person on Instagram, beating out her best friend Swift and her ex-boyfriend, boxer Justin Bieber, the photos are quite blurry, leading the folks at Man Repeller to question why people follow her at all.

While Gomez has been keeping a low profile lately, and has admitted to taking necessary digital detoxes for her mental health, she’s back in action in the days leading up to her rumored new album. She already released “Fetish,” a single featuring her signature breathy vocals and Gucci Mane. She even took a moment during her birthday to celebrate the single, posing with neon lights in a shot by her friend Petra Collins, who’s created most of the little girl lost imagery for the song.

This certainly wasn’t a Kardashian bash, although it did take place in Los Angeles. And unfortunately, her Hadid-approved boyfriend couldn’t make it, as The Weeknd was performing in Paris. But Gomez used the occasion for good by asking her devoted fans to donate money to support lupus research on her behalf.

Maybe that’s why she has so many followers—despite her Disney stardom and high-profile romances, she’s not always at the club or on the red carpet. Instead, she’s in her kitchen in a millennial pink hoodie, making her endlessly relatable. 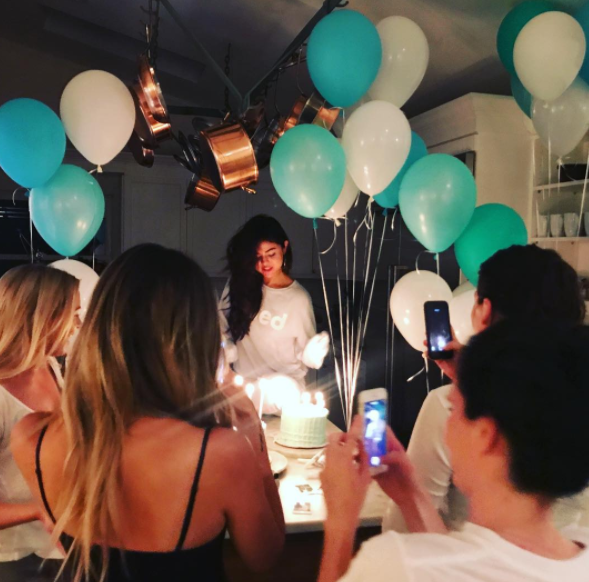