A few years back a gallery in Chelsea held an exhibition of works by Japanese artist Yayoi Kusama. In addition to a interactive installation where visitors were invited to place colorful stickers on any surface in a completely white room—ceiling, floor, tables, chairs, you name it—the galleries displayed a series of the artist’s spotted, large-scale pumpkin sculptures and paintings. Almost every work on view was a perfect opportunity for a selfie, between the vast array of bright rainbow hues that dotted her Obliteration Room and the nearly people-sized pumpkins that filled the galleries. But try squatting down and trying to capture your own face next to a blindingly metallic pumpkin without cropping the top of your head off, or worse—falling over. It’s a precarious task.

I say all this because earlier this month the worst case scenario did occur in Los Angeles, when on visitor attempting to snap a photo of herself with an installation titled “Hypercaine,” organized by Hong Kong-based artist Simon Birch and featuring the work of 20 other artists, fell backward into a row of sculptures on pedestals, knocking them one-by-one into each other like dominoes and causing nearly $20,000 in damage, according to Hyperallergic. To top it all off, the incident, which occurred at Birch’s pop-up exhibit the 14th Factory, was captured on camera and uploaded to LiveLeak and YouTube.

Watching the gallery attendant swiftly pace back and forth surveying the damage with his hands on his head in disbelief, while the woman who caused the incident attempts to correct the aftermath of her selfie-gone-wrong as best she can by trying to pick up the remains of the toppled pedestals and sculptures is painful. But, the video may also be the best possible PSA warning for taking selfies around very, very expensive art there is. As smartphones with incredibly powerful cameras have become more and more ubiquitous, and museums, art fairs and galleries have begun encouraging visitors to snap photos in exhibits, accidents have inevitably occurred—as the Observer previously reported.

So, what can you do to avoid buying a now-broken artwork worth thousands when you accidentally took one wrong step trying to snapchat next to it? Be careful fellow art lovers. Or, even better, leave your phone in your bag and just enjoy art IRL.

The 14th Factory is up through July 30 in Los Angeles. 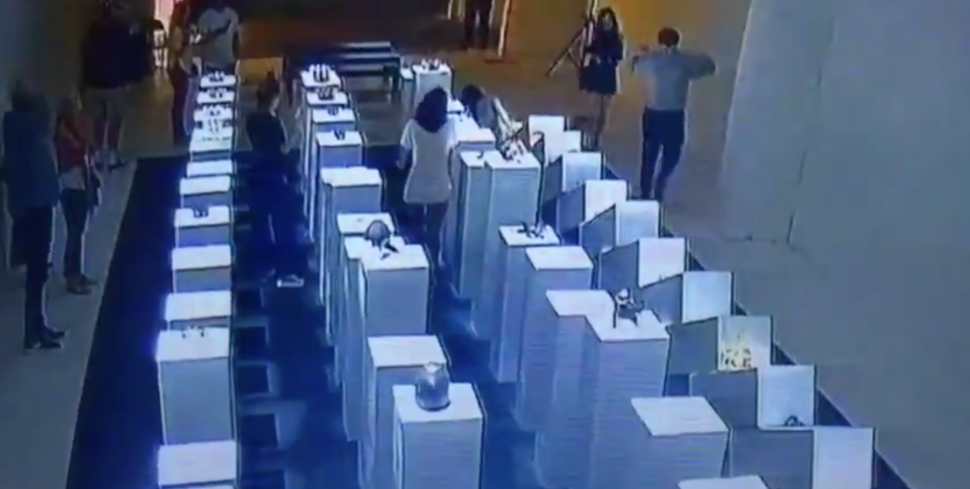