During his career, Eric has been by the side of numerous other high-profile politicians—his work became prominent in the Al Franken’s 2008 Senate race in which he became known as the “28-year-old bomb-thrower extraordinaire.” He’s the person that helps them spin their agenda yes, but also prevents them from spinning into unnecessary battles and arguments that have nothing to do with agenda. Eric began his career nearly two decades ago as an opposition researcher and tracker on Hillary Clinton’s 2000 Senate campaign, so he has seen a lot.

I reached out to him how has he seen the media world change since and to get the scoop on how the game is played (and how to stay sane while it is being played around you). We explore this and much more in our interview below. Enjoy!

You first started working in the political communications world in 2000 working for Hillary Clinton’s U.S. Senate campaign. Thinking in terms of how the media landscape has evolved, what do you think the biggest changes have been? How has that changed how the job gets done in your line of work?

Let’s stipulate that reporters are now working as hard as they ever have, producing coverage that has never been more important. A vibrant press corps is one of the country’s guardrails to ensure our democracy does not go off track, and given the challenges journalists today, we should be grateful for their nonstop pursuit of the truth. That said, there’s no question that the fragmentation and velocity of media has dramatically changed how people consume their news. The fragmentation is self-evident as are its impacts. But I think the pace by which news is produced has had unintended consequences that warrant some reflection. Reporters are under fierce deadlines to produce content – which does not always allow sufficient time to think through stories, speak with experts, process competing views, and talk to a range of sources. This is not my observation – but a complaint I hear from journalists all the time. We live in a world where speed is often prioritized over everything else.

It’s interesting to me that in the 1980s, political scientists were talking about the CNN Effect and how 24/7 news would change policy. I don’t think they could have imagined 24/7 X millions of blogs and social media. I’m curious what you think the relationship between policy and the media ecosystem have become. Does it change how politicians think and act? For better or for worse?

You cannot overstate the effects of the 24-hour news cycle on Washington. The more outrageous you are, the more likely you are to get attention. Nuanced, thoughtful answers don’t make for great cable news guests – but punchy, dramatic, and over-the-top statements certainly do. The more hyperbolic a critic’s soundbite, the more likely it will get headlines. The press loves to focus on scandal and dysfunction. When FEMA screwed-up a storm response, it warranted breathless, around-the-clock coverage. When the Federal government swiftly and effectively responds to a storm, there’s hardly notice. When healthcare.gov didn’t work: non-stop coverage (fairly, in my opinion). ACA saving people’s lives: sporadic coverage, at best. The threat of Ebola spreading to the US: DEFCON ONE. The effective effort to build a new global health infrastructure from scratch to contain it, treat it, and stamp it out: meh. This is not a new phenomenon (free-flowing traffic on the highway is never newsy), but today’s media environment dramatically exacerbates the problem. This breeds a cynicism that has a profound impact. The obsession with scandal erodes confidence in government, and leadership at large. If all you hear about is bad news, why have any faith that any institutions are working the way they should be?

In my book, I talked about this concept of trading up the chain—how little blogs influence bigger sites which get picked up by TV. While lots of fake news is spread this way, it’s also how opinions are shaped. I think Ben Rhodes got in trouble for alluding to a similar phenomenon in that New York Times piece. When you look at making an announcement or getting a story out there, how do you think about where to go? It’s not just sending out a press release or a press conference these days.

We used to live in a world where most Americans got their news from one of three white men delivering it to them at 6:30 PM every night. That’s just not the case anymore – and of course websites shape how traditional outlets decide how and what to cover. I constantly receive calls from reporters from mainstream outlets checking on items from various websites. There’s no one-size fits all approach to making news. At the White House, we experimented with a range of strategies: making our news via our own channels (not a favorite amongst WH press corps), preview stories with reporters with subject matter expertise, conference calls, embargoed leaks, authorized briefings, bringing a principal to daily press briefing, etc. I believe a successful communications operation will always innovate. Not every rollout will be a homerun, but the “we’ve always done it this way” mindset is a recipe for getting left behind.

I’m always a bit appalled when I hear the media talk about “narrative.” As if it is this thing they have nothing to do with. It’s like they’ve stopped caring what facts are, only what their reaction to facts is. They talk about spin…and then they have people on (surrogates) whose sole job is to spin! Is there anything you think the public can do about this?

This is where the democratization of the media has helped. For any mainstream narrative that’s developed, there are surely voices surfacing to fight it. As news consumers, you get to vote with your remote control, subscriptions, social media, and clicks.

You still work for former President Obama. What’s the biggest difference in handling his communication with the media as a private citizen vs. when he was President? Are you guys approaching it differently?

There’s no role or institution on the planet that warrants the scrutiny that the White House does, and rightfully so. Of course the stakes are lower now, as are our resources. But like so much of President Obama’s entire career, there’s a lot about this particular post-Presidency that other former Presidents did not experience.

As someone who spends a good deal of his time making or influencing the news, what does your media diet look like? What are you reading on a daily basis?

In general, I read the typical stuff. In my professional capacity, I try to prioritize what people outside of Washington are seeing: in their local newspapers, on their local stations, and on network television news. I also have a huge bias for outlets (across any media) that do long-form, substantive reporting.

Without getting too much into the current political situation, I’m curious if you have any thoughts on how ordinary people can sift through the faux-outrage and the truly outrageous. There are so many people and publications all vying and fighting for attention, it’s become extraordinarily difficult for people to know what’s important and what isn’t—what to go to the barricades about and what to shrug off. Have you figured this out at all?

This is challenging. So much of what we see online is obsolete within a few hours. I do fear that some of the sensational coverage of our White House diluted the definition of scandal for the mainstream audience. If the wrong stairs greeting on Air Force One at the Hangzhou Airport generates multi-day coverage, then we start to lose perspective. Stories that are now punchlines, like the Energy Department’s failed loan to Solyndra and the Justice Department’s botched Fast and Furious operation, were considered A-1 scandals at the time. The Obama White House was often accused of crimes rising to the level of Watergate. At some point, I lost track of how many Katrina’s we had.

My boss at the White House had a mantra I thought was useful: always separate the signal from the noise – that could be a good strategy for viewers, too.

Note: You can find Eric on Twitter @EricSchultz and at schultzgrouppr.com. 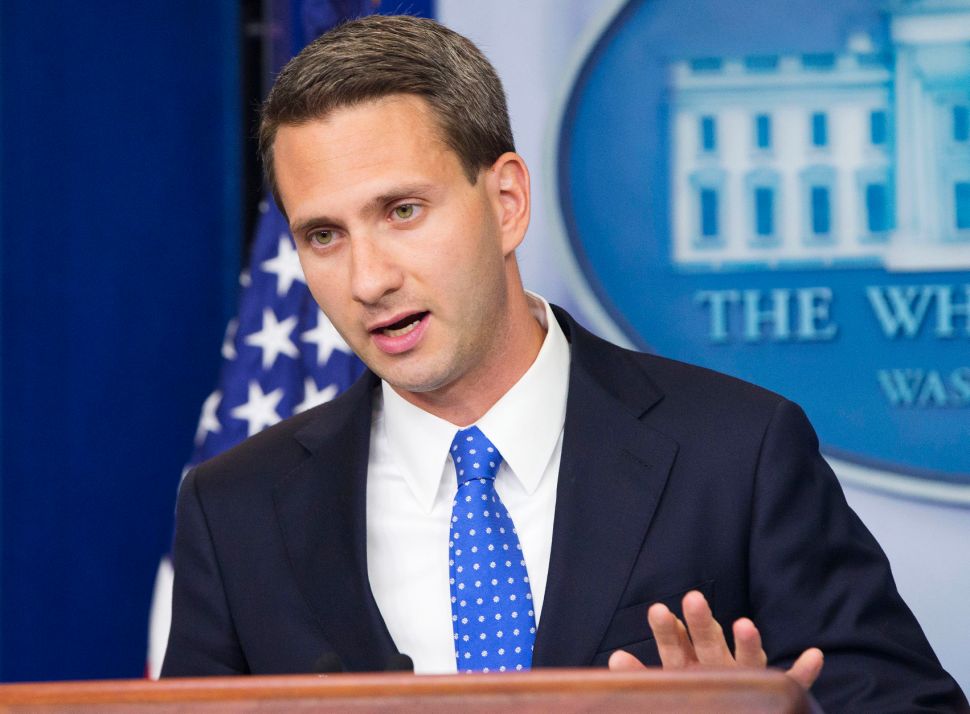