Welcome to our TV Fashion column, where TV Ate My Wardrobe‘s Emma Fraser discusses the trends in television apparel. This week: a reflection on the summer couture of Preacher.

After only two episodes of Preacher had aired last year I made the bold claim that Ruth Negga’s Tulip was the TV style icon we needed and the second season doubles down on this sentiment. In that original article the focus was on sunglasses and there’s a summer fashion angle here too; it is July after all. And once again this post is based on the TV show alone and this incarnation of Tulip, as I have not read the source material.

Since Preacher first premiered, Ruth Negga has done the film award season circuit after a stellar performance in Loving and she showed her sartorial chops in a variety of gowns including liquid gold looking Louis Vuitton, dramatic floral Delpozo and a show-stopping custom red Valentino at the Oscars. Not to mention the very Tulip blend of leather Miu Miu with a super feminine spin that has me wondering if super stylist Karla Welch is also watching Preacher. Because award season stretches over several months in can mean seeing the same faces rocking up in a lot of very similar dresses; one of the reasons why Negga appeared on so many Best Dressed lists is because she didn’t play it safe in the same color palette or silhouette. The same can be said for Tulip.

Tulip’s wardrobe is a mix of hard edges with soft touches; a leather jacket over a white summer dress that is going to get ruined by blood or a floral top with jeans that she doesn’t get married in. Tulip has agency and isn’t here for the ride just to be a romantic foil and the mix of delicate with tough fabrics reflects these aspects. Jill Ohanneson takes over the costume design reins from Karyn Wagner for season two and the premiere follows on directly from where we left off, with Tulip in the super pretty white dress with a chartreuse trim.

A barrage of gunfire doesn’t give Tulip time to remove her clear perspex heels as she did with her orange wedges pre neighborhood run in the season 1 outing “He’s Gone,” but she takes an impressive and non-ankle breaking leap. Tulip’s resourcefulness also extends to siphoning gas with the body parts littering the road, which is also to blame for the ruining of her dress. One drawback when wearing white in the world of hyper-violent Preacher. Other items of clothing are also ruined by bloody encounters including the black and white shirt she changes into for what turns out to be a called off wedding.

Leather jackets in various lengths, styles and colors make up the bulk of Tulip’s outerwear and this might not be the first item on your summer must have list. But for those evenings spent outside the inevitable drop in temperature gives a good reason to wear leather. I’ve been talking about getting a leather jacket for so long and when I do finally invest in one, Tulip and Ruth Negga will have to get some of the credit. Part of this is seeing how to style it with pretty much anything; whether it’s a crop top, summer frock or tee. Color isn’t the only way to mix things up and Tulip’s even got a floral embroidered number to match her botanical-sounding name.

Flower motifs are repeated throughout her wardrobe including another summer ‘must have’ that is ideal for day-to-night transition; the silk bomber jacket. Last spring saw an influx of this style on the runway, which continues to dominate a year later and there are plenty of options from the affordable to splurge-worthy. In the same way leather adds a hardness to a Tulip ensemble, this injection of soft patterned silk over skinny jeans, a tank and boots adds some glam. There’s an effortless to Tulip’s styling in the way she blends different styles and pieces. The bomber jacket even makes the character promo shots for this season along with an elegant off the shoulder sequin frock and a super sexy black chemise paired with a delicate patterned bathrobe (and we all know how I feel about robes).

A ‘50s full skirt silhouette doesn’t scream toughness and yet Tulip brings this angle; Tulip is the love interest, but she is also very much her own character with a past we are only just starting to find out about. A past that is causing her to really layer up in a hoodie (hood up) and denim trench as soon as they arrive in New Orleans. By the end of “Damsels” Tulip seems to accept that she can’t hide underneath all that fabric and next week’s episode looks set to give more information about what Tulip has been up to before she came back into Jesse’s orbit.

Tulip has you covered when it comes to summer frocks and off the shoulder crop tops paired with dreamy New Look adjacent skirts; both of these don’t suggest action star and yet we have seen Tulip sprinting and leaping in these ensembles. Ruth Negga is petite, but she dominates the screen. She can handle herself with a heart-shaped paddle, while contemplating a quickie wedding and even as she confronts her past head on (with her hood still up) at the end of this week’s episode. A damsel in distress she most certainly is not.

She even manages to do the ‘wearing your boyfriend’s button down shirt after sex’ without looking cheesy. Yes her boyfriend is a preacher who’s black shirt happens to have metal collar tips and that gives it an edginess from the outset. Also the borrowing a boyfriend’s shirt while still in bed makes more sense when they are in a random hotel room and not a house where more comfortable options – such as actual T-shirts – are readily available.

It is worth noting that Jesse’s wardrobe is limited to his preacher attire whereas Tulip and Cassidy have a variety of outfits at their disposal. Considering how nomadic both these characters are, living out of suitcase (or sack in Cassidy’s case) makes total sense, even if Tulip’s jacket collection appears to be never ending. There is plenty of room in the trunk of her car for outerwear though and you never know when a denim trench will come in handy.

As demonstrated by the Preacher character promo shots you could say there is a different Tulip for every occasion and yet there is a clear throughline in her costuming from the very first episode. Leather is just as vital to her style as florals and Tulip is someone to look toward for sartorial inspiration not just summer, but the rest of the year. 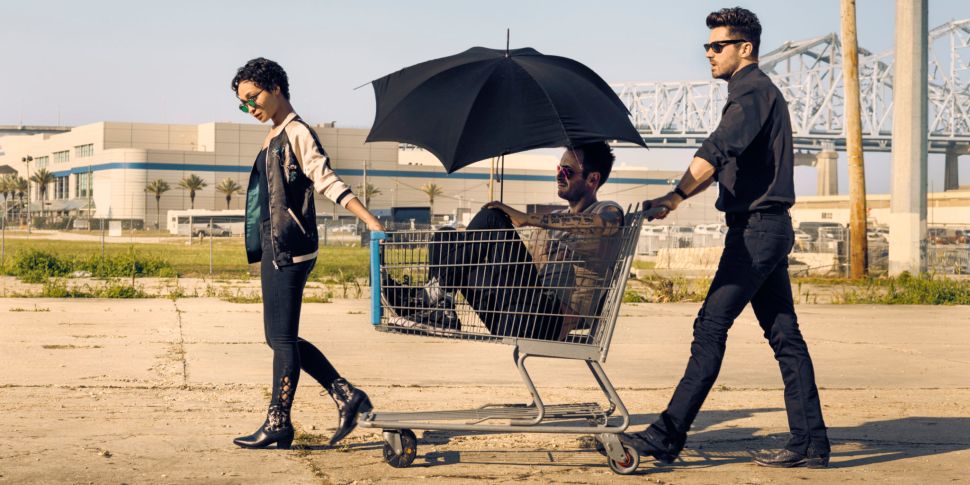