In the hospital Kevin’s still reeling from doing a little killing of his own—killing his brother, Mike. Adrian overhears a nurse talking about how the hospital is now having a slight problem with people just up and vanishing, which is, like, the last thing you want to happen in a hospital. Or second-to-last, I guess.

Back at the mall, Alex and Eve are reeling from the young girl being killed by the Mist monster. Although Alex is mainly focused on why the Mist Monster didn’t kill Alex. C’mon Alex, just be grateful you’re still alive.

At the church, Nathalie is getting weirder and weirder and the priest is getting more and more pissed about it. Unfortunately for him, Nathalie is starting to win over converts in the congregation to her cause. Nathalie theorizes that the Mist is basically nature’s way of cleansing the human population for the destruction we’ve done to the environment, which feels like a pretty valid theory. Also, fair enough, Mother Nature. We deserve it.

At the hospital Adrian and the guy he had a sexual encounter with in the last episode have an awkward so-we-just-had-sex-huh conversation. Kevin, Adrian, and Jonah then discover that Mia has stolen the jeep and taken off. No one’s happy about this. This is also the first time I’ve noticed Adrian is wearing a T-shirt with a big “666” on it, which is about par for the course, given this show’s lack of subtlety. We find out that Mia has gone to break back into that house she broke into in the pilot episode. Kevin, while snooping around the hospital looking for a car (I know this doesn’t make much sense but it’s what he’s doing) discovers that patients aren’t really disappearing from the hospital so much as the head surgeon is kidnapping and doing experiments on them to try to find some kind of “cure” for the Mist. I’d just like to point out, again, that in the show’s timeline the Mist just started like seven or eight hours ago, tops. I get that people do strange and unexpected things when pushed to their limits but, man, everyone on this show is firing on all cylinders.

At the church, Link (a loyal acolyte of the priest’s) decides to take it upon himself to beat Nathalie to death, or until she repents her heresy and accepts the Lord. Nathalie manages to get the upper hand on him (it’s ridiculous how this unfolds) and locks him in the church attic alone with some Mist. Uh oh.

Speaking of being locked in a room alone with some Mist: The surgeon ties Kevin up, injects him with something, and locks him alone in a room with Mist. I guess to see if the Mist kills him or not. After a couple minutes of Kevin hallucinating but not getting killed, Jonah and Adrian save the day and free Kevin. This involves Jonah stabbing the surgeon in the neck, making him the second person Jonah has killed in about half an hour.

While Alex is looking for supplies, someone locks her in a room and sets the room on fire. Geez! Who saves her at the last minute, but Jay, her accused rapist. Alex then accuses Jay of setting the fire himself so he could then pretend to save her. He swears he didn’t do it. This is not the show’s finest hour, truth be told. Eve stumbles upon the situation unfolding and also accuses Jay of setting the fire. She has some choice words (and threats) for Jay over it.

At her home, Mia sees a vision of her dead mother, who appears very sweet and apologetic for not being a better mom when she was alive. But it’s all a ruse because this is The Mist we’re talking about. Sure enough, Mia’s mom pivots to trying to convince Mia to kill herself, and when Mia refuses, mom tries to take over. She fails and Mia returns to the hospital just in time for the generators to go out and the electric doors—which had been keeping the Mist out—to all open in unison, letting it barge in. We close with Mia, Kevin and the gang watching it roll towards them.

During all of this Eve and the mall manager have been concocting a plan. Their bright idea is to fabricate a bunch of flyers from the National Guard saying that help is on the way, then dump the flyers outside so the others in the mall will find them and think that help is on the way (even though it isn’t). This is a bad and crazy plan in a show full of bad and crazy plans.

One last thing: It should be noted that every character on this show calls the Mist “the mist.” They have to, because this show is called The Mist. But the distinction between a mist and a fog is minimal. I for one would call it a fog if I were on this show. Point being: It’d be more realistic if, like, half the characters said stuff like “We have to get out of this fog!” But, branding being what it is, “the Mist” appears to be its unilateral label. 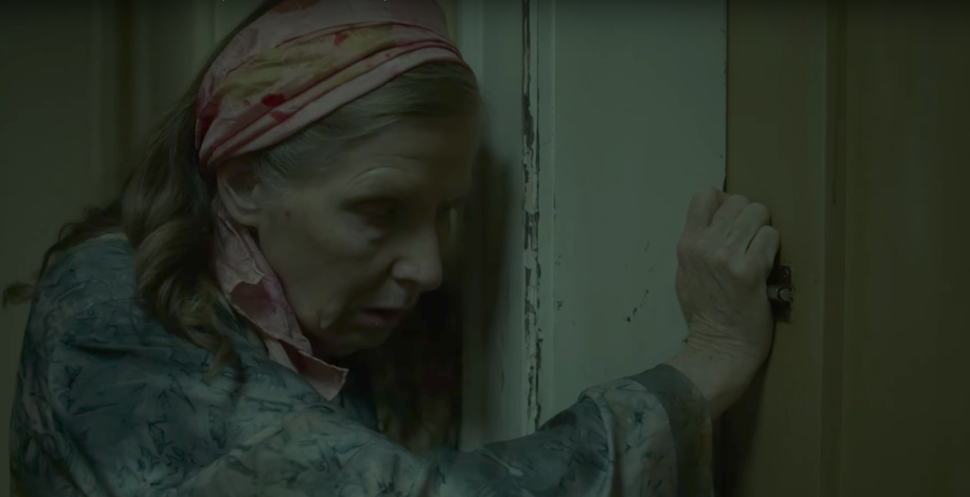