We ended off last episode with Bethenny snapping at Tinsley. Bethenny can be as dramatic as the rest of this group, but when it comes to real issues, she’s an internalizer: she shuts down and lets her crap build up until it threatens to overwhelm her. And so when somebody complains about an issue, it triggers Bethenny, who then channels all that pent-up emotion and showers her rage upon whoever dared to complain.

But Bethenny, for all her faults (and there are many), actually understands what it means to properly apologize. And she knows when she screwed up. So, as Ramona bustled about the kitchen like Suzy homemaker, as Sonja got her beauty rest up in Dorinda’s room (she gave it up to please Laverne & Shirley), Bethenny pulled Tinsley aside to apologize.

Bethenny knew she made it about herself, that she didn’t validate Tinsley’s pain. And so Bethenny acknowledged the hurt she inflicted and that it was a really shitty thing to do. It’s a far cry from the “apologizer” Ramona, whose concept of forgiveness is stuck in preschool where an apology makes all the bad that you committed magically disappear.

People like Ramona can’t handle not being forgiven. Ramona is so self-centered that her apologies are often self-serving: there’s no validation, no understanding that a person might not forgive. She is constantly vacillating from a prostrating, apologetic stance to a resentful, angry attitude because she never actually believes she did anything wrong. Her apology is an act, and the resentment emerges from having to keep up the act.

And so it’s no wonder that Ramona has channeled a stepford housewife and made an elaborate spread for breakfast. The breakfast is part of a performative self-flagellation, a way to signal to Bethenny that Ramona can be a good person and that Bethenny should not exercise her power to kick Ramona off.

But because it’s an effort that would always be doomed to fail, Ramona began acting like the unappreciated mother — the woman who slaved all day in the kitchen cooking and cleaning. The woman who does so much yet doesn’t even get a simple “thank you” from her ungrateful children. She took the “unappreciated mother” trope with her throughout this episode: she organized a fancy dinner (on Bethenny’s dime), she does Sonja’s hair.

But, once they made it to the slopes, Ramona took on a new role: that of cougar-in-chief. She hired a young, hot ski instructor (giving the older guy, not-so-hot ski instructor to Sonja). He wasn’t really there to instruct her, since Ramona knows how to ski just fine. He was there to hold her skis, to get her stuff, to be the boy-toy to look at and flirt with. And as the day wore on, he became the hired help, bringing Ramona and crew drinks at the lodge. She treated him like he was her personal property, getting as possessive over him as Sonja gets over Connor; when Dorinda talked to him because she was excited to find out that he’s from the same area that her Berkshires house is in, Ramona cut in to instruct him to get her a drink.

As Ramona exercised some classic midlife crisis symptoms, Bethenny continued to internalize her own crap. On the gondola going up the mountain, she kept her Skinnygirl-branded snowboard next to her face instead of hooking it on the outside like everyone else. It was obnoxious, sure. It was a moment of in-your-face-advertising, like in some overly commercial blockbuster film. But it also felt like like her armor and shield against all the crap going on in her life. She even expressed liberation, even freedom, as she wound her way down the slope, the soft Vermont snow trailing behind her.

And it was nice to see her in that moment of happiness, especially when Carole told Dorinda (and us) what’s really going on: how her ex, Jason, gaslights her, and that he had just gotten arrested for stalking because he threatened her at her daughter’s school. It was even in Page Six. But on the slopes, Bethenny doesn’t yet know that it’s in Page Six. She was deliriously, thinking she escaped all her pain and suffering, even if only for a brief moment.

And when she does finally find out, after her liberating run on the slopes, she gets pensive and anxious, biting her lip and is oddly quiet. Nudniks like Ramona try to pry, but Bethenny shut it down fast. You had the sense that Bethenny was an island unto herself, alone even as the crowd gathered and laughed and celebrated.

Even as Bethenny dealt with the fallout from her ex’s arrest, Sonja continued to “transition” to Luann’s marriage. Yes, it’s a little ridiculous that she isn’t over the whole Tom thing, but here I have compassion for Sonja. Sonja has major abandonment issues: it’s why she’s acted like a royal tyrant to Tinsley. She needs to feel needed, but Luann doesn’t need her anymore. And it hurts.

Besides, Luann’s constant need for people to apologize to her over not being perfectly happy for her is getting a little ridiculous. Sure, Sonja should get over it already. And sure, they’re forced to interact because they’re colleagues on a show. But Sonja is just expressing herself. Luann is overly uptight about the whole thing.

But Luann has been getting overly uptight in general lately. Compare her to last year, before she met Tom: she was awkwardly earnest, hoola-hooping at Bethenny’s Hampton house to ingratiate herself with everyone. She tried to be blasé when issues would come up, even coining the phrase, “be cool, don’t be all…uncool.”

And then she met Tom and became the deliriously happy Luann, the kind of woman who gets upset when they realize that the whole world doesn’t revolve around their happiness. She was constantly defending her relationship, against all odds. And even though Tom is a slimy, swarmy jerk, I give her credit for not allowing the “haters” to dictate her happiness.

But now, she’s married. She’s no longer fighting her way to the altar. And so she’s back to the Luann of old, the snooty Countess Luann of Season 1. Even her mannerisms are different. Her voice sounds vaguely foreign, with a hint of an upper crust accent. Her tone is very mistress of manners, scolding little girls for bad behavior, forcing people to apologizing over minor infractions as she swats her stick and pushes her spectacles up the bridge of her nose. She’s not even so funny anymore. Her attempts at humor fall flat on its face: her joke about the skinnygirl tramp stamp was very “eh.”

Later in the episode, when Ramona gets a five-star chef to make them dinner back in their log cabin, they play a game of Truth-or-Dare. And as Luann heard the women be truthful about their sexual encounters, she expressed shock and relief at being married, unlike everyone else at the table. And she was judging everyone.

Because Luann is MARRIED. And being MARRIED in her brain has somehow de-sophisticated her sexuality, shocked by the escapades of the women around her. But Dorinda wasn’t having it. And Dorinda, who has, by now, had a few drinks in her, does the unthinkable: she called Luann out for lording her marriage over the group. And Bethenny, who seemed over Luann-related drama, especially with her own crap going on, does the unthinkable: she called Dorinda out for calling Luann out because it isn’t as if Luann had such smooth-sailing going into her marriage.

Dorinda was shocked, because it seemed to be an about-face for Bethenny. Dorinda, who has, until now, been Luann’s closest friend, the only one invited to the wedding, is the only one allowed to be honest with Luann and tell her off because she’s so close to her. And she’s used to having the women agree with her when she does call out Luann because they all hate Luann. Now that Bethenny refused to fall in line, to go with the circumscribed flow, Dorinda is pissed. In the careful politics of friendship on this show, Bethenny upset the balance, pushing Luann closer to Bethenny’s arms and further from Dorinda’s.

It’s Dorinda’s dream to be the official peacemaker. The proof is in her own words: “I’ve been your biggest supporter since the beginning.” But Luann knows that, and says as much.

Even so, Dorinda was nervous that Luann will view this as a betrayal, and that’s the last thing “everywoman” Dorinda wants. Besides, Dorinda was clearly inebriated (or drugged out of her mind, allegedly), and so all her senses are heightened. She saw the look of disapproval on Luann’s face (which, surprisingly, Luann copped to) and she was afraid that she ruined it all, that she committed a cardinal sin. And although Luann assures her all is well, even as Carole gives a lovely toast, the air is tinged with tension and muted aggression. The tension was evident in the “mean” toast by Sonja, in the slurred-words of Dorinda, in the condescending creases of Luann’s pinched smile. Dorinda didn’t feel steady, she wasn’t centered. And as she watched Luann’s face lose its warmth, as she saw Luann express feelings of friendship with no love or emotion, Dorinda knew that this incident will bite her in the ass in due time. 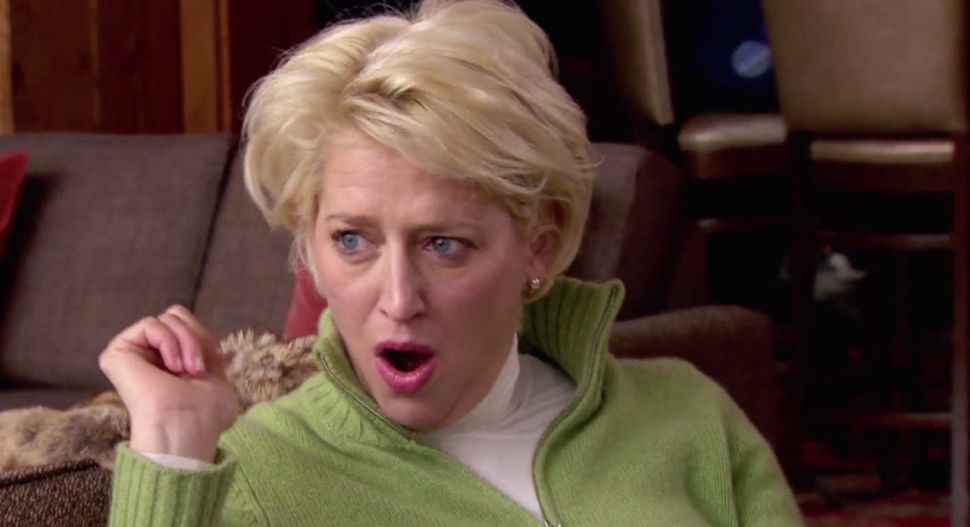