Now in its thirteenth year, the New York Music Festival is a boon for those seeking edgy, off-the-wall, or campy shows that might not be ready for the Great White Way but are still a hell of a lot of fun. I’ve attended NYMF for several years now and found its varied fare to be charming and refreshing.  Where else can you witness musicals about a high school Houdini, Oprah Winfrey, accidental clones, and zombie strippers?

NYMF 2017 starts Monday, July 10 and runs through August 6, encompassing 20 musicals, 14 concerts and beta musicals (i.e. shows in development), and 10 readings, along with select workshops and classes. It’s a musical lovers’ dream, spanning the serious to the silly, high to low art, and productions of varying sizes. The festival has been streamlined over the years so that all of the main shows are now presented in two main theaters on W. 42nd Street between 9th and 10th Avenues. You can even catch two or three musicals in one day if you coordinate it right (but book in advance since many shows sell out fast).

At a time when Broadway prices have spiraled to crazy heights, the $27.50 ticket price for a NYMF show is very reasonable and allows you to take a chance on a new musical you have not heard of. Some are great, some aren’t – and some have been performed before while others are brand new – but the cast and crew of each show give it their all every night. These people are doing it more for the love than the bucks; many of them are Broadway or off-Broadway vets adding some spice to their life on a smaller scale. That said, Chaplin, Next to Normal, [title of show], and In Transit all graduated to Broadway from past NYMF seasons, while 17 off-Broadway musicals, including Altar Boyz and Clinton The Musical, have also emerged from the festival.

This years crop of NYMF picks look promising. Following is a breakdown of buzzworthy productions. You can peruse the entire list here.

THE CADAVER SYNOD: A POPE MUSICAL – This musical features “pope-punk” and Catholic pop and recounts a late 9th century trial in Italy during which Pope Stephen VII placed the rotting corpse of his predecessor, Pope Formosus, on trial before the entire Roman Clergy, Senate, and Aristocracy. In real life, the goal was to declare the previous Pope’s reign illegitimate, among other things, but I suspect this musical takes it father than that. Screaming at a corpse in court? It sounds like the perfectly crazy premise for a batty off-Broadway show. (July 17-23, The Acorn Theatre at Theatre Row)

FREEDOM RIDERS: THE CIVIL RIGHTS MUSICAL – Winner of last’s Beta Award from NYMF, the new production of this show presents the true story of Civil Rights activists and icons who took on the Jim Crow South by riding interstate buses at a time of extreme segregation. You’d think a story like this would relegated be to history, but it seems like America still has some growing up to do, making this show very relevant. (August 1-5, The Acorn Theatre at Theatre Row)

THE GOREE ALL-GIRL STRING BAND – Inspired by a true story, this musical chronicles the lives of several women who, behind bars for various crimes at the Goree unit in Huntsville, Texas, teach themselves to play music and become local radio stars in 1938. It’s a tale of musical redemption and sisterhood performed by a capable cast of actor-musicians.  In real life, the group, also known as the Goree Girls, were indeed a popular act, but the catch was that they were beloved for succeeding behind bars. Once some got out, what happened in the real world? Perhaps the musical will address this. (July 24-29, The Acorn Theatre at Theatre Row)

MATTHEW MCCONAUGHEY VERSUS THE DEVIL – Are you one of those people who wonder how the hell Matthew McConaughey won an Oscar? If you are, this show is for you. Despite the presence of his loyal agent, his best friend Woody Harrelson, and bongos in his life, the Southern thespian wants to be a serious artist, and a devilish pact may be just the thing he needs to make that happen, if his soul can take it. Co-star Lesli Margherita, who plays Mephistopheles, won last year’s Best Actress for the NYMF comedic horror musical A Scythe of Time, and she was an original cast member of Broadway’s Matilda. She’s worth watching alone. (July 10-16, The Acorn Theatre at Theatre Row)

MY DEAR WATSON – Sherlock Holmes and Dr. Watson have always had a complicated relationship, with the latter showing loyalty to a man who usually comes off as cold and insensitive to outsiders. What did Watson see in him that others didn’t? Jami-Leigh Bartschi’s musical is told from Dr. Watson’s perspective, with his famed friend portrayed by the director, John DiDonna. I love that DiDonna created a Orlando-based steampunk storytelling troupe called Phantasmagoria. That bodes well for this show. (July 11-16, The Peter Jay Sharpe Theatre)

NIGHT TIDE – I would not have expected the 1961 B-movie starring Dennis Hopper and Linda Lawson to be turned into a musical, especially as it had more promise than it delivered, but life is full of strange detours. Perhaps this will be a good upgrade. A Naval sailor named Johnny Drake goes on shore leave and becomes entranced by a local beauty playing a mermaid in a sideshow. But then he begins to worry that she is the real deal and ready to seduce him into a watery death. I recall that the movie had the most realistic tarot card reading I’ve seen in a film. Maybe they can squeeze that in. (July 17-22, The Peter Jay Sharpe Theatre)

TEMPLE OF THE SOULS – In this pop musical about forbidden love, a beautiful Conquistador’s daughter named Amada and a young Taino Indian named Guario fall in love in the Puerto Rican rain forest, seeking refuge from their intolerant world in the magical Temple Of The Souls. Something about this premise just intrigues me. The late, award-winning Puerto Rican poet, journalist, and performer Anita Velez-Mitchell co-wrote the story and score. She was a living legend, and this show has been receiving acclaim and awards since it first emerged in 2011. (July 19-23, The Acorn Theatre at Theatre Row)

THE TIME MACHINE – The idea of turning H.G. Wells’ classic sci-fi novel into a Broadway musical sounds appalling, but in a more intimate NYMF setting I imagine it could actually click. (I’ve already got my tickets.) I’m curious how they will portray the Morlocks onstage. As a plus, star Randal Keith played Jean Valjean in Les Miserables on Broadway. (July 11-16, The Acorn Theatre at Theatre Row)

A WALL APART – A rock musical spanning 30 years of family, friendship, and love set against the imposing Berlin Wall, and featuring an original score by Graham Russell of Air Supply fame? My inner rocker cringes, yet it’s so crazy it just might work. As it turns out, this is Russell’s third musical production. The collective Broadway credits of the cast include Bright Star, A Gentleman’s Guide To Love and Murder, and Les Miserables, and actor Darren Ritchie, who played Johnathan Harker in Broadway’s Dracula, the Musical, won NYMF’s Outstanding Performance by an Actor Award for Standby The Musical in 2014. (July 25-30, The Acorn Theatre at Theatre Row) 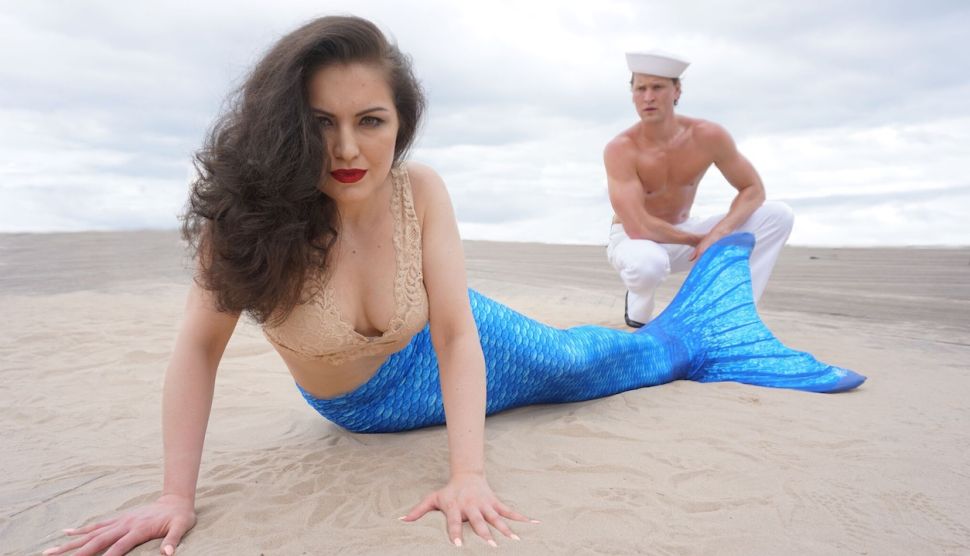