During the Cold War, to denote the irrationality of deterrence theory, nuclear strategy was given the nickname MAD—Mutually Assured Destruction—by its critics. As the 21st century began, an era of a different MAD arose. Today’s MAD stands for Mutually Assured Disruption—disruption caused by acts of man such as cyber hacking and terror and by nature with bizarre weather patterns and pandemics. The danger to the West, starting with September 11, was not annihilation by way of nuclear war but disruption to its way of life.

Another new acronym may be evolving: TRAP. TRAP defines the evolving relationship between and among President Donald Trump, Russia, America and President Vladimir Putin. The question is what type of trap this is and who will be trapped.

During the G20 meeting in Hamburg, Germany last week, the two presidents met not for the scripted 30 minutes but for more than two hours. Given translation times, the actual discussions lasted only about an hour. And no matter how long this meeting ran, even two hours is far from sufficient to scratch the surface of the differences between these two nations.

The collective meetings of both presidents and the G20 summit had certain oddities. At the Trump-Putin talks, in addition to two interpreters, only the foreign ministers attended: Sergey Lavrov and Rex Tillerson. Notably absent was the U.S. national security adviser, who is normally present at such meetings. Nor did the White House NSC senior officer for Russia, Fiona Hill, make the trip. And at the G20 summit, Ivanka Trump briefly substituted for her father at the meeting.

Both leaders’ reactions about the meeting were positive. Trump declared it “an honor” to meet with Putin, a statement that European and American press immediately attacked. Putin declared that a new era in relationships had begun, drawing rave reviews from audiences in Russia. Both decided to establish some type of a joint counter-cyber hacking center.

Trump raised allegations of Russian interference and hacking into U.S. elections. Putin denied these charges. Both sides agreed to disagree. After returning home, Trump called for an end to this controversy, saying it hindered the improvement of U.S.-Russia relations. This was not well received on either side of the aisle in Congress.

The leaders agreed to a temporary ceasefire in southwest Syria. How any ceasefire is to be achieved and survive is problematic. The interpretation was that Russia and America would focus on trying to resolve Ukraine and Syria as first steps to improving relations. To that end, the administration named former U.S. Ambassador to NATO Kurt Volker as special envoy to Ukraine with the charge to implement the Minsk II peace agreements—a huge task.

But it was perplexing why the presidents did not decide to hold a second summit to build on what was an encouraging start at least on a personal basis. Perhaps this was done secretly and explains why only four principals were present at the meeting. Of course, Republicans and Democrats in Congress are united on only one issue: Russia is an enemy. Hence, the president’s public maneuver room is very much circumscribed by hostile domestic attitudes towards Russia.

More discouraging, however, was that the summit members came out 19-1 against America on climate change. French President Emmanuel Macron saw America’s withdrawal from the Paris Climate Change Accord producing “a world (that) has never been so divided.” German Chancellor Angela Merkel labeled the withdrawal as “deplorable.” And it seemed that 19 of the G20 members regarded “America First” as a clear sign of Trump’s bend towards protectionism.

While this G20 meeting will be one of many, the implications at least initially suggest that America could be growing further from Europe and closer to Russia. Should that prognosis prove correct, Donald Trump will be abandoning 70 years of post-World War II stability and risks alienating long-standing allies in favor of a country viewed as an adversary.

The term TRAP then appears quite appropriate and quite worrying. Trump now has two overseas trips as his total experience in foreign affairs. Putin has nearly two decades in high office. As the Saudis played to Trump’s ego in Riyadh during the president’s first journey abroad, so too, it appears, has Putin.

Trump seems unusually amendable to such flattery. If that is an accurate assessment, it is clear on whom this TRAP may be sprung. And the paucity of American advisors who present at the meeting of the two presidents is a further sign of a potential trap. 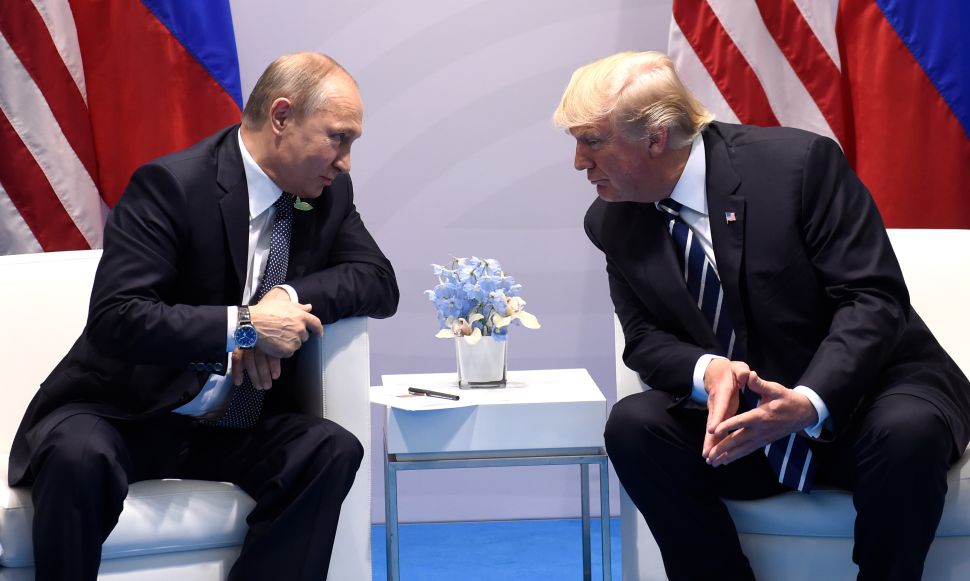