The world is gripped in fear, and day after day, we are reminded why. This ongoing project between Esri and PeaceTech Lab reveals that more than 400 reported terrorist attacks have occurred across the globe in 2017, with the estimated death count nearing 3,000.

Our fears are valid, and our desire to stem the tide of new terrorist recruits is necessary. However, our best shot at accomplishing this goal may not be found in our military’s ranks; it’s likely located within the private sector.

Propaganda under any name is the process of persuasion. Governments use it to win the hearts and minds of citizens, while businesses use it to generate demand. Though the battlefields are vastly different, business-to-business sales and radicalization share many similarities.

Business buyers do not wake up wanting to buy, and teens do not wake up radicalized. Both processes begin with target markets, take place over a long period, involve many influencers, are aided by salespeople, and reach across a variety of mediums. Despite this similarity, a stark contrast exists between how these two sectors approach persuading their audiences — one that stems from the outdated assumption that messaging is a viable method of persuasion.

In the bestselling business book “The Cluetrain Manifesto,” Doc Searls writes, “There is no demand for messages.” In a recent conversation with him on this topic, he further explained: “There never really was a demand for messages; there just wasn’t anything else.”

Now, consider that 7 billion people live on the planet, and 6 billion of them have cellphones. To put that in perspective, only 4.5 billion have adequate sanitation and just5.7 billion have electricity. Each phone is capable of creating, distributing, and consuming media and bypassing messages. The captives have been set free.

As a result of this infinite access to media, progressive businesses have completely shifted from traditional persuasion tactics to a content-fueled strategy on the basis of a new framework of individual engagement. This new approach is why the Islamic State is also successful. In an interview, social media and terrorism expert Nicole Matejic said, “They [ISIS] have taken the content marketing framework right from the best in class business tactics taught online and used it to sell jihad.”

This is why the efforts to stem radicalization are hitting a wall. We’re trying to fight a modern war with antiquated techniques. It’s like trying fight helicopters with horses, and we’re the ones on horseback.

It’s Time for a Change

Let’s analyze the route the U.S. government currently takes when combating radicalization. The following example sums up the approach.

In 2014, the U.S. Department of State’s Global Engagement Center, its think tank for new ideas to combat terrorism, launched a campaign called “Think Again, Turn Away,” with the aim of making radicals think twice before signing up. It consisted of a tongue-in-cheek YouTube video that showed dismembered bodies and exploding mosques in order to undermine the militant group’s recruiting tactics.

A 2016 Defense One article likened this message-driven approach to telling teens in the 1980s and early ’90s to “Just Say No” to drugs — and I can tell you from personal experience that it didn’t work back then. Now, two years later in the same article, Global Engagement Center Director Michael Lumpkin shared the following words about its most recent operations: “We have a wide range of partners. We have nation-states standing up messaging centers, working with the Global Engagement Center. We’re working with them to make sure that they have the technical skills to do effective messaging.”

The Islamic State is not relying on messaging for recruitment. The jihadi videos it posts are not how it attracts members but reinforce the flame it has already lit. In its recruitment manual, it even states, “In general, do not show the candidate any jihadi videos, audios, etc., except when his iman [faith] is at a high level, and when he is in a state of tranquility in order to have the best effect on him and on his heart.” We must not confuse the Islamic State’s large content network as simple messages effectively radicalizing pupils willy-nilly, but rather realize that ISIS has highly refined processes of identifying and nurturing targets, all aided by recruiters giving personal attention. This is a complex sale.

This complex narrative and highly refined system of radicalization cannot be thwarted by just better messaging or even by more content and alternative narratives. Our only hope is to look to the business world, which contains a highly refined process of persuasion in a very similar situation, and let those progressive ideas serve as our guiding light. This is the tack ISIS has taken, and we must as well.

How Progressive Businesses Are Leading the Way

Businesses have transitioned to a scalable process of direct individual engagement, powered by new technology and processes and geared for the infinite noise.

If these ideas, tools, and tactics were employed in the fight against radicalization, they would provide a scalable, measurable, and holistic process that could be easily deployed to any region in the world with minimal investment, solving some of the biggest problems of our current messaging-based framework.

One of the biggest roadblocks in the fight against radicalization is the sheer volume of alternative narratives we must combat. No solid number identifies how much media promotes radical causes, but we do know it is massive.

The private sector simply does not have the ability to take down alternative narratives. Instead, businesses are utilizing new marketing tactics to break through the noise. A great example is GE’s award-winning new content effort designed to recruit new talent. In an interview with AdExchanger, GE Chief Creative Officer Andy Goldberg said, “We want to reach tech influencers, young people, people interested in science, potential recruits to teach them what GE is all about, but the question was, how do we do it in a way where we’re not hammering them with advertising messages?” The result was a podcast that won multiple marketing awards and reached No.1 on iTunes.

Content marketing is helpful, but there is no denying the fight against terrorism requires a physical presence — a requirement no different from those for B2B sales. Large transactions require teams of salespeople and experts who aid the process and guide it to completion. ISIS has recruiters, and we have boots on the ground. Ensuring these highly skilled assets are deployed with precision is paramount to the overall success of both business and governmental campaigns.

After learning about GE’s podcast “The Message,” I discussed GE’s approach with Carlos Hidalgo, the author of “Driving Demand” and former CEO of top B2B marketing firm ANNUITAS. Hidalgo believes, “It’s not just their content, but also a new set of tools which are allowing GE to be so successful with efforts such as ‘The Message.’ New tools such as marketing automation and lead tracking are allowing GE to direct its salespeople to the most sales-ready prospects, ensuring optimal use of human capital at each and every moment.

“For example, if a prospect listens to the podcast, then goes to GE’s website to look at sales-ready content, the technology would notify the correct salesperson and provide him or her with a full dossier of context that facilitates a fruitful conversation. It’s the combination of content and timely interaction which is allowing GE to succeed where others are failing.”

Hidalgo says, “This combination of technology and content isn’t a nice-to-have; businesses can’t compete without it.”

These modern tools and tactics are some of the most effective for driving business results in the modern era — and they could easily be replicated by our defense forces. However, the benefits mentioned above are only the tip of the iceberg; the private sector is also using marketing technology to measure propaganda — something not possible with traditional messaging methodologies.

Our government’s traditional, message-based propaganda provides highly subjective results. It is typically measured via actions, not outcomes. For example, it’s easy to report that we posted 10,000 flyers, arrested 500 people, or deployed 2,000 troops to a village — but tracking the outcomes of these efforts over time has always been very difficult. A recent Washington Post article quoted a government official who, when asked how his team measures the success of its propaganda campaigns, responded: “That is the billion-dollar question.”

Businesses used to have this problem, but marketing technology — such as marketing automation and lead tracking — has since solved it. These tools can track consumer behavior and tie specific actions and outcomes to specific marketing activities. This not only solves the issue of effectiveness, but also uncovers new ways to engage an audience. As Robert Holmes, VP of sales and marketing at Stanley Black & Decker subsidiary Mac Tools, phrased it to me: “Once you understand your customers’ behavior and purchasing patterns, you can make smarter decisions and really help get them the things that they need.”

The benefits are clear, but the most important — and potentially most effective — perk of this new approach to propaganda is its holistic abilities. A report published in 2016 by civil-military think-do tank Info Ops HQ on Australian foreign fighters found that only 2 percent of terrorists are self-radicalized; the majority of radicals are influenced by their communities or nuclear families first. That means persuasion of an individual must also include persuasion of his or her influencing group.

This same scenario is true in business. Decisions are not always made by just one person; they’re often made by groups of five to seven people. However, each individual in the group plays a unique role in influencing the final decision. The same marketing technology leveraged by GE, Stanley Black & Decker, and thousands of others can identify each person’s role and guide him or her through a personalized journey, providing a scalable and holistic system of persuasion. Rather than one message for everyone, it is a highly refined and scalable system of mass persuasion via individual paths.

We must understand how similar citizens and customers have become in the modern era. Our efforts to fight radicalization via messaging worked at one time, yet as the private sector has shown us, that time has passed.

The future of propaganda can be found in today’s most innovative businesses. If we let them guide the way, we have a very real chance of shifting the tides of radicalization by creating a scalable, holistic, and efficient process of persuasion built to work in our new media environment.

The private sector has found a better way, not out of novelty but out of necessity, and it’s time we begin to see the possibilities of a progressive new approach to winning hearts and minds.

Mathew Sweezey is principal of marketing insights for Salesforce. Mathew’s work has appeared in Mashable, VentureBeat, CMO.com, Forbes, and Huffington Post. Mathew is a frequent speaker at conferences around the world and routinely works with the world’s largest and most respected brands, including NATO, MIT, UPS, The Home Depot, NASCAR, Verizon, and Dell. Mathew is the author of Marketing Automation for Dummies. His next book, Context, is being published by Harvard Business Press and is set to hit stores by spring 2018. 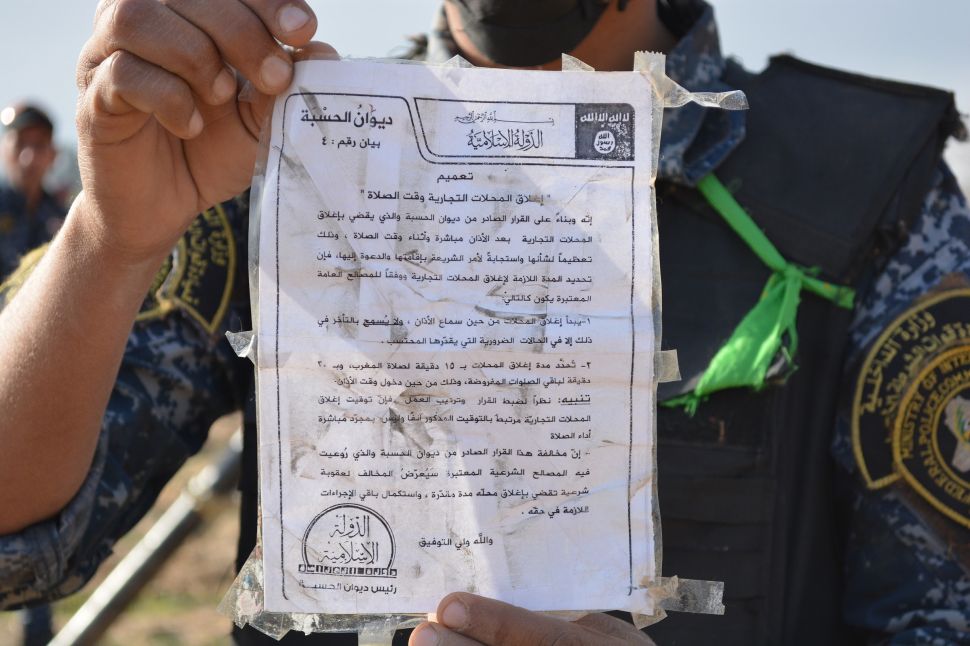