When you think of great sports films, you think of ones like Field of Dreams, a movie that goes beyond baseball and takes you into a magical world. You also may think of A League of Their Own, which destroyed gender stereotypes. Unfortunately, there are also sports films like Rocky and The Blind Side that unintentionally belong in the horror film category. How did these films ever end up as Academy Award winners?

Bias alert: The popular foxy girl that lived on my block during my elementary school years would hold Sylvester Stallone birthday parties outdoors into the late hours of the night every year since Rocky came out, and it didn’t seem to matter that my young body needed to sleep. Then, there were my teenage years. My best friend, who would one day be revealed as a member of the LGBT community, was relentless in his fandom for Sylvester Stallone to the point he would want to beat me up for not liking Rocky IV. He had Stallone and Rocky memorabilia all over his bedroom, bathroom and locker. Personally, I thought Carl Weathers, who played Apollo Creed, was a better actor. He was also better looking, but I never made my thoughts about that known during the sexually repressive 1980s.

Still, it’s not hard to see that Rocky has not aged well. The story of the Philadelphia underdog from the streets who rises to become a top boxing superstar is written with one cliché after another and contains dialogue that is so canned that sentences seem chosen by randomly selecting words from a hat. Then, there is Sylvester Stallone, who has always made a great celebrity—but not a great actor.

And despite its major flaws, Rocky does shine at moments. As bad of an actor as Sylvester Stallone is, he develops certain moments that hit the audience in their hearts. Despite his mediocre acting talent, Stallone’s performance improves as the movie goes on. But what really saves the film from being a Golden Raspberry Award contender is the twist in the ending, where Rocky doesn’t win the final fight but still “goes the distance.”

It’s unfortunate that the small amount of shine doesn’t spread to the other Rocky sequels, which were made specifically for cash without the thought of any memorable plotlines or character development. The writers especially neglected the character of Mickey, Rocky’s trainer, to the point that when he died of a heart attack in Rocky III, I, a miniature film critic, cheered. I tried to explain after the film that I wasn’t mocking someone dying of a heart attack; I was cheering that the inept Rocky screenplay writers couldn’t ruin Mickey’s character any more than they already had.

I would come to realize that screenplays for sports movies don’t need to be good to sell; they just needed to follow a “feel-good” formula. And that’s exactly what happened with The Blind Side in 2009. A rich white lady adopts a poor but promising black football player, smothers him, and helps push him into the big leagues. It sounds good on the surface, but The Blind Side becomes a typical white savior film in which Michael Oher (Quinton Aaron) could only succeed through the intervention of Leigh Anne Tuohy (Sandra Bullock), who basically treats Oher like some type of exotic pet.

Look, the idea that rich white people helping out poor black people is self-serving and leads to cultural appropriation is not only preposterous; it’s extremely divisive. But after watching The Blind Side, you may be able to see why some racial arsonists come to that conclusion. Though The Blind Side is based on a true story, its presentation is flawed.

That’s not to say that The Blind Side has bad intentions, and some of the scenes are really important. The scene where Leigh Anne confronts her lunch friends about their racism regarding her newly adopted son—which ends with the words “Shame on you”—is uncomfortable but powerful. The bonding scenes between Leigh Anne’s son S.J. (Jae Head) and Oher are powerful as well. The rest of the movie tries to be meaningful but falls flat.

The scene where Leigh Anne gets called a “bitch” by a gang banger acquaintance of Michael’s, walks back up to him like a tough white lady, and says, “No, you listen to me bitch. You threaten my son, you threaten me,” is one of the must unintentionally funny scenes in a recent movie, especially since the audience is supposed to believe that the group of gangsters were actually intimidated as Leigh Anne walks away and brags about her gun. In the real world, there is no way she would make it back to her car alive.

As racial tensions have risen during the past decade, many white entertainers and filmmakers (unfairly, in most cases) have been raked over the coals for any perceived notion of “privilege” in their work. There is no way The Blind Side would survive these days without an intense backlash, especially given that the SJW community spends hours a day finding movies to be offended about. However, this time a decent portion of the backlash was deserved.

Many would say the fact that The Blind Side and Rocky earned multiple awards, including Oscars, proves their worthiness. Rocky, especially, is a part of pop culture history. But achieving pop culture status means—in many situations—that the marketing people behind the project should be praised instead of the project itself. Both Rocky and The Blind Side have prove how gullible the movie-going public can be. 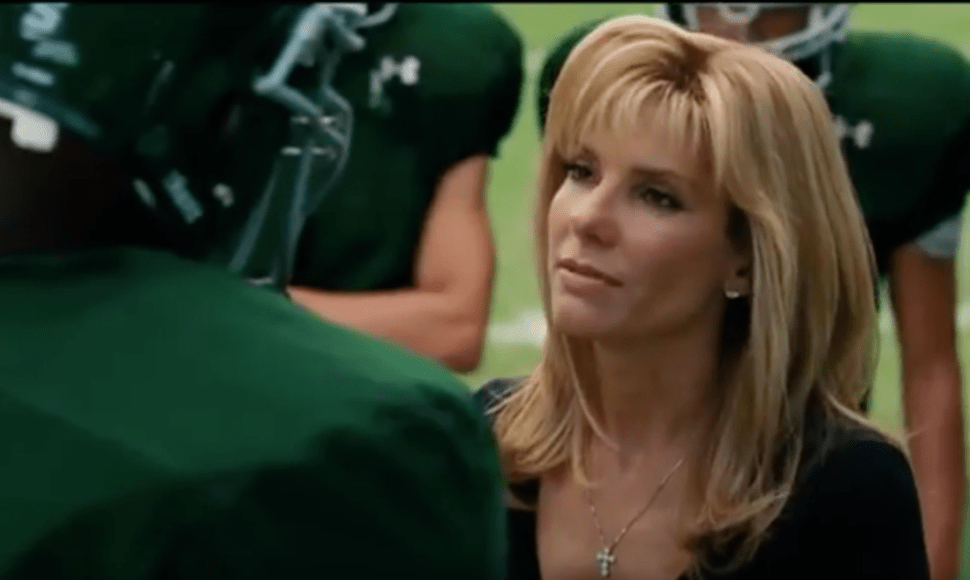