Seattle’s CenturyLink Field drew a somewhat different crowd than the usual Seahawks fan-base this past weekend. From Thursday through Sunday the sporting venue played host to the third annual Seattle Art Fair, where international collectors and art enthusiasts perused the offerings of 100 galleries from ten different countries, listened to musical performances and sipped champagne.

Outside the field, the only indication that a major cultural event was happening next door was an elegant sculpture by Jessica Jackson Hutchins. In the work, a decommissioned bus station stands on a plinth, its windows and ceiling replaced by colorful stained glass. A thin green hammock hangs in the middle like a smile. The entire structure gazes at the stairs leading up to the 72,000-person stadium, a relative Goliath. Built with a $360 million budget, much from local Microsoft billionaire Paul Allen, the stadium is simultaneously a mass entertainment center—where the Seahawks play and Metallica will perform this weekend—and a symbol of the city’s wealth. A single piece of art, and the individual who created it, can seem very small in comparison.

Same goes at an art fair. At an event designed to connect dealers and collectors, artists often have little place. As other major art fairs have done in an attempt to add a less commercial, more creative element to the festivities, the Seattle Art Fair (which Allen himself founded) has employed a curator to organize public programming. For the past two years, Los Angeles-based Laura Fried has acted as its Artistic Director.

“I’m all for projects that exist in the interstitial spaces of an art fair,” Fried told me in the VIP lounge. “I think it mediates your experience in a meaningful way. I know that I have that experience at an art fair, seeing thousands of objects.”

Indeed, it was difficult to walk around the fair without encountering one of seven projects situated at the fair’s intersections. Naama Tsabar’s piece, Closer, was a particular audience favorite. Five times throughout the weekend, the musician who goes by the moniker Fielded interacted with Tsabar’s sculpture, a tall white wood and metal box that contained microphones and guitar strings. Fielded reached into the box to play the internal instrument, singing into the embedded microphone. Guests were treated to mini concerts, and Fielded’s haunting voice reverberated throughout the aisles.

Fried also focused on bringing West Coast voices to the fair. She says she wanted to “bridge what’s happening [in Seattle] and what I’ve experienced down the coast.” Lesperance and Hutchins are both based in Portland, while Mira and Vogt hail from Los Angeles. Brennan Gerard and Ryan Kelly, who premiered their gorgeous, provocative film Modern Living, spend half their time in Los Angeles, and their work features performances by L.A. Dance Project. Artist Mary Ann Peters represented Seattle with a large-scale sculpture. On Saturday, artists Oscar Tuazon and Jennifer West spoke about their work in the fair’s adjunct theater. The former grew up in Seattle, while the latter spent years in the city as a teenager. Both now, however, live in Los Angeles.

If Fried did her part to support local artists and enliven the Seattle’s cultural scene—beyond art sales—the city’s gallerists attempted to attract interest and engagement from the rapidly expanding tech community. According to John Braseth of Seattle’s oldest major fine art gallery, Woodside / Braseth, it’s a long process. He explains, “It’s a question of building relationships…you have to educate first.” Even if someone makes stock options, “it doesn’t mean they’re going to do anything but buy a Tesla.” Braseth describes how these companies’ internal art programs are also helping spur interest in culture.

Over at the booth for Laguna Beach-based Peter Blake Gallery, Blake revealed that he hadn’t sold anything at the fair as of Saturday afternoon. His booth was filled with minimal works by members of the Light and Space movement—a thoroughly West Coast enterprise. Nevertheless, he told me he’d return next year. He’d found the fairgoers friendly and open-minded. As an outsider, he assessed that the city, in particular its community of recent Bay Area transplants, was hungry for culture and reluctant to fall behind San Francisco. While we were speaking a man in pink shorts with a Frieze Art Fair tote joined the conversation. He revealed that, indeed, he’d recently moved to the city from California to work for Microsoft. Behind us, an ethereal painting by Mary Corse shimmered.

Paul Becker, Founder and CEO of art buying platform Art Money believes that the tech set may yet find an even deeper connection to the art world. “I think people who are into tech are essentially creatively interested people,” he said outside his booth at the fair. “It’s about discovery, it’s about doing things better, it’s about creative thinking and innovative thinking and I think contemporary art brings all of that. So I think there’s a really natural synergy.”

Whether all this supports art-making and opportunity for the city’s creative practitioners remains to be seen. But for one weekend, a center built by a tech fortune drew in the Seattle community—from long-time collectors to the young, tattooed masses. The fair was a welcome and unpretentious respite from its counterparts in New York, boding well for future connection between the city’s contrasting factions. 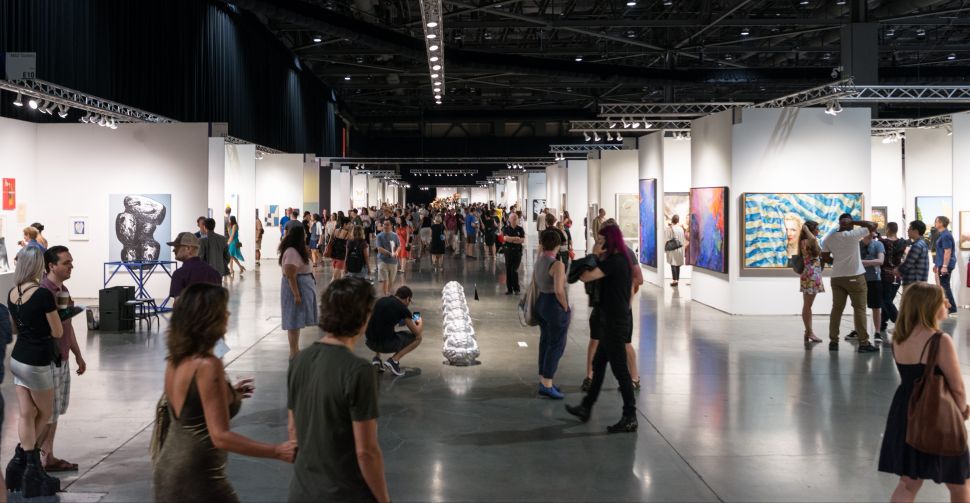