So you’re going to be traveling to Venice for the city’s 74th annual Film Festival? Lucky you! While the week will be filled with screenings for this year’s hotly anticipated film projects, plus events hosted for and attended by a veritable who’s who from Hollywood, you’d be remiss not to take some time to immerse yourself in the city’s other cultural offerings. Here are some can’t-miss art museums and shows to add to your itinerary.

Coinciding with the Film Festival is one of the art world’s most prestigious international exhibitions: the Venice Biennale. Every two years, countries from around the world (this year the tally is 85) flock to the floating city, activating it with performances, installations and pavilions showcasing their leading artists. German artist Anne Imhof’s stirring performance work Faust—which features dancers under a glass stage and live dogs—has earned her the exhibition’s top honor, and is not to be missed. Other shows are split between the pavilions at the Giardini and the main exhibition at the Arsenale.

The city’s premiere modern and contemporary art museum is located on the Grand Canal inside an unfinished, palatial 18th century estate, and holds the renowned collections of art collector Peggy Guggenheim—of the same Guggenheim family behind New York’s iconic museum. Peggy’s collections feature masterworks on permanent view by Brancusi, Picasso, Duchamp, Mondrian and many more, as well as rotating exhibitions featuring works on loan from other institutions and from the Guggenheim Foundation. The sculpture garden, which boasts pieces by Giacometti and Andy Goldsworthy, among others, is a peaceful oasis and the perfect spot to catch your breath between Festival events during the busy week.

Prominent art collector and Christie’s owner Francois Pinault has not one, but two contemporary art spaces in the city: The Punta della Dogana and Palazzo Grassi. In conjunction with the Biennale, Pinault is hosting the first major exhibition by YBA bad boy artist Damien Hirst in 13 years, and the works must be seen to be believed—we mean that quite literally. The premise of the show is: 190 “ancient” artworks rescued from a sunken ship that run the gamut from sphinx statues to colossal monsters, with a few that suspiciously resemble the artist himself. Love or loath the artist’s over-the-top oeuvre, and critic’s have been mostly leaning toward the latter when it comes to this latest body of work, it’s worth seeing Hirst’s monumental creations before deciding for yourself.

Douglas Gordon at the Doge’s Palace

The Doge’s Palace is a wonder by itself—a 14th century building that was once the center of the city’s political power—but is currently hosting the world premiere of Scottish artist Douglas Gordon’s film installation, titled Gente di Palermo! (Citizens of Palermo), inside its former prison wing. The film was shot in an underground cemetery in Palermo and focuses on the contrast between the catacombs’ population of mummies and a seemingly random and discarded floating balloon which the artist found while filming.

Inside another historic building, the Museo Correr, Iranian artist Shirin Neshat is showing photographs from her 2015 series The Home of My Eyes, a series of 55 portraits depicting people from Iran’s northern neighbor Azerbaijan. The images are adorned with delicate calligraphy in ink, a signature trademark of the artist’s. Also on view is a new film Roja (2016), which examines an Iranian woman living in the U.S. and her feelings toward her nation of origin. The film is based on the Neshat’s own experiences as an immigrant. 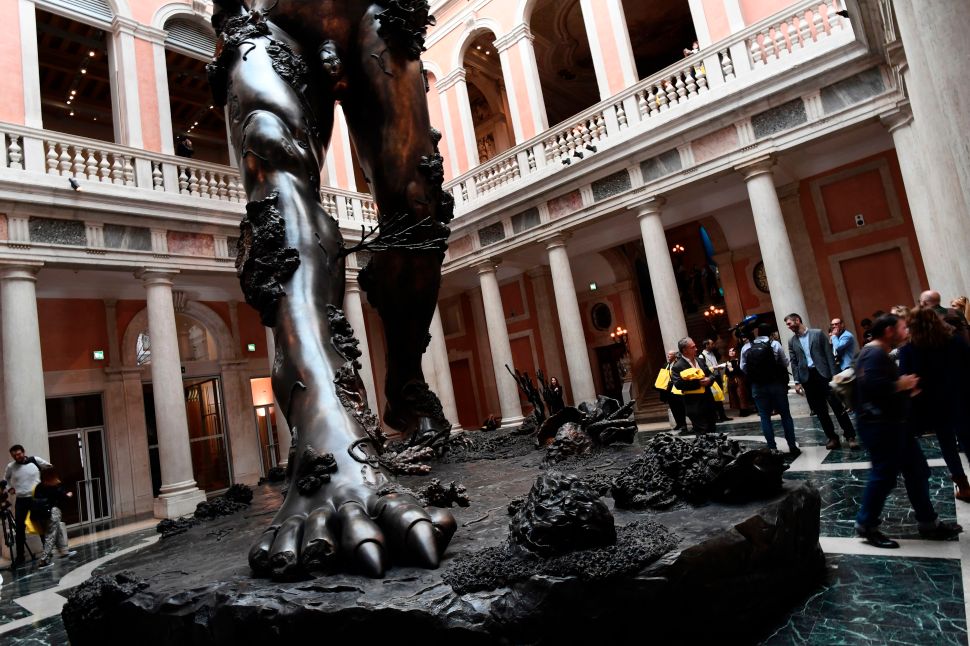