Knock, knock. You’ll never guess who’s there. Then, again—given it’s A Doll’s House, Part 2—you will: Henrik Ibsen’s Nora has returned to the scene of her crime against domestic life and family values (circa 1879, when she left a doting, adoring spouse and their two small children to find her own voice in the world—outside marriage).

Hers was the slam heard ‘round the world—but now here she is again, hammering away at the same door she so famously and emphatically shut. The knocks, coming in a wave of three, grow progressively more insistent—from four to seven to a dozen.

Of course, stars don’t bother to knock. Laurie Metcalf didn’t and won a Tony as Nora; nor does the new Nora, the already Tony-winning Julie White. That task is left to a manly stage manager so the ladies can conserve their energy for the 89-minute main event.

The first matinee after the Tonys, White hightailed it to the Golden, fearing the play might soon fade. Not only didn’t it close; it’s the one Best Play nominee still standing, and it will stand until January 7, according to the extension notice posted at the theater.

“As I watched the show,” the actress recalls, “I kept thinking two things, a.) ‘Oh, my God! I have to play this part some day.’ And b.) ‘How in the world is Laurie going to do this till January 7?’ It looked so hard, but I was, like, ‘Dang! I could murder this part if I got a shot at it.’ The next day, they offered it to me. I’m not kidding. The. Next. Day.”

Before she knew it, she was leading an almost complete changing-of-the-guard at the Golden. Stephen McKinley Henderson, a member in good standing of The August Wilson Stock Company (Jitney, Fences) and an Obie winner in his own right (Between Riverside and Crazy), replaced Chris Cooper as Torvald, the husband that Nora left behind, and Erin Wilhelmi, fresh from Ivo van Hove’s teenage-witch coven in The Crucible, took over for Condola Rashad as their now-grown daughter. Jayne Houdyshell, a pillar of the previous production, stayed in place as the family maid.

Not a few of the re-reviewers thought the new mix of players practically made a new play—certainly, a different one—and recommended a repeat viewing. “A second visit to A Doll’s House, Part 2,” wrote Michael Glitz in the Huffington Post, “confirms this is a major play that can and will be staged again and again, finding new insights with new cast members and new approaches to the material. Anyone who saw the original cast should jump at the chance to see it again and appreciate how this version plays a little more seriously…yet still with plenty of laughs.”

Unchanged is the play itself—by Lucas Hnath, a Pulitzer finalist for The Christians—and the adventurous, pedal-to-the-metal direction of Sam Gold. The only new element is the cast chemistry, which boils and bubbles at a different temperature.

“Everybody has a different paint box,” White says. “Stephen and Erin and I are doing the same work as the original cast. We’re just using different colors to do it.

“I will say, directorially, what Sam and company found in their first incarnation of this thing is that it has to have a pace. You don’t have to explain things to people,” she adds. “The audience can’t get ahead of you. You want to keep them in this breathless pace. It’s not chess. It’s tennis. It’s a fly-through. It’s running to make the next point, getting it back across the net. You’re not just sitting, thinking about where’d your pawn go.”

The actress is more than happy to go with this frenetic flow. “It’s really nice because you don’t have to feel like everything has to be put out there vocally. Some stuff I throw away. Nora gets the idea for the next thing she is going to say while she’s finishing something else. That’s fun and funny to see somebody thinking that way.”

At one point in the play, when the heated exchanges get too much for her, she calmly walks over to a wall and bangs her head against it. Just once, but sharply. It’s a typical Julie White moment—something only she would do or, for that matter, would dare to do.

White was pleased to see Nora had come home a wealthy and successful woman, and, since glamour roles rarely come her way, she was quick to take advantage of it.

“I was amazed to discover, at my first costume fitting, just how fancy-pants her outfit was,” she admits. “There’s a lot of it. There’s this peacock-blue gown with a big petticoat that has all this intricate work. It’s designed by David Zinn and built by the man who’s building all the Frozen costumes. I was, like, ‘Wow! This is very feminine.’

“I started thinking about the novelist Tom Wolfe—how he’s always in his white linen suite and dressed to the nines—and I decided Nora is a little bit of a dandy, too. I wanted to make her a strutter, something of a clothes horse. It’s a great way into a character, and, for me, that’s kind of Nora, throwing her skirts around, sweeping about. Laurie did a physicality that was quite different from all of that.”

In her 15 years away from her dollhouse home, unpampered and unprotected by the master of the manse, Nora has become a feminist firebrand. She did this simply by writing up—under a pseudonym—her own sprint to freedom and encouraging her gender to do likewise. A judge, who lost his wife to Nora’s indoctrination, learns that Torvald, in his passive-aggressive fashion, never divorced her, which makes Nora eligible for jail time, as she’s signed contracts without her husband’s permission.

A Doll’s House, Part 2 started out as a joke—something Hnath would say to make jaws drop when the annoying question of what he was working on would come up.

The comedy inherent in that arrogant, audacious response comes through loud and clear in his follow-through on the title. He keeps Ibsen’s characters in traditional 19th century attire, but the colloquialisms coming out of their mouths are decidedly 21st century. There are many instances of “O.K.” and (courtesy of Anne Marie, the housekeeper Nora left holding the child-rearing bag) even a few times an “eff-you.” Whereas Ibsen’s ground-shaking door slam scored a stunning victory for gender equality, Hnath’s sequel shows how others got damaged by her showboating exit.

White comes to Nora mostly from comic characters—Nadine Swoboda on TV’s Grace Under Fire, Judy Witwicky in the Transformers film franchise and her Tony winner, the brassy agent who wisecracked in Eve Arden italics in The Little Dog Laughed—but that blend of humor and humanity she brings to Nora is what brought her back to New York theater: In Dinner With Friends, Donald Margulies’ 2000 Pulitzer Prize–winning play about how a couple’s divorce impacts on their friends, she was the odd wife out, depressed and weepy until the play flashed back to her first spark of love.

“Nora is a great role in the way that I get to play her,” she says. “It’s a fantastic, post-modern take. I’m Nora Helmer through the lens of Lucas Hnath. His vision of her has pieces of his mother and other women in his life. He fully imagines her whole world.

“I’ve gotten to have Lucas around a few times to really pick his brain. One thing he said to me—and I really try to play it in that moment when I’m cornered—is ‘Nora thinks she’s climbed to the top of the mountain, but, during the course of the play, she gradually realizes, ‘Oh, I really only got to base camp.’ She’s got so far to go.”

Following Laurie Metcalf with Julie White is the sort of astute casting you would expect from producer Scott Rubin (“I’ve always wanted us to play sisters,” White asides). Both are direct, plain-speaking women with no aversion to blunt remarks.

Which makes them battle-ready for the series of one-on-one sparrings Hnath puts Nora through. Metcalf was more tightly wound and had a harder edge. Her Nora’s survival was never in doubt. White’s is. She has a lighter, more vulnerable touch, so her head-butting with Henderson comes across as a more even match. “Stephen is a very emotionally accessible actor, which I love and appreciate. I feel a certain history with him. When I hold his hand at the end, it does seem very familiar.”

Nor is Wilhelmi the warrior-daughter that Rashad was. This, too, is a fairer fight. She and White bonded right off the bat for a surprising reason: “Erin looks so much like my own daughter, Alexandra, it’s freaky. Alexandra’s getting married next Mother’s Day and bringing her fiancé to see the play. He’s never seen me on stage at all, and the first thing he’ll hear me say is, ‘Marriage is cruel, and it destroys women’s lives.’ ”

She lets out a raucous cackle, just thinking what a first impression that will make! 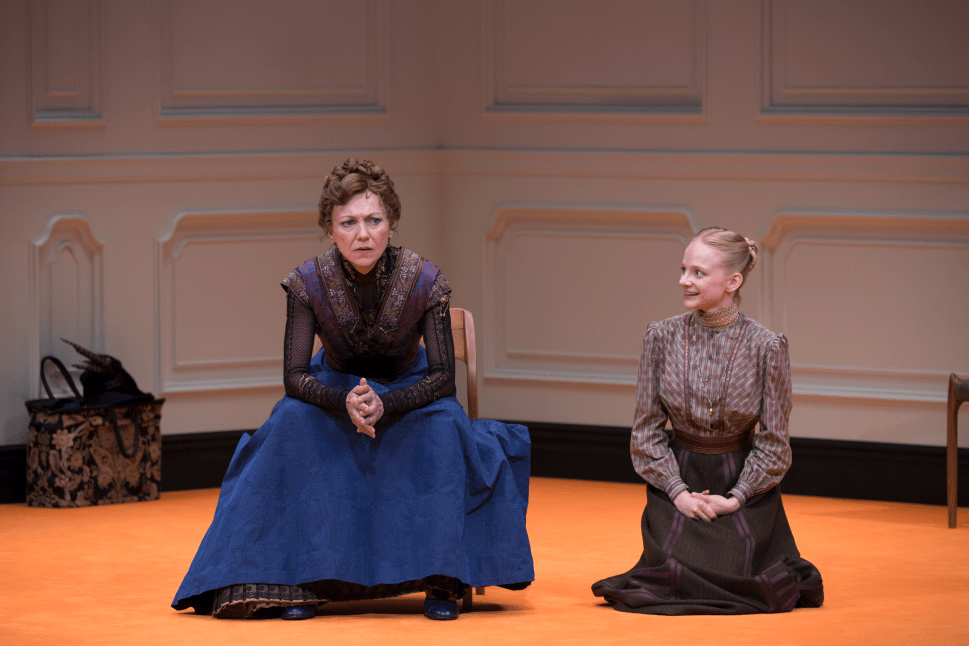