Analog Gems is a column highlighting movies and TV series that have not been released on DVD, Blu-ray or been out of print for too long.

The horror movie landscape is littered with films crying out for HD release, and one in particular that is truly deserving is the creepy Old West anthology Grim Prairie Tales. Written and directed by Wayne Coe, who had previous experience as a poster illustrator for movies like Out Of Africa and Back To The Future, the quirky pentalogy subverted Western movie themes in search of something different.

The conceit here is that city clerk Farley Deeds (Brad Dourif), who is making his way by horseback to Florida to see his wife and her ill mother, is joined at his prairie campfire by bounty hunter Morrison (James Earl Jones), who is transporting a scalped corpse on his horse. After his initial trepidation wanes, Farley engages in a sinister story swap session with his cantankerous visitor. The eerie narratives include a tale of a callous cowboy who disrespectfully passes through an Indian graveyard, a young traveler who seeks to aid a pregnant woman roaming the plains, a settler family whose patriarch harbors a dark secret, and a gunslinger who takes part in a gruesome showdown that haunts him long afterwards. The fifth story, of course, is the Deeds-Morrison summit.

The washed out copy uploaded onto YouTube does not include the introductory subtitle that was placed on the Academy Entertainment VHS release from 1990: “Hit The Trail…To Terror.” The film is understated in its fear factor, but at the time the video company released it, they were trying to place and promote it in one of the few categories in Blockbuster Video. So they skewed it towards horror.

“That was the marketing campaign, and it was very smart,” acknowledges Coe when he speaks to me. “When we released it, we didn’t have a great tagline.  But it turns out the market was college educated women. That makes perfect sense to me in retrospect.” He recalls how Dourif sat him down and said, “You know this is a feminist Western.” Indeed, many of the female characters hold the power while misogynist or racist men get their comeuppance. “I had these attractive young women coming up to me after screenings going, ‘I really loved your film.’ I thought, ‘Wow, what a singular audience for a horror-Western anthology,’” Coe said.

While the film does not directly invoke the genocide of Native Americans or the stereotypical cowboys versus Indians trope, it does “in a playful narrative manner, address cultural insensitivity, sexual repression, racism, violence as social transformer, and sexism,” notes Coe. “These themes are on the mind of any conscientious American. They are equally on the minds on the negative side of every wealthy, militarized American colonialist who’ve defined the western [genre].”

Coe, a California native who spent ten years living in Oklahoma during his youth, wrote a treatment for the film in 1984, which he titled Weird Two-Fisted Western. Self-taught, his seminal filmmaking experience was a project he made with high school friends in 1979 called PutnamCityMan, a 25-minute black and white Superman parody shot on 16mm film with a Bolex camera. “It was incredible,” he recalls. “We never should have been able to make it. It was remarkably good. It had all these effects that you could do in camera.”

Having made “obscene amounts of money” as an illustrator for Universal, and continuing to thrive on his own in the mid-1980s, he anticipated making Grim Prairie Tales by shooting one sequence per year for five years with his own funds. He would get it done regardless of the ultimate interest in the project. But by 1988 he and a producer and secured funding. During the writers’ strike of that year, he spent three weeks shooting the four standalone stories in various locations near Los Angeles, including in the Mojave Desert and at Bob Hope’s ranch. The film attracted a talented cast, like Marc McClure (Superman), William Atherton (Die Hard), and Michelle Joyner (Cliffhanger). In May 1989 Coe shot the essential interlacing sequences with James Earl Jones and Brad Dourif on a farm near the desert that they rented for $1,000 per day.

Despite being a small film by a first-time director, Grim Prairie Tales landed the two leads who drove the film with their fun banter. Coe recalls that at the time Jones was worth around $300,000 per feature, although this role required far less screen time than usual. “I think what was offered was $25,000 cash and $25,000 ownership in the film,” says the director. “He happened to be available.” At a meeting with Jones at his home, the famed thespian told Coe that his twisted tales reminded him of James Beckwourth, a mid-19th century author and “prevaricator of tall Western tales.” Jones liked the script and the footage they showed him, so he signed on.

When Coe met Dourif, the actor “drove up in a motorcycle all dressed in leather with suitably long, hippy hair,” he says. After securing Dourif, Coe sat down with him to go over every beat in every scene because his co-star was a Method actor. Jones was evidently the opposite. “James can turn it on. He just needs to know what emotion he is supposed to be dialing in.”

Jones and Dourif no doubt were enticed by Coe’s “anti-Western” in which he shirked supernatural monster terror for more down-to-earth ideas. Coe was adamant in eschewing the familiar trope of “the xenophobic white man who rescue the woman who is threatened by the sexually deviant savage.” He wanted to invert those ideas. In doing so, he “unintentionally wrote a soft horror film that reaffirmed the power of women, which is completely cockeyed,” he said. “It’s the opposite of the way Academy Entertainment marketed it, but they moved 40,000 video units, which was the most that they moved that year of any video. It was their hit.” According to Coe, it later became TV Guide’s pick of the week and ran for years on cable.

One memorable sequence in the film came during the gunslinger story. It is an animated nightmare in which the killer imagines his screaming, miniaturized bullet-head loaded into the barrel of a gun and fired. When Coe asked for bids from animators for the surreal sequence, they ranged from $200,000 to $1.1 million. “I had it storyboarded,” explains Coe. “The entire budget for the film was $550,000, so we knew that wasn’t going to happen.” Production designer Anthony Zierhut suggested they just animate it themselves, which they did in three weeks for $2,500 during the nine-month post-production period.

Grim Prairie Tales sold well on videotape after being self-distributed theatrically by East West Film Partners. Coe wrote a prequel called Grim Prairie Tales: Rescue Party in which Jones’ character Morrison sought to rescue his kidnapped grandchild from his murderous son-in-law, Raymer. (Raymer was the corpse in the film.) That second installment never materialized. After Grim Prairie Tales came out, Coe did numerous commercial animations and started shooting music videos and sketch comedy. He worked on several screenplays throughout the 1990s and launched into a successful painting career in 2000.

Coe’s newest film project shifts from supernatural creepiness to very personal horror of a different sort. He is currently editing a documentary called We Have Your Kids, which was inspired by a political power struggle in the school system of Chatham, New York, where he resides with his wife and three children. One day, the school board “suddenly announced that they were considering closing the middle school I look out my front door at,” recalls Coe, who adds that it is a national award-winning school with numerous honor students.

As he investigated further through school board meetings and research, he learned that if the school closed, 350 students, including his kids, would be shuttled off to a school in a valley near where trains carrying explosives and incendiary materials frequently traveled through. The community was outraged, and yet the board voted 8 to 1 to close the school. Coe took it up as his cause. The director has a four-hour rough cut of We Have Your Kids that has cost $250,000 thus far. “Everyone who sees the trailer and 15-minute clip thinks it is a really important subject,” remarks Coe. He admits he is not an activist but just seeks to do what is right for the children.

As we wait for that film to emerge, we hope that Grim Prairie Tales can receive the Blu-ray release it deserves with a widescreen video disc that allows us to fully appreciate the movie’s panoramic landscapes and dark imagery. By the way, this was the feature film debut of future two-time Academy Award winning cinematographer Janusz Kaminski, who later shot Saving Private Ryan, War Of The Worlds, War Horse, and the forthcoming Ready Player One.

Being an indie film, Grim Prairie Tales left no discernible financial trail, unlike a larger studio picture, and Coe admits that he was not deeply involved on that side and has not been affiliated with the picture since 1991. “The video license lasts for 20 years, and as soon as it ended in 2010 I saw DVDs,” he says. Unfortunately, they were bootleg dubs from VHS. It appears that a laserdisc came out around the time of the anthology’s original release, but copies are scarce.

The director and producer had a falling out after the film came out, and Coe does not own any of the original film elements. “I can’t speak to it,” he says. “I’m not the rights holder. The producer did not leave me on good terms.” Wayne says he was contracted to receive three prints of the film and a video master (for personal use only) that he never received. But he does not believe there are any legal complications or copyright snaggles holding up a re-release. It’s likely just about securing a good financial deal. 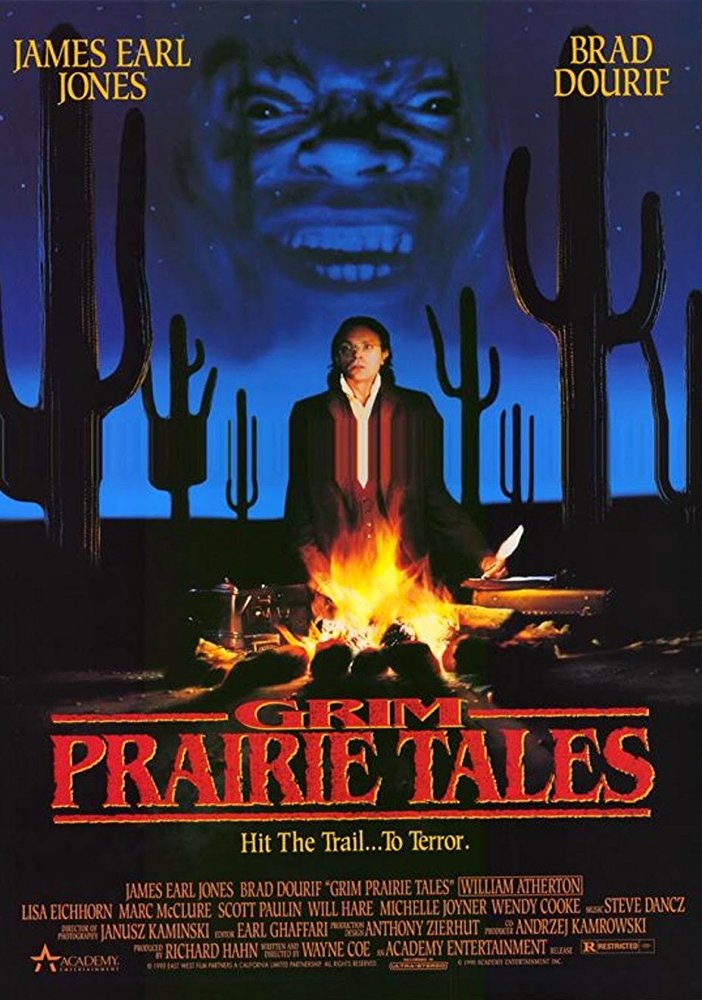