Two Asian lawmakers representing large Korean communities in Queens are calling on President Trump to put an end to the “ad libbing” on Twitter and focus on diplomatic channels and peaceful measures to resolve the ongoing conflict with the North Korean government.

Trump warned North Korea on Tuesday that if it makes any more threats against the United States, such an action “will be met with fire and fury like the world has never seen,” saying that North Korean leader Kim Jong Un “has been very threatening.” North Korea outlined its threats more specifically, with state media indicating later Tuesday that it is “carefully examining” a proposal to strike Guam, a U.S. Pacific territory, with missiles.

Today, Trump suggested that his assertion “wasn’t tough enough” and said “we’ll see” when asked what would constitute a tough response.

Queens Congresswoman and Democratic National Committee Vice Chairwoman Grace Meng, who is Taiwanese, said that her constituents are “horrified” by Trump’s behavior.

“Well locally, our constituents are horrified,” Meng told Observer following the press conference at Flushing Town Hall in downtown Flushing this afternoon. “This not a topic nor a time for the president of the United States to be ad libbing. This is a time when he should consult his military experts and not just say things on Twitter or off the cuff. He arguably drew a red line and was almost daring North Korea to cross it and that’s just not responsible rhetoric or actions.”

She said that “definitely” wants to see a diplomatic solution and urged him to “consult and listen to his military experts.”

And she said that the lawmakers on the appropriate committees “are talking in a  bipartisan way” about next steps.

“I think that the White House, his experts are trying to do their part in making sure he’s not just tweeting or saying things off the cuff. If there is any sort of declaration of war, that is something that should be left for Congress to discuss,” Meng continued.

During the press conference, Meng told reporters that the sanctions are “a good step,” insisting that it is a “tremendous and necessary step.”

“The House previously passed legislation in May on an almost unanimous vote and this past week, President Trump signed the legislation that passed and it was again passed in a strong bipartisan showing,” she said. “I think it’s necessary. I think that whatever we need to do … to curb North Korea’s ability to increase and strengthen their weapons development is crucial.”

Queens Assemblyman Ron Kim, a native of South Korea who called on Trump to work on developing a “united front” with allied nations last month, said he is ready to support Meng.

“Congresswoman Grace Meng has been very vocal about this and any other foreign policy issue on our behalf and it’s such a tough fight for her to be down there with a president like Donald Trump and a Congress and a Senate that’s dominated by another party,” Kim told Observer. “And I just wanna make sure that she understands that we have her back, that we appreciate her sticking up for us because there are thousands of concerned Korean Americans, Asian Americans and the community at large that do not wanna see war in the Korean Peninsula.”

Kim — the first and only South Korean elected to the state Senate, whose district includes Flushing, Whitestone, Mitchell-Linden and Murray Hill — noted that Korean War veterans from the United States “have horrible night stories” about the war that he said is “forgotten in this country.”

“We have a whole collection of people that want to see Korea and want to see President Trump de-escalate and make sure that we foster the right environment where we can reunite the two countries,” Kim continued.

The assemblyman visited North Korea nearly 10 years ago with a delegation of 40 other Americans from the private and public sectors on a peacekeeping and education trip for one day, where he witnessed that people are under-nourished. He said he has family in Seoul, South Korea’s capital, including his grandmother and his cousin who is seven months pregnant.

Kim told reporters that Trump’s penchant for tweeting is alarming.

“We have a president that’s so impulsive and does his foreign policy on Twitter,” he said. “It’s a very scary thing.” 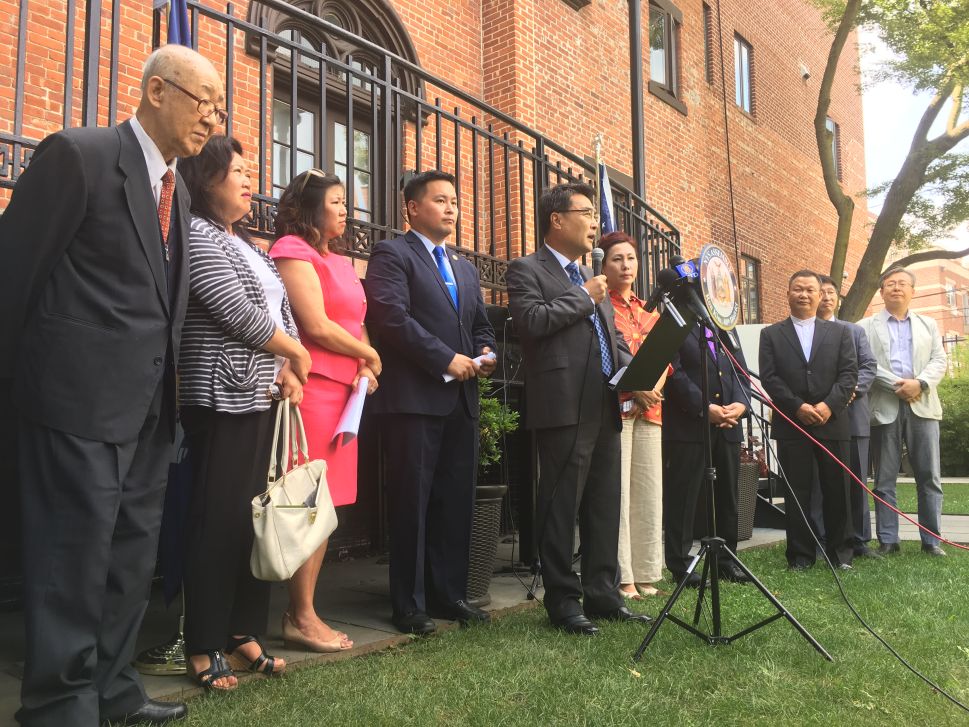