Aziz Ansari has done some pretty great standup specials, but he makes my cringe muscles ache when no one has bought tickets to hear him talk.

He attained a new level of insufferability with his GQ cover story in which—when he isn’t faux-regretfully reminding readers of how wealthy he’s become—he pats himself on the back incessantly for not carrying the internet around on his phone any longer.*

“I wanted to stop that thing where I get home and look at websites for an hour and a half, checking to see if there’s a new thing. And read a book instead. I’ve been doing it for a couple months, and it’s worked,” Ansari tells Mark Anthony Green, the magazine’s style reporter.

The story is anchored by the success of Ansari’s second season of Master of None on Netflix. It comes with a video where he shows viewers what he carries in his travel backpack, in which we learn that he still shoots photos on film (which is very precious). At the end there’s a non sequitur where he tells viewers that they should put a piece of software on their computer that only lets them use the internet for a half hour to an hour each day. That’s it.

There’s no shortage of hand-wringing stories out there about the internet shrinking attention spans. While we’re on the subject, it also gets blamed for leaving us lonelier. It’s a convenient explanation. For anyone over 20, the internet has become markedly more important over the course of our lives. In 2007, I remember having drinks with someone who said he wished there was a way to Google a question at any time.

Welcome to the future!

It’s made the internet and the mobile web the globe’s most convenient straw man. If we’ve all watched connectivity become more and more important and we feel sad, unfocused or disappointed, then maybe the fault lies with the web. Not us! Something did this to us.

Ansari buys it. He has given up carrying the internet around with him and that’s made it possible for him to read books again, he tells GQ. This echoes a frequent lament heard in complaints simmering in the constant dissatisfaction with the mobile web (at least within my filter bubble): people say that they haven’t been able to read books ever since the internet got into their pocket.

Young people seem to like books pretty well. The e-book market is consistently growing. There could be more reading than ever, but there’s just so many more ways to read now. And as long as we’re making arguments from anecdote, I sit on the internet all day long, and I also read a lot of books. I know a lot of people who do the same.

Maybe the folks who say they can’t read books anymore just don’t actually want to read them? In fact, maybe they would like to be someone who reads books, but they really aren’t. Here, the internet presents itself as a convenient excuse, one that other people who also wish they wanted to read books (but don’t) will readily agree with. Yes, it’s not our fault we don’t read. It’s Zuckerberg’s.

What makes Ansari’s admonitions especially grating, though, are the ways in which he never quite acknowledges how his advantages make it possible for him to unplug in ways most of us can’t.

First, Ansari tells Green that he’s barely consuming news any more. Green challenges him by saying he’s opting for ignorance. Ansari counters by saying, “I’m not choosing ignorance. I’m choosing to not watch wrestling.” It’s worth reminding readers here that there’s always a plausible sounding string of words that can be strung together to justify any misguided behavior. It’s also worth pointing out that this is basically the same logic as that employed by right wingers who brag about the fact that they don’t consume the “lamestream media.”

Look how that’s turned out. Follow the news, okay?

But the most important point is this: Ansari can afford to be ignorant. There’s almost no political development whose consequences Ansari couldn’t afford to escape. So why should he care if environmental regulations are slashed, health insurers can easily deny coverage again or large banks cook up a new bubble? Ansari’s stardom and his bursting bank accounts will be welcome anywhere in the world.

Which brings us to the second point: Ansari is also comfortably unemployed right now. He never needs to work again,** especially if he decided to tone down his jet-setting lifestyle. The larger theme of the the GQ interview concerns the fact that Ansari doesn’t really know what he’s doing next and he’s in no rush to find it. Must be nice.

But as I was writing this piece, one of my co-workers asked an editor to reply to an email from the train. That’s something that those of us with jobs do. Now that we can be connected, we have to be. Some of us do it more or less. Some of us are good at unplugging appropriately, such as while hiking or hanging at the beach. But no one with responsibilities completely checks out. We just can’t. That’s not how the world works anymore.

And if we waste time on our phones, what of it? Yes, we idly click and scroll and swipe when we’ve nothing else to do, but once upon a time, we read vapid magazines, completed crossword puzzles and doodled. I’m not convinced these differences are so important so much as there are far more options for idle distraction.

Besides unfocused people, there have also always been terminally single people who have longed for an explanation that exonerated their deficiencies. In science, there’s a concept called “confirmation bias.” It’s the idea that investigators will look for results or design experiments in such a way that confirm their hypothesis. It’s hard to imagine someone setting out to study the internet’s effect on attention span or community who doesn’t think it’s had one.

Ansari’s digital disconnection is an example of a wealthy person weaving an eccentricity into a virtue where there is none. Readers shouldn’t feel bad when they can’t live up to his pointless example.

Ten years from now, there will be new explanations for distractedness and loneliness and the internet and mobile web will have faded into the background of our lives as the telephone, the newspaper and the postal system did before them.

And I still won’t care whether Aziz Ansari has plugged in or not, and you shouldn’t either.

* Weirdly, for a magazine that’s so fetishistic about products and prices, the interview never explains how it is he’s doing this. It would take a special build from a device maker to make a smart phone that doesn’t have browsers and other internet enabled apps, though why would you have a smart phone if you just wanted voice and text? So is he just using a flip phone or a stick phone? Or did Tim Cook make him a special low-feature iPhone? GQ never tells us.

** In another video he describes all the vintage Rolexes he’s bought friends and family members, saying, “I hope this story doesn’t make me sound like a dick that just has so much money to buy vintage Rolexes.” IDK Aziz, how do you think it sounds? 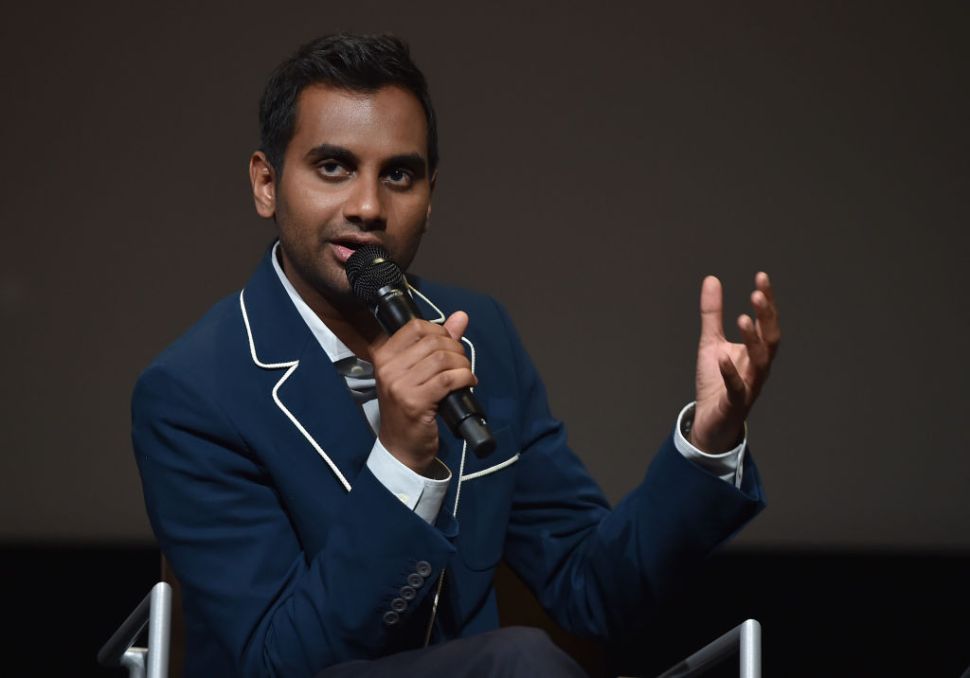