A black women comedy show hosted a “night of levity for black lives” to inspire “community” among black people, coinciding with the third anniversary of the death of 18-year-old black teen Michael Brown at the hands of a police officer in Ferguson, Mo.

The show, dubbed “A Night of Levity For Black Lives,” was hosted by monthly production “Sisters of Comedy,” a show founded by writer, activist and filmmaker Agunda Okeyo in 2014 to showcase black female comedians and celebrate black women. Black Lives Matter: NYC, which served as a co-sponsor for the show in July 2016, also co-sponsored this year. The event was held at stand-up comedy nightclub Carolines on Broadway in Times Square.

Okeyo, a Bronx native who is of Kenyan origin, said that last year’s show coincided with the death of Philando Castile, a 32-year-old black man in Minnesota, and Alton Sterling, a 37-year-old black man, in Baton Rouge, La. at the hands of police officers as well as the shooting of five police officers in Dallas. This year’s show falls on the anniversary of Brown’s death, which sparked protests in Ferguson and other parts of the United States, she said.

“We did a show last year in July and it was actually a really intense and important showcase because it was the week that Philando Castile was killed, Alton was killed and it was also the night of the Dallas shooting,” Okeyo told the more than 300 people in attendance. “And tonight, in some sort of serendipitous way, we’re coming together again to bring some levity to black lives because tonight is also the day that Mike Brown was killed — three years ago today.”

“These are really powerful, important people we can think about in our lives, right, and they sacrificed their freedom for what we believe,” Okeyo continued. “So tonight, we’re definitely saying black lives matter. We’re definitely saying we’re here to have a great night and laugh and have some levity and be able to let it out and make sure people eat and drink and are a community.”

A grand jury announced that it would not indict the police officer who killed Brown, and the U.S. Department of Justice decided against civil rights charges  — though it called for reforms to the Ferguson Police Department.

Chloé Hilliard, a comedian and journalist who has been featured on NBC’s “Last Comic Standing,” was the show’s emcee.

The comedians’ jokes centered on black women’s experiences — both joys and challenges — that hit close to home for the crowd, which was made up primarily of black women but also included black men as well as men and women of other races.

“The show is a cacophony of black female excellence,” Hilliard said, garnering roaring laughter from the crowd. “I went to college! I’m still paying that loan but I know what cacophony means!”

She blasted an individual who questioned why the show only featured black women.

“This one guy — I’ll let you guess his race — tweets back at me, ‘You’re always talking about diversity but why is everybody black?’ to which I responded, ‘Where … do you see diversity on this flyer? It says ‘Sisters of Comedy’ and you already technically have different shades of us, so boom! There’s your diversity,'” Hilliard added, again drawing raucous laughter from attendees.

Okeyo told the Observer before the show that last year, partial proceeds for the show supported Jasmine Abdullah, a Black Lives Matter leader in Pasadena, Calif., who was arrested and charged with “felony lynching,” which is defined as trying to “unlawfully remove a suspect from police custody.”

She said that working with Black Lives Matter: NYC comes down to her role as an activist — she and other activists and organizers started a “Hater Free NYC” campaign that targets any businesses associated with the administration of President Donald Trump over policies that have impacted marginalized groups. 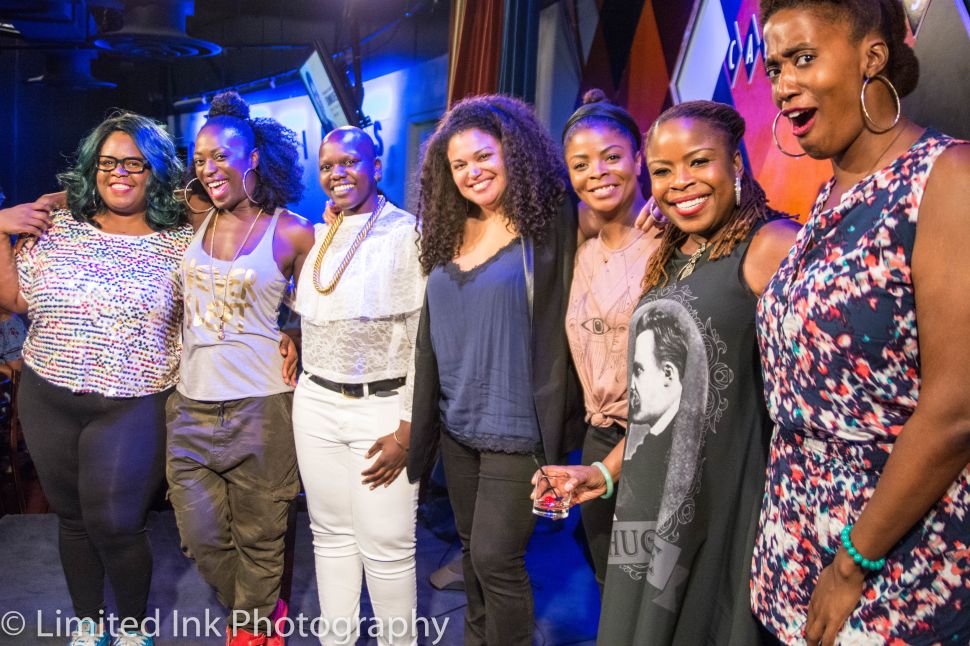