Depart from our Desert Lounge in Reno and fly directly to Black Rock City Airport–the gateway to The Playa–in less than 40 minutes. You will be flying Airbus EC-130’s that are specially designed to handle the environmental demands of The Playa, including dust particles and a low noise footprint. Allocate the 12 hours you save to helping build and sustain the Burning Man community.

Burning Man, the annual cultural gathering in Black Rock Desert, officially began on Sunday, August 27, and it will continue in a dusty haze until September 4. For better or worse, there’s no denying the event has become a bit more mainstream in the last couple of years. While some traditional, longtime fans of the festival aren’t too thrilled with this, it does mean there are some added conveniences.

This year, for the first time ever, mobile aviation app FlyBlade is available to reach the Playa.

“We have been working with the Burning Man organization for many months to offer a safe helicopter experience between Reno and Tahoe and the Playa,” a Blade rep told the Observer via email. “[One] that’s both logistically precise, as well as operationally consistent with the Burning Man ethos.”

There’s a special Desert Lounge in Reno, which will fly directly to Black Rock City Airport (the gateway to the Playa) and vice versa. The entire traveling time takes under 40 minutes, which is a serious draw for anyone who’s dealt with the trek into Black Rock Desert by car—it can take up to 12 hours. Due to the fact that the flight can be accomplished in as little as 35 minutes, Blade is confident the flight will appeal to both longtime Burners as well as newbies.

Right now, the company is only offering charters, so you can’t just book a seat. It’ll cost $3,950 to book the helicopter either to or from the Playa and back to Reno or Tahoe, but many Burners are teaming up with fellow attendees to make the price tag feel a bit more digestible.

Burning Man has strict guidelines and requirements for those attending the festival and the environmental impact on The Playa; there’s a “leave no trace” policy. But there’s no need to worry if you’re concerned about possible environmental issues arising from the use of Blade’s helicopters, as the company worked with Burning Man to make sure they comply with all of the rules. In fact, the Airbus EC-130’s are specially designed so they can handle the requirements enforced by Burning Man for The Playa, including dust particles.

Plus, if you’ve overpacked just a tad for the gathering this year (after all, appropriate Burning Man attire goes far above and beyond the requisite flower crown and glitter tattoos usually worn at Coachella and Panorama), Blade’s Cargo Logistics team is there to help you transport all your gear, including bicycles and costumes.

May all your rituals be radical. Have a great Burn. | Photo by @peterruprecht | #burningman #brc #blackrockcity #burningman2017

Demand for the Blade flights has been “overwhelming,” but there’s still availability if you haven’t figured out your transportation just yet. So if you’re preparing to head to Black Rock Desert, consider skipping that 12-hour drive in—aside from arriving in the most luxe way possible, you can spend the saved time contributing to the Burning Man community. 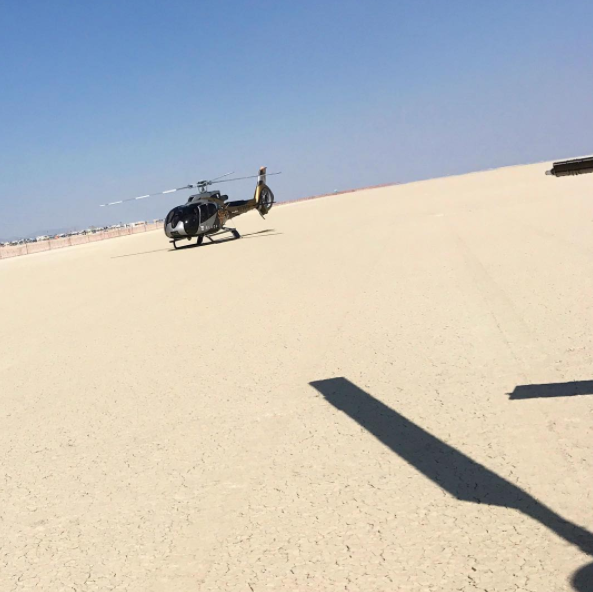