Brigitte Macron covered Elle France, and gave her first interview since her husband, Emmanuel Macron, became President. The 64-year-old wife explained why their previously controversial relationship is actually quite simple.

In Elle France’s September issue (good luck with reading it via Google Translate—it will bring black flashbacks of high school French homework gone wrong), she was photographed at the Élysée Palace, where she recently met with Rihanna. Brigitte discussed her famous husband, and their notorious 25 year age difference, which isn’t quite as shocking in France. Unfortunately, there was no mention of her fitness routine, even though she’s “in such good shape.”

“Emmanuel’s only fault, perhaps, is that he is younger than me,” Brigitte told the magazine. “When I read about us, I always get the impression that I’m reading someone else’s story,” she added. As a helpful reminder, the pair met when the politician was only 15—and one of Brigitte’s students. However, the couple didn’t officially get together until he was 17 or 18, which does make for quite the story.

When they first met, Brigitte was married with three young children who were in school with her future husband—one was even in his class. While his parents shipped him away to keep the pair apart, his senior year stint in Paris couldn’t stop true love. They married in 2007, and Brigitte has been by her husband’s side since, assisting him on the campaign trail (even her children from her first marriage joined in).

“With Emmanuel, I’ve truly gotten used to the extraordinary things that happen to me that I always wonder what will be the next adventure,” she raved about her much younger husband. The cover girl went on to refer to their love story as one that is “so simple.” She also touched upon her feelings around the First Lady label, which she refused, much to the chagrin of her husband’s constituents.

“Of course, we have breakfast in the morning, me with my wrinkles and him with his freshness, but that’s how it is,” she told the mag. Few wives could say their husband’s singular fault is his age. 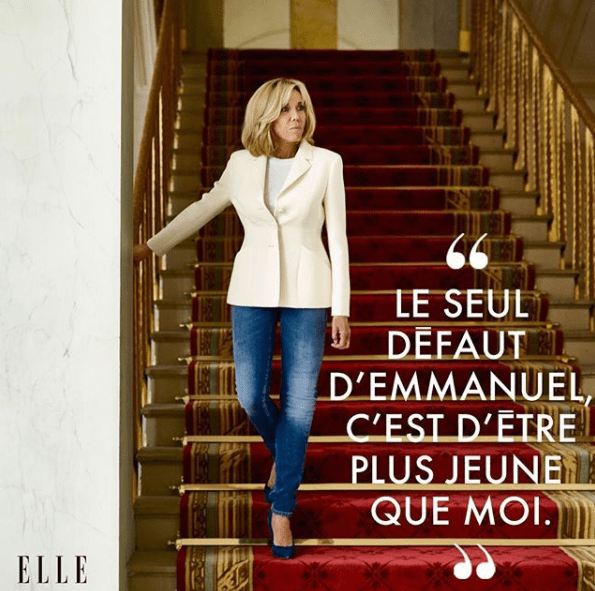