An action-thriller without any thrills is like a Big Mac without the cheese. Bushwick, by the director team Cary Murnion and Jonathan Milott (Cooties) is a noisy duh-and-so-what effort that pretends to be shot in one continual take (sorry boys, you can see the camera cuts) but seems to drag on for days.

In the opening shot, a couple walks through a deserted subway station on their way to the girl’s grandmother in Brooklyn, wondering where everybody has gone. Suddenly a cloaked figure dashes through the tunnel in flames. On their way out, they hear sirens and helicopters circling overhead. The boy is machine-gunned down, and once she reaches the street, the girl, whose name is Lucy, is tackled and handcuffed by a man wearing a mask, who is then massacred himself by artillery fire from a passing car. Martial law has been declared, but why? Shortly after, the girl is befriended by a tough Marine named Stupe who reluctantly lets her tag along as he tries to make his way to Hoboken. The movie has only been running a few minutes, and already it’s as dopey as a dwarf who escaped from Snow White. It takes almost an hour before Lucy (Brittany Snow) and Stupe (Dave Bautista) learn what all the violence, panic and bloodshed is about. Are you sitting down? In the brain-dead script by Nick Damici and Graham Reznick, it appears that Texas has decided to secede from the union, and all of the other Southern states have joined the Lone Star state in support, forming something called the New American Coalition, to invade Northern cities like New York in support. In the massive war that ensues, the body count rises. Needless to say, Lucy never reaches her destination to find out if her grandmother is dead or alive; instead, she spends the rest of the movie ripping glass splinters out of her companion’s back and sewing him up with string, rescuing a herd of innocent victims hiding out in a church with the aid of a gang of killers (she needs their guns), and following her military Marine Corps protector through the Bushwick section of Brooklyn, dodging bullets, rapists, and marauding armies of mercenaries with accents that sound like the cast of the Beverly Hillbillies. They bandage each other’s wounds. A sniper blows one of her fingers off. Already preposterous as a 19-dollar bill, the movie turns hilarious when Lucy enters a store that is being looted where she pauses to listens to a radio announcer who promises an address by Donald Trump. In the end, there’s nobody left alive, including the president of (what is left of) the good old U.S.A. The demilitarized zone is somewhere in Queens.

Where do they think up this stuff? The screenplay promises more excitement than it delivers, fails to develop characters beyond their most tertiary identities, and belly-flops even as political satire. The actors struggle to keep the audience awake, but it’s hard to work up much concern for people you never know anything about. With the problems of racist brutality in the current construct, somebody must have considered tapping into the moral and ethical divisiveness rampant in America today a political  challenge that goes great with popcorn. Instead, it just seems exaggerated and silly. Maybe there’s an idea rattling around in here somewhere, but I’d like to see it in a better movie than Bushwick. 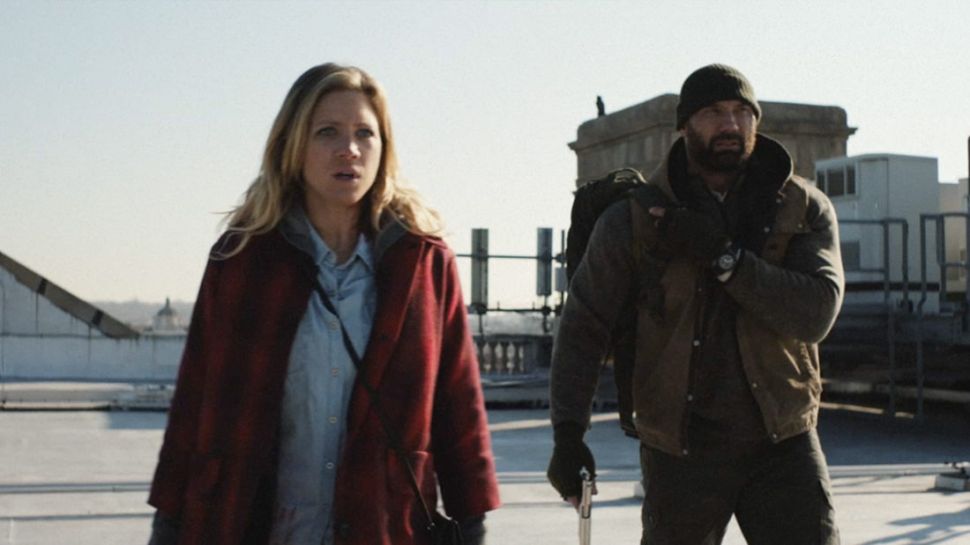