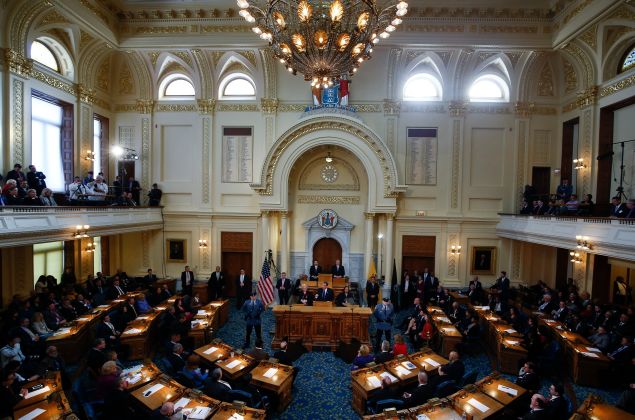 New Jersey’s transfer of lottery revenue to its cash-starved pension system is a modest but positive financial move that decreases the risk of state officials skipping pension payments in the future, Moody’s Investors Service said in a report last week.

But the ratings agency said the transaction does little to reduce the state’s overall pension burden, one of the biggest financial problems weighing on New Jersey taxpayers after decades of mismanagement from elected officials in Trenton.

Moody’s, the first Wall Street ratings agency to weigh in on the state’s lottery transfer, called the action “slightly credit positive” in a report released Friday.

Analysts at the firm said the shift of roughly $1 billion in annual lottery revenue to the pension fund, paid out on a monthly basis, along with a separate law requiring the state to make pension payments divided into four quarterly installments instead of one at the end of the fiscal year, reduce the risk of a last-minute cut to the state’s pension contribution that could further batter the retirement funds.

But those preventive measures are pretty much the only real benefit, Moody’s said. On the financial side, the picture does not improve because of the lottery transaction, which runs for 30 years.

Moody’s noted that the $1 billion in yearly revenue from the lottery will mostly replace planned pension contributions that otherwise would have come from the $34.6 billion state budget. Analysts at the firm agreed with state Treasurer Ford Scudder that the transfer will therefore have a neutral effect on the state’s budget and annual pension contributions for five years.

“As a result, there remains considerable risk that the state will be unable to afford rapidly growing pension contributions without implementing structural revenue or spending changes, and such changes could prove very difficult to implement,” Moody’s said.

Gov. Chris Christie cut more than $2 billion over two budget years in 2014 to resolve a steep revenue shortfall caused by faulty revenue forecasts, leading to a long legal battle that he eventually won against the state’s public-sector labor unions. This year, in an effort to improve the pension system before he leaves office in January, Christie partnered with Democrats on the lottery transaction.

Advocates of the plan say it will provide a stable stream of revenue the troubled pension system and immediately increasing its funded ratio from 45 percent to 59 percent.

The state valued the lottery at more than $13.5 billion, and Scudder estimated in May that it would generate $37 billion for the pension system over the 30-year period.

The state will pay a record $2.5 billion into the pension system in fiscal 2018, with $1 billion coming from the lottery. But that’s less than half of actuaries say is required to adequately fund the retirement system. The state won’t make a full payment of roughly $6 billion contribution until 2023 under its current projections, according to Moody’s.