Former City Council Speaker Christine Quinn, who ran against Bill de Blasio in the 2013 mayor’s race, announced that she is backing the mayor for re-election on Thursday, 19 days ahead of the Sept. 12 primary.

Quinn, who represented Greenwich Village and Chelsea, defeated de Blasio, then a councilman from Park Slope, to become Council speaker in 2006. She became the first female and openly gay speaker. In 2013, she was seen as the front-runner in the Democratic primary for mayor, but ended up losing to de Blasio following a spate of negative ads and publicity. She came in third in the Democratic primary.

Quinn, now head of the housing nonprofit Women in Need (WIN), has been working more with de Blasio on tackling the homelessness crisis but has often criticized his approach. In June, she and advocates argued that the city should eliminate a five-year limit on a rental assistance program and ensure that youth who no longer qualify foster care can benefit from it in order to decrease the number of families living in homeless shelters.

But Quinn also has praised the mayor, City Council Speaker Melissa Mark-Viverito and the Council for dedicating or increasing funding to programs like Breakfast in Classrooms, adult literacy and summer youth employment in the 2017-18 budget.

“I’ve worked closely with Mayor de Blasio throughout his first term,” Quinn said in a statement. “It’s clear that with every decision, he’s doing his part to ensure that New York puts progressive values first. He has proven to be a strong ally as the city reforms the homeless shelter and homeless services sector, works to create more affordable housing, and fights for resources in a hostile federal environment. I fully support his re-election.”

At the end of February, de Blasio announced his plan to mitigate the homelessness crisis plaguing the city, which looks to lower the record 60,000 people living in city shelters by 2,500 — about 4.17 percent — over the next five years. The mayor said the city would open 20 new shelters this year and 20 more next year in an effort to open 90 such facilities over the next five years.

In October 2016, Quinn wrote an op-ed in which she blasted the mayor for not sufficiently addressing the needs of women and families. She noted that 51 percent of the women living in a WIN shelter work and that 91 percent have a history of employment. She credited the de Blasio administration with expanding housing subsidies and preventive services but said that more needed to be done.

Quinn credited the de Blasio administration for “doing a lot” to address the homelessness crisis, its focus on supportive housing and said she appreciates that the city has reestablished voucher programs to help people get out of the shelter system. But she said that the city has not succeeded as long as they have a large number of children and families living in shelters — insisting that there’s “no celebration till the job is done.”

In December 2015, she praised the 90-day review underway of the city’s homeless services, being led by Human Resources Administration Commissioner Steven Banks and said she would provide her own input.

At the time, de Blasio said he and Quinn had been looking to find an opportunity to collaborate publicly on the issue of homelessness since she took the helm at WIN. Quinn also said  she had been working with the administration more quietly and that she had “been given nothing but the highest level of access” to the people with whom she needed to speak. 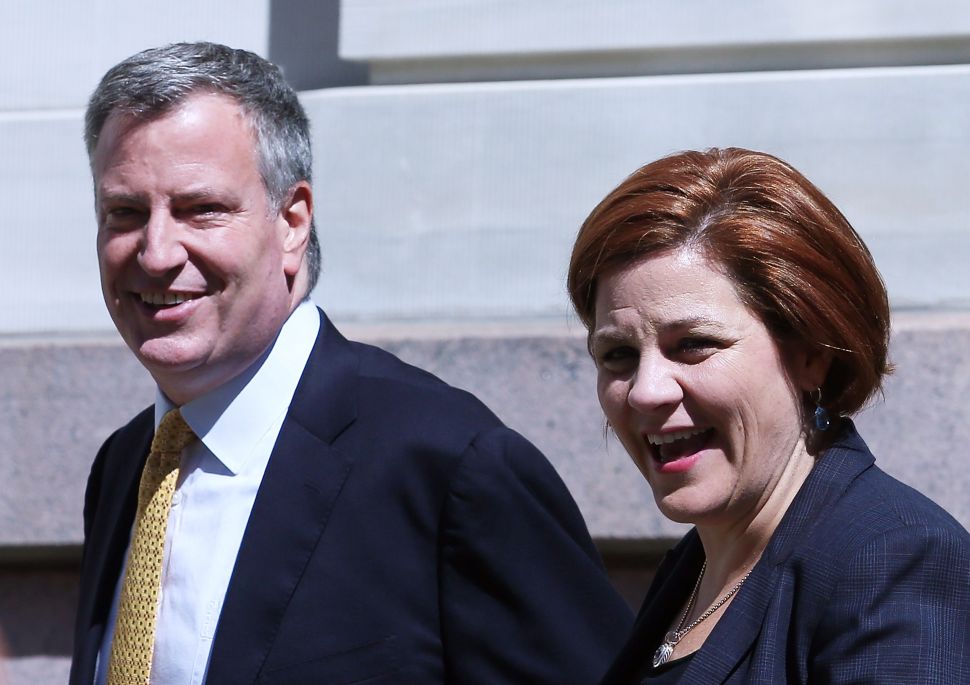