City Council Speaker Melissa Mark-Viverito proclaimed today that she would “continue to advocate” to get Staten Island District Attorney Michael McMahon on board with a citywide effort to get rid of old summons warrants after the four district attorneys vacated more than 640,000 today.

This morning, in Brooklyn Criminal Court, acting Brooklyn District Attorney Eric Gonzalez announced that he is moving to dismiss 143,532 summons warrants that were issued 10 or more years ago. The warrants were issued for failure to pay a ticket for a minor infraction, subjecting individuals to arrests as well as other negative consequences. Manhattan District Attorney Cyrus Vance also erased more than 240,000 warrants in Manhattan Criminal Courts building today.

At the end of July, McMahon declined to participate, arguing that the program is “unfair” to individuals who come to court for their summonses. But he said he would continue to support Fresh Start events that enable residents to settle outstanding warrants.

“I think we’re gonna continue to advocate,” Mark-Viverito said in Brooklyn Criminal Court. “Again, this is people, these are not just numbers. These are people that have had no contact with the criminal justice system. These are nonviolent offenses that now you have an outstanding warrant for your arrest. So we believe very strongly in this and I’m very happy.”

She told reporters that she was “very emotional” as the judge granted the motion inside the courtroom given “how many lives we are impacting.”

“We’re going to continue to make the case to the DA in Staten Island, I will, that he should be part of this and add those warrants to the docket as well,” Mark-Viverito continued. “So it’s unfortunate that we were not able to get all five, but we’re gonna continue to advocate. This is the right thing.”

When the Observer asked Mark-Viverito at her monthly pre-stated meeting this afternoon for specifics on her advocacy efforts and what will make McMahon change his mind, she said that it’s all in the numbers — and that it’s “unfortunate” McMahon “feels differently.”

“We have a great working relationship,” she added. “There are initiatives that we are engaging with, that we support, that we have funded through the City Council that we engaged with the Staten Island district attorney. I’m going to continue to talk to him about this issue because the numbers bear it out and this is a common sense thing to do.”

She noted that it saves city resources, leads to the courts being less bogged down and that police officers can focus on making communities safer instead of chasing down warrants.

“There’s a lot here and I think common sense will prevail,” she said.

The speaker said she had conversations with McMahon “when we were doing this” and will continue to include him in discussions moving forward.

“I will now seek to include him to be part of that comprehensive package, but conversations to come,” Mark-Viverito said.

Gonzalez said that many individuals did not realize that the warrants were issued in the first place.

“The tickets that they had received never indicated that a warrant would be generated,” he said. “The court system never provided notice that a warrant had been issued and additionally, there had been no second court dates offered.”

Gonzalez told the Observer following the press conference that he speaks with McMahon “all the time” but that he will not get into the details of those conversations.

“The Mayor’s Office of Criminal Justice has had conversations with all the DAs about how we can coordinate this and at this point, DA McMahon has not joined and they will continue — the speaker and the mayor’s office — will continue to have conversations with him about what’s appropriate in his jurisdiction,” Gonzalez continued. “I’m very grateful that in Brooklyn, we’ve been able to dismiss 143,000+ warrants.”

In a statement provided to the Observer, McMahon said he wants to continue to protect Staten Island’s quality of life and noted his support for the Fresh Start events that include summons for offenses such as loitering, drinking in public, riding a bicycle on the sidewalk, having an unleashed dog and illegal marijuana possession.

“While I have supported holding our Fresh Start events on Staten Island where individuals can take personal responsibility and request that their summons warrant be dismissed, I believe that issuing blanket amnesty for these offenses is unfair to those citizens who responsibly appear in court and sends the wrong message about the importance of respecting our community and our laws,” he said.

Staten Island resident Cesar Vargas, New York’s first openly undocumented lawyer, said he and other activists are pushing for an an immigration unit office to handle crimes against immigrant communities and that they worked with him on the Fresh Start initiative.

Vargas, who also serves as co-director of the DREAM Action Coalition, said he thinks that Mark-Viverito and de Blasio’s unpopularity on Staten Island — and an assumption that the issue doesn’t affect borough presidents — may be influencing McMahon’s decision.

“Definitely, it’s a political calculation that DA McMahon misreads on his ability to say, ‘Well, I don’t think Staten Islanders are like that,'” he told the Observer in a telephone interview.

He praised Mark-Viverito for her advocacy, though he acknowledged McMahon must be under intense pressure both by law enforcement and on the “political side” to deal with the summons warrant issue — and that there are a number of issues plaguing the borough, including the opioid epidemic.

He said that he “definitely” thinks McMahon will get on board, also noting that they will have to do “ground work,” including speaking with him directly and letters to the editor.

In a statement, de Blasio praised the move, saying that everyone is safer when police officers focus on preventing crime and arresting “dangerous criminals” instead of processing the arrests of individuals “who pose no threat to public safety.” 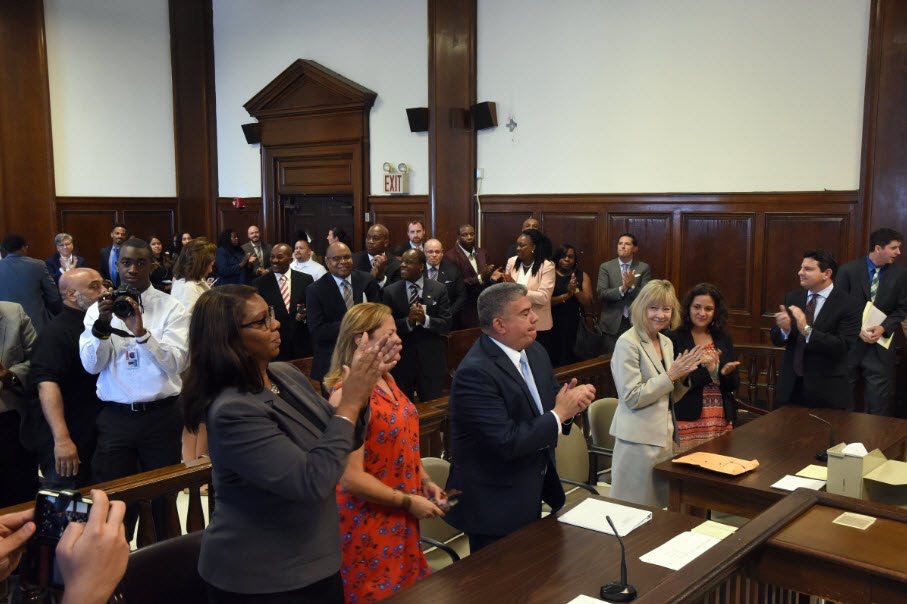