Columbus, Ind., population just under 47,000, is Mike Pence’s hometown. Mind you, it’s not particularly surprising that this south-central Indiana city, the seat of deep-red Bartholomew County, would be the birthplace of the conservative vice president. But what might be surprising is that blooming amongst the signs for Rally’s and McDonald’s in this prairie city are some of the greatest examples of Modern architecture ever assembled. Every civic structure—church, firehouse, bridge or library—seems touched by some otherworldly magnificence. Many of them are built from designs sprung from the brows of some of the 20th century’s greatest architects: Eero Saarinen, I.M. Pei and Harry Weese. Encountering this kind of beauty in a place where you least expect to find it can fill one with inexpressible joy, but can also be strangely disorienting and can even leave you feeling sad and disconnected.

Video essayist Kogonada’s debut film is a tone poem about both that feeling and the town. It is a contemplative mood piece about the nature of place and family, wonder and disappointment. It will remind many of us of another time, before our collective headspaces were devoted to politics and finance, when we would willingly spend long afternoons smoking cigarettes and talking about the nature of art and existence. There is plenty of talk in the movie, but a great deal of silence as well, all of it precisely calibrated. Some may find it tedious watching characters drift between reverently framed structures, clumsily expressing their feelings or puzzling out ideas. Others, like me, will find it pleasingly relaxed and ruminative, as it builds towards a subtle, emotional conclusion that satisfies—while never quite wrapping everything up. Either way, this stroll through a living museum of Modern masterpieces (not to mention a bed and breakfast that will forever change your opinion of them) has a grandeur and precision that deserves to be witnessed in a movie theater. Save The Dark Tower for VOD; get in the car to see Columbus.

While there is not much plot to Columbus, there is a story and it’s a lovely one. When his father, a famous architecture scholar, falls seriously ill in Columbus while on the lecture circuit, Jin (John Cho), a book translator living in Seoul, arrives to be with him, even though they are estranged. Jin, who has no interest in architecture himself, happens upon Casey (Haley Lu Richardson), a recent high school graduate who is in a blissful state of stasis, deeply under the thrall of her town’s architecture. She also cares for a parent, her mother, a recovering drug addict. (“Meth and Modernism are really big here,” says Casey.) They gradually tease out their fears and doubts, as Casey introduces Jin, and by extension the audience, to the buildings, speaking not of their architectural magnificence but about her emotional connection to each. With his camera placed at a low, deferential angle, and from a respectful distance, Kogonada presents the structures with a kind-of wide shot wonder reminiscent of the way John Ford captured Monument Valley.

This is not Before Sunrise: no romance blooms between Jin and Casey during their Socratic back and forth. (Instead, a very good Rory Culkin, playing a burdened-by-graduate-degrees slacker librarian, furtively pursues Casey; Jin meanwhile makes a regrettable pass at Parker Posey who plays one of his father’s mentees.) But their connection is nonetheless electric, and perfectly built by the lead actors. Cho has the unforced masculinity and patience of a romantic leading man—the kind of roles Asian-American men rarely get to play—while Richardson has a naturalism that plays beautifully against the rigidity of the Modernist structures. Sometimes it feels like Kogonada (an invented name inspired by Akira Kurosawa’s screenwriter) is almost too reverent of them, but you quickly realize that is how he views everything, not just National Historic Landmarks. Cinematographer Elisha Christian’s camera presents a sick father’s hat absentmindedly left on a chair with the same sense of wonder and questioning that it does Henry Moore’s sculpture Large Arch.

As much as it is about architecture, the film is also a love letter to movies themselves: the sense of majesty they can capture and the strange little worlds they allow us to discover. As such, this modest, quiet-yet-talky little independent film really needs to be seen at the cinema, and away from the distractions and pressures of home. A movie theater is the best way to make an emotional connection to the film’s aesthetic ideas about symmetry and balance, weight and lightness. Of course this is true of many films that focus more on mood, feeling and concepts than plot—Terrence Malick’s movies come to mind. Even when we don’t love them, our jaw drops; yet if we were watching on our computers, we’d probably be checking Facebook. Columbus is the perfect film with which to take back the movie-going experience from seat-shaking Dolby sound explosions, towards an exploration of real emotion against a backdrop of stunning imagery. After all, isn’t that what we started going to the movies for in the first place? 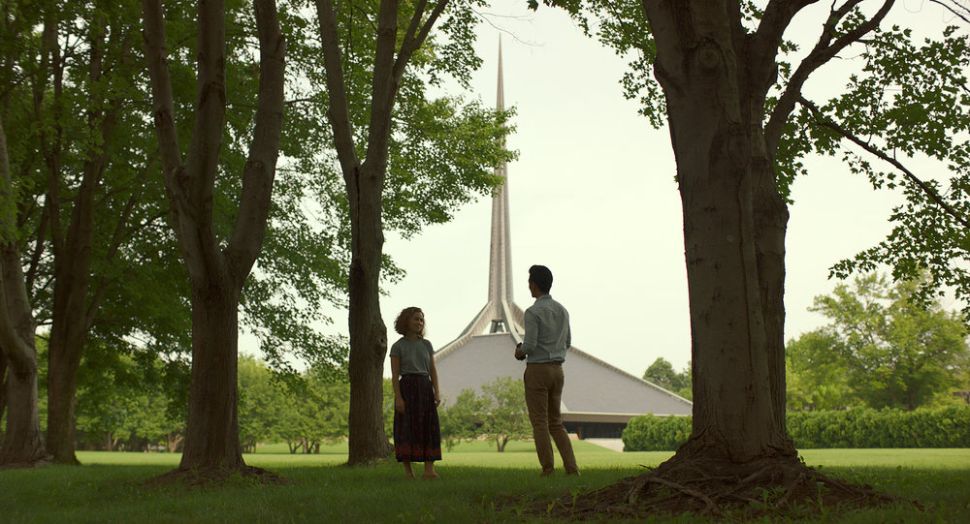