One of the many effects of this weekend’s domestic terror attack in Charlottesville, Va. was the increased notoriety of the neo-Nazi website The Daily Stormer. After 32-year-old Heather Heyer was killed in the violence, the site published a story calling her “a fat, childless, 32-year-old slut.”

As such, last night pressure began to mount on GoDaddy, the company that hosted The Daily Stormer. Activists like Amy Siskind pressured GoDaddy to ban The Daily Stormer from their platform.

Within two hours, GoDaddy ordered The Daily Stormer to move its domain to another provider within 24 hours so as not to violate GoDaddy’s terms of service.

It didn’t even take that long. This afternoon, GoDaddy posted an update saying it no longer hosts The Daily Stormer domain and called out its new owner by name.

The domain is no longer at GoDaddy & we don’t host the site. We recommend contacting their hosting provider (Cloudflare) and law enforcement

.@Google The Daily Stormer, the neo-Nazi website, is now registered w you after being kicked off @GoDaddy for their hate. Please remove! https://t.co/04e1ldRMBz

Indeed, a domain name search reveals that (for a little while at least) The Daily Stormer was registered under a Google domain and IP address. And since computers communicate with IP addresses rather than URLs, The Daily Stormer was (and still is) using Cloudflare as a middleman to find the IP address and connect users to the site once they type in the URL. By providing security to the site, Cloudflare hid the fact that Google was the real host.

But once the internet turned its rage over to Google, the company almost immediately disavowed The Daily Stormer. Google cancelled the site’s registration within two hours, revealing that it did indeed violate the Mountain View tech behemoth’s terms of service. It also took down The Daily Stormer’s YouTube channel.

Cloudflare said in a statement to the Observer that it found The Daily Stormer’s content “repugnant,” but that since it wasn’t the site’s host, it couldn’t do anything.

“Cloudflare terminating any user would not remove the content from the internet, it would simply make a site slower and more vulnerable to attack,” the company said.

As if to prove this point, it looks like The Daily Stormer was hacked in the middle of the hosting drama. Early this morning, a post allegedly authored by the hacker group Anonymous went up on The Daily Stormer site, stating that “evil cannot be allowed to stand.”

The Anonymous party didn’t last long, however. Daily Stormer publisher Andrew Anglin published a post several hours later, saying, “They keep knocking us down, but we get right back up, bigger and stronger than before.”

There’s just one problem: The entire hack may have been staged by The Daily Stormer to distract from the GoDaddy controversy. Anonymous tweeted that it had not hacked the site and said the stunt was the work of “derps…engaging in a silly troll to woo their clueless base.”

This theory is backed up by the fact that The Daily Stormer site was still accessible during the hack, and the “hackers” said they would allow the site to stay up for 24 hours “so the world can witness the hate.”

Indeed, it would make little sense for hackers to give their target a full day of free publicity before taking down the site. Although since The Daily Stormer’s hunt for an online home continues, it’s hard to argue this stunt did them any favors. 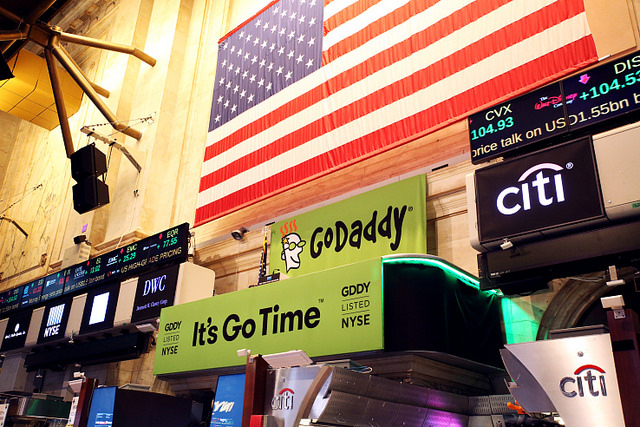