Near Mint, is our weekly comics column where we discuss all the KAPOW! that’s fit to print. This week: Yet another crossover story arc from the good old boys at DC.

Why are comic book worlds always obsessed with creating new kinds of metal? In the Marvel universe, Adamantium makes up Wolverine’s indestructible skeleton. Vibranium, a fictional substance known for absorbing sound and kinetic force, is found in Captain America’s shield and the mesh of Black Panther’s suit. Perhaps it’s because superheroes burst into existence in 1938 slightly after the second industrial revolution, which was brought on by new developments in steel manufacturing? In Chinese Feng Shui, metal is the element of protection, and superheroes exist to protect the populace. It’s probably just that metal is used to make weapons, and superheroes fight a lot. What if one of the greatest superheroes, was actually a harbinger of metallic death?

Herein lies the zany premise of DC’s big new 25 issue story-arc, Dark Nights: Metal—the first issue of which came out last week. Dark Nights: Metal creates a conspiracy that connects the different heroes of the DC universe by the metals they use in their weapons and armor. Wonder Woman’s bullet-deflecting bracelets, the Nth metal in Hawkman’s mace, and Dr. Fate’s helmet, are all somehow connected. Even the metahuman gene (the DC’s version of mutants) is revealed to be brought on by elevated levels of a particular metal within the body. Finding out what this all adds up to will probably take the better half of 25 issues.

Two prequel comics preceded Dark Nights: Metal. They were Dark Days: The Forge and Dark Days: The Casting. Over those two issues, readers received a crash course in Hawkman’s complicated lineage. Properties in a Nth metal spaceship that crashed on earth during prehistory have somehow resulted in Hawkman and his paramour Hawkgirl being reincarnated over and over again throughout time. We also learn that Batman’s been breaking Justice League protocols by keeping the Joker trapped in the basement of Wayne manor, and Wonder Woman gifts Bruce with a flaming sword. Everyone from Mr. Terrific to the Blackhawks is involved, and if you don’t know who all these people are, good luck understanding what’s going on. And even if you do know the characters don’t be so sure you remember their backstories.  The constant reboots to continuity at DC over the past 20 years might have given your favorites origins that differ from what you recall. The constant winking at historic moments and obscure characters from the DC pantheon can become almost dizzying. The battered continuity doesn’t help clarity.

Dark Nights: Metal  has a multidimensional plot that recalls another over the top DC crossover, 2008’s Final Crisis, where a singing Superman and a Super-Obama thwart alien war god Darkseid. Written by noted chaos magician Grant Morrison, Final Crisis was the third in a trilogy of reality warping crossovers that started with Crisis on Infinite Earth in 1985. Dark Nights writer Scott Snyder trades Morrison’s occult edge for an almost child-like giddiness. The first issue of Dark Nights gives us a Justice League piloted giant robot with a floating green orb hovering in front of its crotch. Promotional materials for Dark Nights: Metal have starred a crew of metallic bat creatures straight from the book of Revelations. And both of these last two concepts seem perfect for a niche toyline. And what’s wrong with that? Toys and statues are actively beloved by many comics fans, and while it may seem absurd to pay $800 for a single War Machine Statue, that’s still considerably more affordable than a lot of fine art!

Dark Nights: Metal #1 is drawn by Greg Capullo, who famously worked with Scott Snyder on a best-selling Batman story arc. Capullo’s solid pencil work in collaboration with inker Jonathan Glapion can feel a bit scratchy at times, but maybe they’re trying to invoke a cross-hatched 1990s look. If that’s the intention, they could’ve taken things further. Several of the covers for these Dark Night stories have metallic embossing that feels shamelessly ’90s; a time when that kind of printing was common, and metal music topped the charts. Capullo does a good job at telegraphing combat and is at his best when things are weirdest; a panel where Batman escapes a fight clinging to the back of a velociraptor is especially satisfying.

What Scott Snyder and Greg Capullo have crafted here will be confusing to even long-time comics fans. So far, the story doest  deliver any strong thesis, but with another twenty issues to go, that’s almost O.K. One clear storyline, however, seems to be that Batman is a jerk. Considering that Bruce’s superpower is money and he uses children to fight for him, it’s always worthwhile to take that suggestion to the limit. This comic succeeds at feeling like a uniquely DC comic, with looney concepts, unlikely connections and an ending that declares yet another bizarre team up. Yet with all the alternate dimensions and lengthy timelines bandied about in these first pages, the appearance didn’t surprise me.  It’s now up to Scott Snyder to make the new mergers intriguing. It’s possible he’s up for the task. 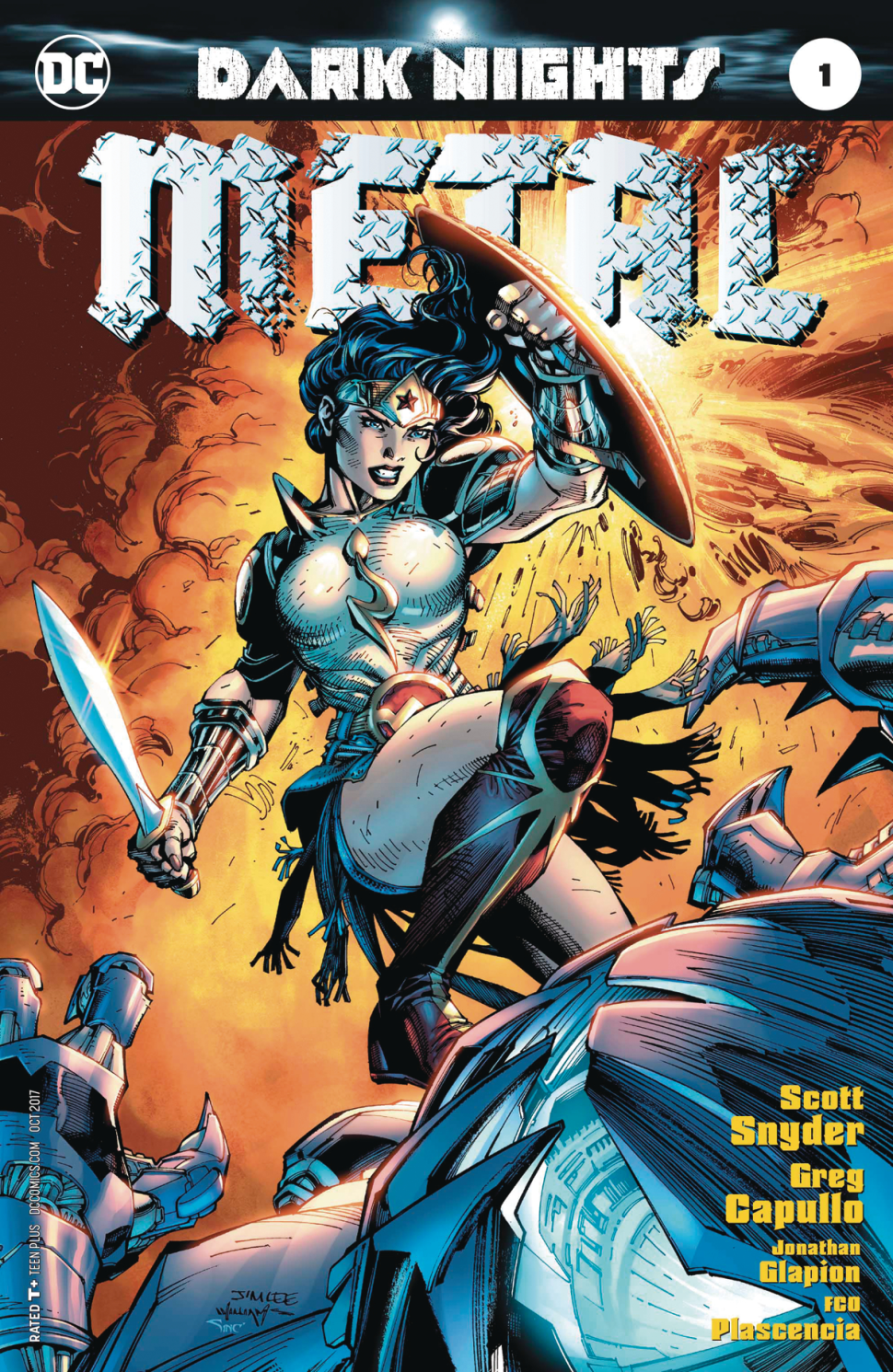