In 2015, Sony Pictures saw its lowest domestic gross in 10 years, according to Box Office Mojo, as the studio continued to recover from the fallout of the devastating cyber attack a year earlier. Their crown jewel – The Amazing Spider-Man franchise – was smushed thanks to poor reviews and dwindling box office returns, as were plans for a connected Spidey-verse.  Other expensive misses further hurt the bottom line and on top of all that, the studio was set to lose the rights to the James Bond franchise after 2016’s Spectre.

You could say this was a sub-optimal year for them.

But amid all the chaos in 2015, Sony also quietly announced its plans for an adaptation of Stephen King’s The Dark Tower series. The author’s beloved and ambitious epic had been languishing in developmental hell (or Mid-World, for all you Tower fans) for more than a decade. Several different studios and directors emptied their creative clips at the project to no avail. The source material was considered unadaptable as it traversed sci-fi, fantasy, horror, Westerns and Arthurian legends while connecting many of King’s most iconic works…which is exactly why it was the perfect bet for Sony. The studio was slumping badly and needed to swing for the fences to win back audiences, establish a new money-making franchise and impress critics. They needed a game changer and The Dark Tower, on paper (all 4,250 pages of it), fit that criteria.

Since the bold undertaking, however, the film’s release date has been delayed several times (never a good sign) and its trailers have been more lackluster than the second season of True Detective. It now looks as if Idris Elba’s Gunslinger will be D.O.A. when the film finally hits theaters this Friday (Variety reports that it is currently tracking for a so-so mid-$20 million opening)

But you know what? The Dark Tower could be the worst movie of the summer and not earn a single dime, and Sony still would’ve made the right call by pushing forward.

King’s magnum opus sports eight novels written over 30 years with two flashback-centric books that lend themselves perfectly to supplemental small screen content (producer Ron Howard and writer Akiva Goldsman are still hinting at a companion TV series). There’s also a well-received comic book series that serves as further connective tissue. All the material is there for a mega cross-platform franchise that springs multiple revenue streams. The Marvel Cinematic Universe has been rightfully criticized for the disconnect between its film and television properties. Sony could have succeeded where they failed and even expanded upon that model. Ka is a wheel, after all.

And despite the density of the source material and its far flung story, you can see the inherent appeal. It’s Lord of the Rings meets Game of Thrones mixed with Blade Runner and it already boasts millions of established fans worldwide. The Dark Tower could’ve been the thinking fan’s fantasy franchise, a masterclass in genre subversion and melding that appealed to a wide swath of audiences. Old, young, familiar with the source material or a complete newcomer. Everyone could find something in the broad yet highly stylized and nuanced story.

The books established a wholly unique atmospheric tone that mashes together present day earth and the desolation of “moved on” worlds. Imagine the barren wastelands of Mad Max juxtaposed with the kinetic New York City. This is the rare project where the setting is a character all its own. The story, meanwhile, whips time-hopping parallels to today’s climate in carefully crafted subplots and the bonds between the central characters rival the likes of any Gryffindor squad or Jedi Order. A visionary director could paint the vividest of pictures to play with the viewer’s mind. Is Nikolaj Arcel that guy? His work on A Royal Affair earned him an Oscar nomination, but he’s never overseen a production of this scale and behind-the-scene reports are less than ideal.

The Dark Tower books are big and bold and absolutely insane. Sadly, the movie does not look as if it follows suit (critics are only getting to see the film 24 hours before its release, also never a good sign). But regardless of the final product, Sony needed to do something, anything, to try and shake them out of their funk. The studio deserves credit for taking a risk in an era of cookie-cutter company cowardice.

What else was Sony going to do, make a sequel to Pixels? 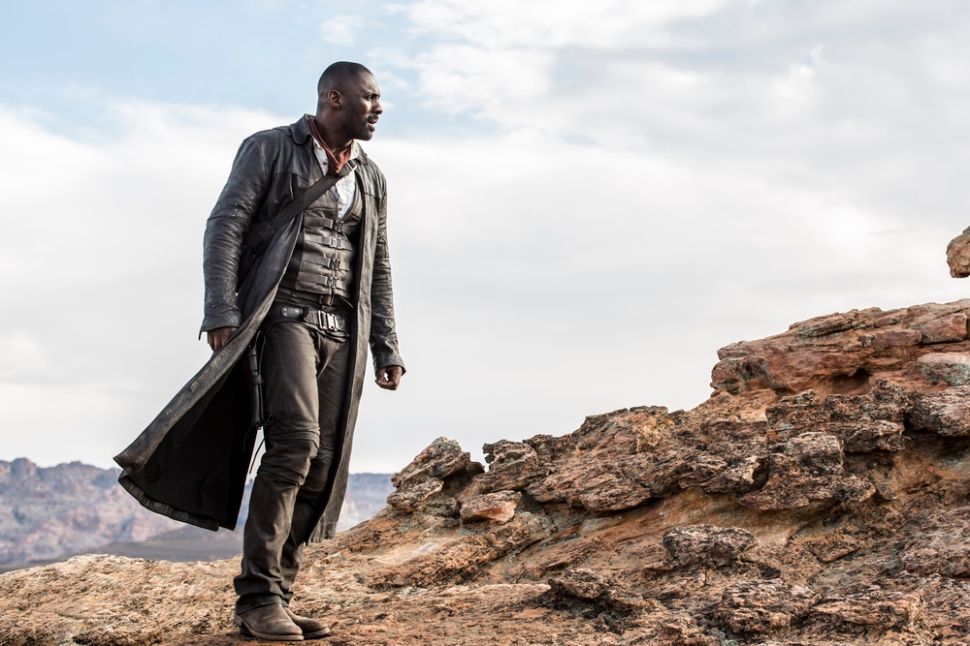