Mayor Bill de Blasio said Monday that he will “definitely” be marching in the Columbus Day Parade in October amid backlash from Italian American leaders over news that the city will consider removing the statue of Christopher Columbus in Columbus Circle.

He also suggested that some controversial statues might not be removed by the city. Instead, some might have a plaque added laying out more context and history.

Italian American elected officials and community leaders — led by Staten Island Councilman Joe Borelli — took to the steps of City Hall to blast City Council Speaker Melissa Mark-Viverito and de Blasio for considering removing the statue. Columbus is known for discovering the Americas as he was sailing for Asia, but later known for aggressive moves to colonize and oppress natives.

Staten Island Sen. Diane Savino, a member of the Senate Independent Democratic Conference that has a power-sharing agreement with Senate Republicans, took to Facebook to voice her own complaints, calling de Blasio “gutless” and Mark-Viverito “ignorant.”

De Blasio told reporters at an unrelated press conference in Brooklyn that he has no plans to skip the parade, which will take place on Oct. 9 along Fifth Avenue.

“I will definitely be marching in the Columbus Day Parade,” he said. “The parade is a moment to express our pride in our Italian heritage, for all of us who are Italian, and for others to recognize the contributions of Italian Americans have made to New York City and to the whole country. So I’m absolutely comfortable continuing to march. I have marched for years in that parade.”

The mayor said that the city plans to announce the names of the members of the commission he is convening to conduct a 90-day review of all statues and monuments on city-owned land “hopefully in a matter of days.” And he said that critics have been making judgments too soon about the matter.

“I think there’s been a bit of a rush to judgment,” de Blasio continued. “I’d like to address this preemptively. Assuming what such a commission does, we’ve said very clearly we’re going too name a group of New Yorkers who have real expertise in considering these issues. They’re issues that are being thought about all over the country.”

He stressed that there are other options that will be considered in addition to “fundamental change or removal” as violence stemming from a white nationalist rally in Charlottesville, Va., has renewed calls for the removal of confederate memorials nationwide.

“A commission looking at its criteria could say, ‘Here’s a situation where we don’t think anything specifically needs to happen,'” he added. “They could also say, ‘Here’s a situation where we think there should be a plaque added to provide some of the history and provide some of the balance in understanding what happened in this specific period with this particular individual, this particular history.'”

In 2013, de Blasio said that there are “some troubling things” in Columbus’s history. Mark-Viverito, for her part, said that the commission would evaluate all monuments and statues and that her focus is on getting another statue removed.

The speaker and Harlem elected officials held a rally to request the removal of a statue of J. Marion Sims, a 19th Century doctor who has been rubbed the “father of modern gynecology,” from Central Park, where it is situated on East 103rd Street in East Harlem. Sims experimented on African slaves without their consent or any anesthesia throughout his career. During the rally, the speaker said that the statue of Columbus should be also be evaluated.

Although a mayoral spokesman told Observer that the Columbus statue “will get very immediate attention because there’s been tremendous concern raised about it,” de Blasio refused to comment on any specific statue during the first Democratic mayoral primary debate. 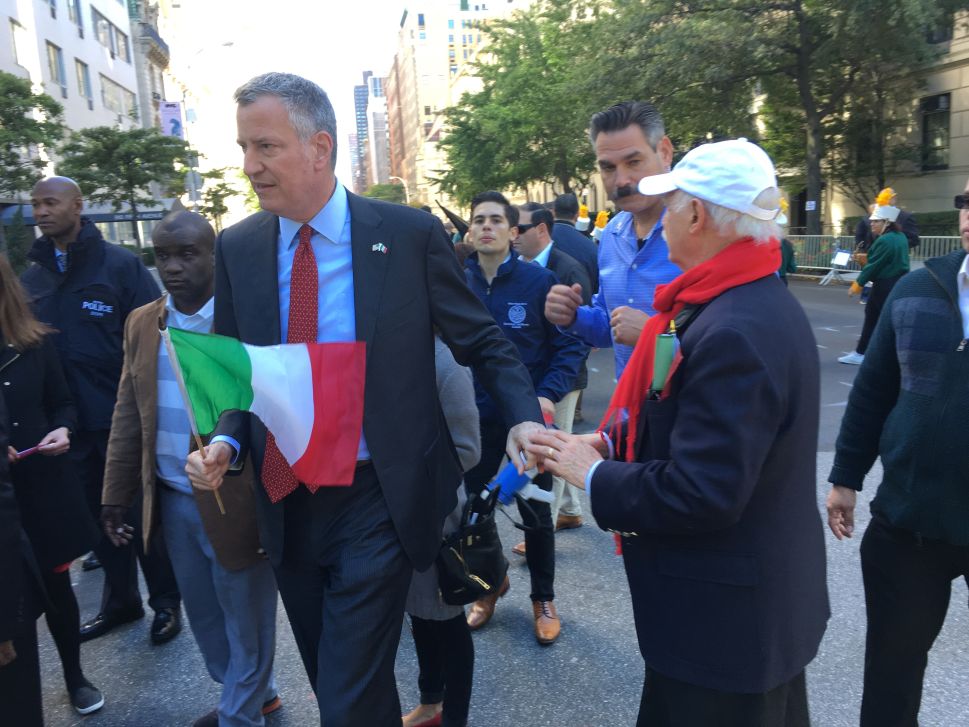