When superheroes team up, we get the chance to see how our favorite caped crusaders stack up against one another—not just in terms of how good they are in a fight, but how enjoyable, compelling, and dynamic they are to watch on our screens. For instance, the Avengers movies make it abundantly clear why Iron Man’s standalone movies are so successful, while, say, Thor’s are only moderately so. When they gather at Avengers Tower, Thor, for all of his awesome powers, backstory, and abs, starts to seem pretty stiff and ineffectual compared to the guy in the metal suit.

And so it is with the latest show from the good people at Marvel, Netflix’s highly anticipated Daredevil/Jessica Jones/Luke Cage/Iron Fist team-up, The Defenders. On the evidence of these eight episodes, I’m ready to call it: Netflix should jettison a bunch of these heroes and double down on Jessica Jones and its other female characters.

Let’s start with the obvious: The Immortal Iron Yawn. For those of us hoping that this year’s underwhelming first outing was a fluke of poorly judged politics and mediocre writing, The Defenders put such optimism to rest. Glowing hand or no, Danny Rand is the weakest link in this team-up, in more ways than one. Netflix wisely decided to set him apart from his teammates for much of the season, and gave us a valuable scene early on in which Luke lectures him on his white privilege, but that couldn’t stop him from dragging down the whole series.

Swinging between goggle-eyed and sanctimonious, Iron Fist adds little or nothing to any scene he’s in except his ability to buy a lot of stuff with his seemingly infinite fortune. By the time his adversary tricks him into punching the door he was supposed to keep closed, causing precisely the outcome he and his teammates needed to prevent, I was about ready to turn off my TV.

Matt Murdock doesn’t fare all that much better. The first season of Daredevil was excellent, but many suspected that this was primarily due to the magnificently understated performance of Vincent D’Onofrio as his main adversary. The uneven second season seemed to confirm this: The show sparked when Matt was up against Jon Bernthal’s Punisher but dragged when he battled the Hand or Elektra. Was it possible Daredevil himself just wasn’t that interesting?

Well, his image certainly suffers in The Defenders. On his own series, his Catholic guilt and conflicted morality are a central focus, and they are only as interesting insofar as they affect the story or become weaknesses that his enemies can exploit. Watching him go back and forth on whether what he is doing is right just isn’t that compelling. We already know that he’s a conflicted guy, so it doesn’t add any interest or complexity to see him go through it all again. And particularly so when he’s not even the sole focus of the show anymore. At the point when he decides to sacrifice himself for no purpose except apparently to save Elektra’s soul before they both die, I found it hard to be invested at all.

Similarly, Matt’s insistence on hiding his face and protecting his secret identity, while it made sense in the context of Daredevil, starts to seem downright goofy when he’s teaming up with three other heroes who are out there fighting evil under their own names. Yes, he wants to protect his friends and family, but so do they. His obsession with disguise appears more as theatrics than a necessity when he’s tying Jessica Jones’s scarf around his face.

Of course it is cynical, no-nonsense Jessica who points this out (as well as just how smug and annoying Danny is). Because she is, in many ways, the only accessible main character on The Defenders. It turns out it was no coincidence that her standalone show was the one with the most critical and popular acclaim; Jessica Jones emerges as the star of this particular team-up.

She’s the most interesting lead character on this show by miles. Krysten Ritter plays her with a lived-in and earned cynicism that’s not just a character beat, but is baked into her backstory and shows in every line and gesture. The pilot’s title, “The H Word,” is meant to signal that our protagonists are reluctant to assume the mantle of hero, but that applies more to Jessica than any of the others. She prefers not to make a display of her abilities and relies on her wits instead. On a show (or five shows) that too often devolves from interesting dialogue and plot development into tediously long scenes of choreographed kicking and punching, she is the one who remains verbally deft and intellectually engaged. So it’s not until late in the series that we realize she is likely the physically strongest of all of them, giving us the single best moment of the show: Danny Rand gasping in shock as she holds an entire elevator up by one arm.

I realize I have sidestepped Luke Cage here. And it’s true, he doesn’t have it quite as bad as Daredevil and Iron Fist in this team-up. Still, his own show, while unlike anything before it on TV, went on too long, and eventually revealed a bit of the problem with Luke’s stolid stoicism (which The Defenders further exposed). There is only so far the “I do good because good needs doing” persona can take us, narratively. Mike Colter is excellent in the role, but Luke is essentially an impassive guy, which doesn’t give the viewer a whole lot to work with.

We’ve also seen his reluctant hero storyline many times before, and seeing it play out here tends to follow familiar patterns. When lifted out of these masculine tropes, on the other hand, as in the case of Jessica Jones, we start to see something new.

In the same way, a cop who is torn between duty and morality, between doing things by the book and doing what he thinks is right—that story is old hat. But in the hands of Simone Missick as Misty Knight, it becomes something else. In part this is because the writers can’t simply fall back on the same cop templates, tied up as they are with the male hero-savior complex. You always know the male maverick cop is going to break the rules and possibly be celebrated for it. Misty, on the other hand, knows all too well that the rules are there for a reason, that bending them may be necessary, but it comes at a cost. Once they give this badass woman her bionic arm, she’s ripe for her own show. Cancel Iron Fist and give her one.

Sadly, though they were a duo in the comics, I don’t think Colleen Wing will work as her partner for a show. Her character is just not that interesting, and Jessica Henwick is wooden in the role. Instead, maybe she could team up with Rosario Dawson’s almost impossibly capable Claire Temple. Luke Cage could stay on as a supporting character.

Then we’ve got other amazing women waiting in the wings: Trish Walker as Hellcat, for instance, is a protagonist I’d rather watch than seeing Daredevil struggle internally and then decide to punch a bunch of people for another season. And while we’re at it, the upcoming Thor movie is introducing Tessa Thompson as Valkyrie. In the comics, Valkyrie is a central member of the Defenders, and she could serve to connect these characters to the greater MCU much more effectively than a few oblique references to “The Incident” that destroyed Midtown.

So that’s my proposal, Netflix: Get rid of these dead-weight shows with their one-note male protagonists and give us more complex and compelling female leads like Jessica Jones. We’ve seen the former so many times we can recite the character beats in our sleep; it’s time to show us something new. 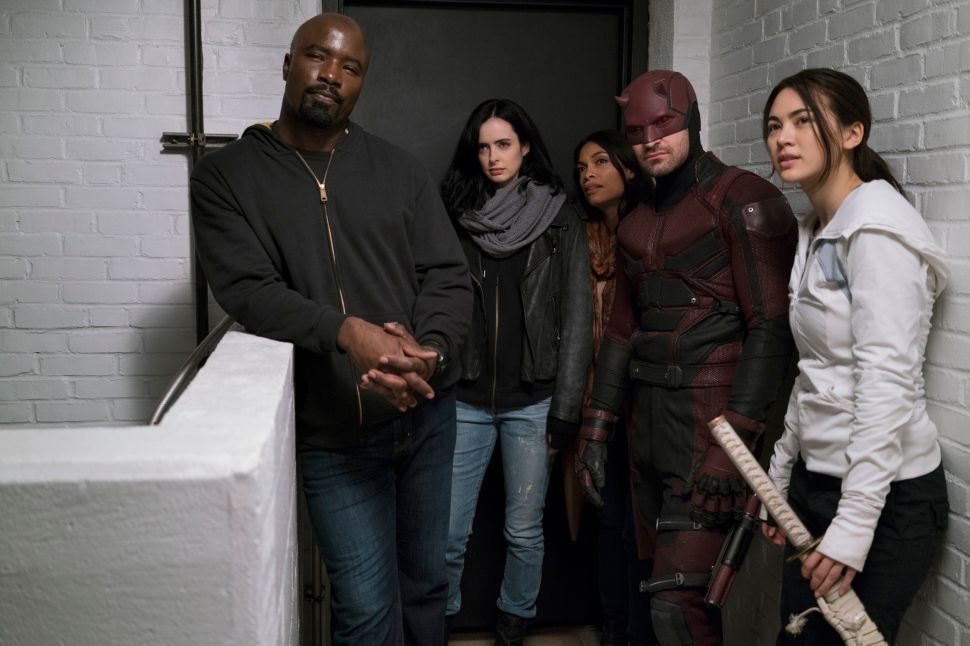