Since speculation arose that Sen. Kamala Harris is preparing to run for president, Hillary Clinton’s supporters have defended her using a strategy that was developed during the 2016 Democratic primaries against Sen. Bernie Sanders. This strategy revolves around the Bernie Bros narrative, which propagates the myth that Sanders supporters are sexist, racist white males. The fact that many of progressives’ criticisms, policies and grassroots efforts have been led and founded by women and people of color are, of course, ignored.

“Kamala Harris is one of the most progressive (and attacked) leaders in America,” claimed an article by former Hillary Clinton staffer Zerlina Maxwell for ShareBlue, an outlet predicated on propagating the “Vote Blue No Matter Who” sycophancy. The thesis of the article was reminiscent of former Clinton staffer Peter Daou’s defense of Hillary Clinton: “Hillary Clinton is one of the most ethical (and most lied about) political leaders in America.” Even though bullying voters into supporting Hillary Clinton failed in 2016, the Democratic establishment is doubling down on the tactic but substituting the candidate.

The Democratic establishment’s strategy of selecting candidates and throwing their support behind them treats primaries as nuisances. Primaries are meant to strengthen and grow political candidates and parties. It is undemocratic to imply that criticisms should be avoided to unite the party behind a particular candidate. The establishment’s Bernie Bros narrative blames Clinton’s loss on the left and propagates the assumption that no valid objections to an unvetted candidate exist.

The article made little effort to prove that Harris is progressive, and it even cited a recent bail reform bill she co-sponsored with prominent Republican Sen. Rand Paul. “No politician is perfect,” argues Maxwell.

These concerns were ignored in Maxwell’s article, but MSNBC’s Joy Reid, a proponent of the Bernie Bros myth invited her to come on to MSNBC to advertise her point. On Twitter, Reid conflated campaign donations categorized by employer with corporate donations and argued, “All candidates raise money from corporate donors,” which is false. It is illegal for corporations to donate directly to candidates, but the 2011 Citizen’s United ruling determined that Super PACs could accept unlimited donations from these entities.

“The role of a state attorney general is to act as the state’s premiere law enforcement officer, and in occupying this position, Harris was essentially enforcing the will of a racist and anti-poor state ‘justice’ system (the most populous state and one of the most expansive carceral states, at that). To pretend that only white men could possibly articulate a radical critique of this political track record and trajectory is wildly disingenuous,” wrote Zoe Samudzi for Verso Books in an article on the effects of deifying a politician. “As with Hillary Clinton, a gendered liberal rhetoric has emerged to defend Harris, claiming that she is being criticized because ‘leftist bros’ are resentful of and threatened by female political leadership. Liberal commentators continue to conflate the most vocal and visible contingent of Bernie Sanders supporters—’Bernie Bros’—with the entirety of the left and use this conflation to insist on dismissing ‘the left’ on the grounds of racism.”

Harris supporters use the Bernie Bros tactic to distract from criticisms of her record as California attorney general and the fact she has been courting wealthy Hillary Clinton donors in the Hamptons instead of working to win over voters. The Democratic establishment has decided she is a “rising star” worthy of supporting for a potential 2020 presidential bid even before she engages with voters throughout the nation. Change needs to come through policies that benefit voters, not through exploiting candidates’ race to subvert criticisms against their policies. 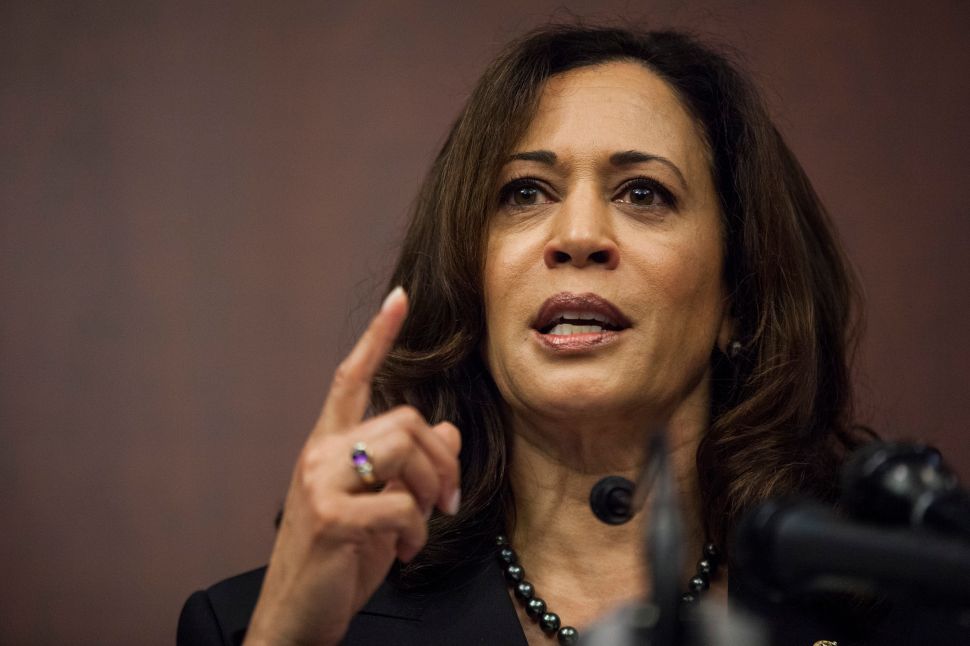