For all those Americans who supported Hillary Clinton, as I did, let me start by saying that I understand.

To say she was treated unfairly is the mother of all understatements. A 25-year campaign of character assassination, dating back to her role as the wife of a candidate in 1992, finally laid her low last November. The mainstream media, complicit in the Republican campaign of personal destruction against Clinton, spent so much time and innuendo on her nothingburger e-mail issue that, by the end of the campaign, even the mention of e-mails produced an instant, gut-level negative response against Clinton that even Pavlov might have found shocking.

Undoubtedly, Clinton’s shocking loss has been particularly scarring and galling for the women who supported her. Surely any woman who has been passed over for, paid less than, or disrespected by an unqualified man must feel a deep and all-too-familiar pain that I can never fully comprehend. Seeing her pilloried daily, even by many on the left, has inspired millions of her supporters to defend and protect her, even in the wake of her defeat. To the degree that it is possible for someone who has not lived the experience, I understand.

On the other hand, I didn’t support Sen. Bernie Sanders, but as someone who has passionately supported candidates who lost, I know how you feel. You believed in this man and thought he was the right person for the job, and it is difficult to accept that the majority of voters in the Democratic nomination contest did not embrace him as you did. Many of you believe he was somehow cheated or robbed. (I’m sorry, but if you believe that, you’re wrong. He wasn’t cheated. It’s undeniably true that the party establishment preferred Hillary Clinton, but there is a big difference between a few snarky internal e-mails and wholesale election fraud, and neither the Clinton campaign nor the Democratic National Committee defrauded Sanders and his supporters. She simply had more support within the party, which she built and accumulated over more than four decades in Democratic politics, and which Sanders, who has never been a Democrat, did not. It’s as simple as that.)

That said, I get it. It hurts when someone you believe in falls short. You wonder how others didn’t believe in him the same way you did. You cast about for reasons and explanations that make sense to you. You feel disappointment and anger toward those who thwarted your candidate. And for those of you who were new to politics, as many of his supporters were, his defeat was a new heartbreak you’ve never felt before.

I understand the pain and sorrow that supporters of both Clinton and Sanders feel, and I am not unsympathetic to your feelings.

But I am pleading with all of you for one thing, on which the future of the American left and, in my view, the nation itself, depends.

It’s long past time for those of us on the left to put the past in the rearview mirror and start working on the extremely serious problem we face right now.

In a nutshell, here is that problem: The Republican Party, as currently constituted, is an existential threat to American democracy. It is hell-bent on forcing a deeply unpopular agenda without having to suffer the consequences of its actions at the polls. If this party manages to win the 2018 and 2020 elections, it will have the opportunity to finish the job it started in the 2010 midterms: restricting access to the voting booth in a way that disenfranchises its opponents, continuing the gerrymandering that locks Democrats out of power in Congress and the state legislatures, and locking down the federal and state courts so that its election-rigging chicanery cannot be upended by judicial fiat. If Republicans achieve these aims, they will have unchecked rein to dismantle whatever is left of all the hard-won progress of the last century.

The longer we on the left continue to cling to our own sides of the Hillary-Bernie divide, the better the chances are for Republicans to permanently and decisively win their war against democracy and all the progressive gains won since the time of the Theodore Roosevelt’s presidency.

We face a greater threat than each other. While we fight an angry intramural battle—an ongoing, unending proxy war between the camps of two defeated candidates—we are in danger of losing our country as we know it and everything generations of progressives fought, bled and even died for.

Unfortunately, almost everything that happens now on the left is being viewed as another front in the Hillary vs. Bernie proxy war. Growing speculation about the potential presidential ambitions of Sen. Kamala Harris barely got out of the gate before Bernie supporters began tarring her as the “Clinton candidate.” You’ve barely had time to assess this new senator and you’re already putting a Team Hillary jersey on her? Please.

If we on the left continue to refight the battle of 2016 in every primary election across the country, our prospects for 2018 and 2020—two elections that will determine the fate of the Trump-Ryan-McConnell agenda, the courts, and redistricting through 2033 —are bleak.

We must stop looking backward. Hillary and Bernie had their chance. (Frankly, Hillary had two chances.) They both lost. Given the stakes, we can’t afford to lose again, and we most assuredly will if we on the left cannot unite against an enemy that means to turn the clock back a century or more and lock down this transformation by instituting permanent one-party control.

American democracy hangs in the balance. We on the left need to move forward, stop squabbling among ourselves, and figure out how to get together against a common foe. And the only way to do that is to let go of this Clinton-Sanders fight once and for all and focus on what unites us: saving our democracy.

In the 1930s and 1940s, supporters of Mao Zedong and Chiang Kai-Shek had enough sense to understand that they needed to save China from the Japanese first, and then fight it out over who would lead after defeating the Japanese. They put their civil war on hold and finished it later. If only American progressives could learn from this example.

The Hillary wing’s frustration with Bernie supporters who won’t join forces unless they get their way is understandable. However, its continued clinging to a defeated candidate who, fairly or not, was too damaged to lead us to victory and can’t help us move forward, is stubborn and shortsighted. And while the Bernie wing is absolutely correct that the Democratic Party’s roof is on fire, its response of “let it burn” is not a solution. The Democratic Party, with all its problems (chiefly an over-the-hill leadership and consultant class that has a generation-long history of losing more elections than they win), is nonetheless the only vehicle in place that can go toe-to-toe with the Republicans right now.

Our modern-day Rome is burning, and Republicans are roasting marshmallows in the flames. It’s up to the left to stop the fire, and we are fighting over who’s going to get front-row tickets to the fiddle concert. It’s time to put down our fists and pick up a hose. We can fight for the soul of the left later. Right now, we have to save our country, and we can’t do that if we are divided. 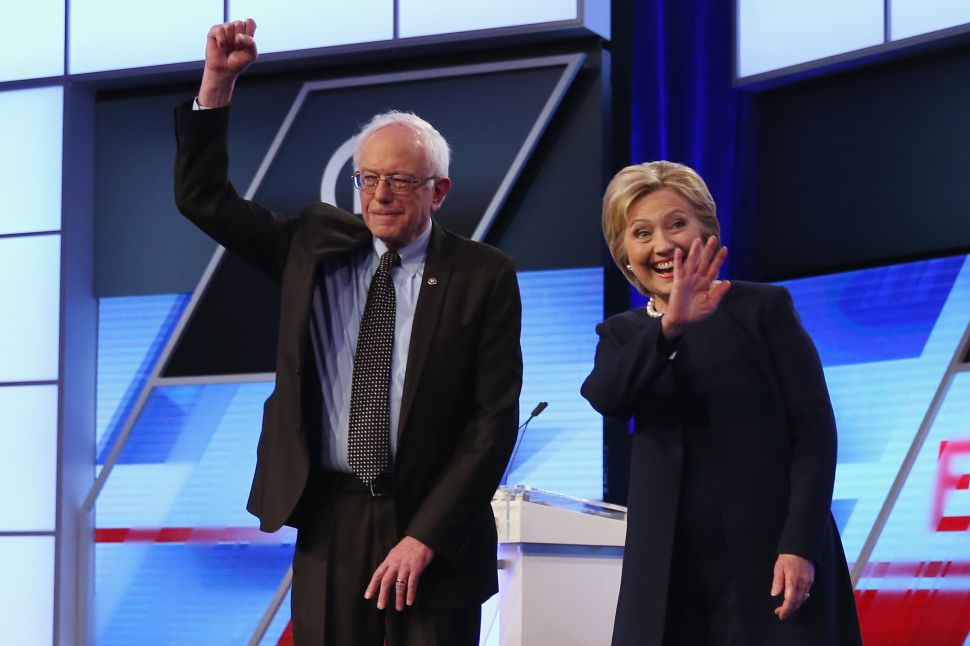