When is an opera not an opera? And, perhaps more to the point, when does something that’s not an opera become an opera? Answers to both these riddles were proposed during a sweltering and artistically subdued July.

The opera that didn’t quite make it was Dvorák’s Dimitrij, which runs through Sunday at Bard SummerScape’s Fisher Center for the Performing Arts in Annandale-on-Hudson. The 1882 piece offers a richly melodic meander through some highly fictionalized events in Russian history, when, to fill the power void created by the sudden death of Boris Godunov, the pretender Dimitrij and his scheming consort Marina made a grab for the Russian throne.

It’s based, at several removes, on a play by Friedrich Schiller, but as music dramas go, Dimitrij is no Don Carlos or Maria Stuarda. Dramaturgically the piece is lumpy—the high-camp villainess Marina just sort of wanders off, leaving the finale to hinge on whether Dimitrij’s mother’s decides to perjure herself. Meanwhile Dvorák’s music, though heavenly in small doses, turns cloying well before the nearly four-hour piece crawls to its finale.

Fortunately, though, the immense length of the piece gave the huge voices of the two leading singers time to warm up to impressive vibrance. The muscular, tireless tenor of Clay Hilley perfectly indicated Dimitrij’s fanatical determination, and Melissa Citro’s icy, wide-ranging soprano and to-the-hilt acting would give Evita Perón a run for her money.

If Olga Tolkmit’s colorful soprano was mostly wasted on the role of the mousy Princess Xenia (this work overindulges in the grand opera trope of virago vs. doormat), Joseph Barron and Peixin Chen both revealed world-class basses in supporting roles.

In Anne Bogart’s production, inexplicably updated to circa 1989, and Brian H. Scott’s single setting of a dowdy community hall, the geopolitical struggle between Russians and Poles was reduced to a rumble between bus-and-truck casts of Working Girl and Footloose. Music director Leon Botstein brought his familiar quality of pedantic precision to his leadership of the American Symphony Orchestra, though he seemed to lack that essential quality in conducting grand opera: the ability to make fine gradations in noisy music.

In a more traditional reading of this piece, the soloists—soprano Ambur Braid, countertenor Anthony Roth Costanzo and bass Davòne Tines—might fairly be criticized for occasional pitchiness and fudged coloratura, but in this context they were simply riveting. And the intimate performance space at National Sawdust was packed to the rafters, with glitterati like Justin Vivian Bond and James Ivory sitting shoulder-to-shoulder… and utterly transfixed. 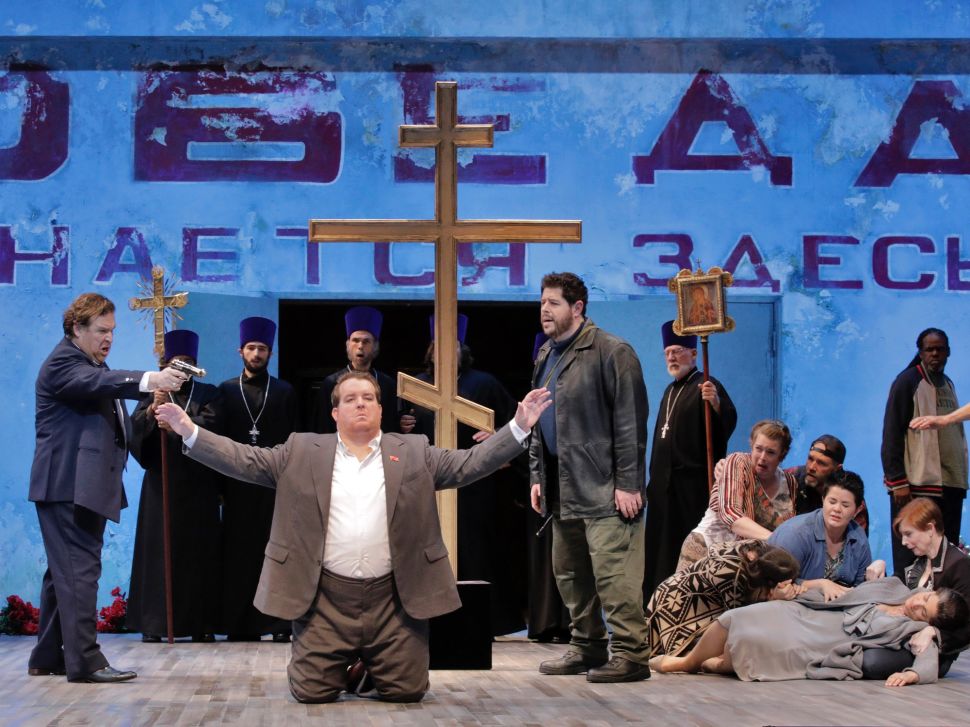