Known as “The Graveyard of Empires,” Afghanistan has a history of overcoming foreign invaders who underestimate the resilience of the residents. And President Donald Trump’s grand strategy to avoid joining this list of losers, which he unveiled last night, was unfortunately vague. Most expect a troop surge, but did the last U.S. soldier increase in Afghanistan work out?

As former CIA agent Milton Bearden explains, trying to subdue Afghanistan has historically been a fool’s errand. Alexander the Great had to make a rare order to retreat. The British suffered horrifying casualties during the first Anglo-Afghan War. And many credit the invasion of Afghanistan as the beginning of the end of the Soviet Union. Only Genghis Khan and Mughals seemed to make it through, but only after a painful price on Afghan terms.

America thought it would be different in 2001, when it quickly ousted the Taliban from power and had Osama bin Laden on the run. But now, 16 years later, the U.S. is still there. The Taliban is still in the field. They aren’t in control, but they hold key territories in the country. It’s a tough choice for thechief executive.

In 2016, candidate Donald Trump lambasted Obama’s Afghanistan policy, implying the U.S. wouldn’t be fighting such a war if he were elected and pointing out better ways to spend the money. But he’s surrounded himself with generals, all of whom don’t want to lose the war.

Will Trump send more troops? Or withdraw the remaining 8,400 troops? Is there a third option? In a primetime address, viewers received no specifics. The U.S. will kill terrorists instead of engaging in nation building. The U.S. won’t withdraw; it will win. Trump harped on his typical America first rhetoric. He did not mention a surge, operations or troop levels. He called on Pakistan to stop hosting terrorists and encouraged India to help in Afghanistan.

Trying to incorporate India was the only new element in the Trump administration’s Afghanistan policy. However, the slaughter of the British in the First Anglo-British War was accompanied by far more Sepoys from India being massacred on their retreat to Jalalabad, so India is likely to have little stomach for being bogged down in a quagmire with the country.

Despite the lack of specificity, many expect Defense Secretary Jim Mattis will have permission to send nearly 4,000 troops to Afghanistan, augmenting the remaining 8,800 soldiers there that are trying to train the Afghan Army.

Obviously, America’s war with Afghanistan has not gone well. A report to Congress showed that the Afghan government controls about 15 percent less territory than it did a year ago. And while the Afghan National Army is bigger and perhaps stronger than it was a year ago, U.S. military, Afghan military and civilian casualties are on the rise. In fact, years ago, General John Kelly, Trump’s now chief of staff, lost a son in the Afghan War. But will a surge in American troops stop the Taliban’s momentum?

One of my students, who served in Afghanistan, had this to say about the proposed increase in troop levels: “Did this tactic work for the past presidents who led during the war on terror?” And there is a way to answer this question, starting with Obama’s 2009 surge in Afghanistan.

According to Spencer Ackerman with Wired.com, the U.S. military quietly came up with a report card based on a series of benchmarks that resulted in an “F” for the surge, at least according to the headlines, which would seem to indicate the mission was a failure. A closer examination of the report revealed more nuanced conclusions: the inclusion of additional variables show that there were either fewer attacks, a slight increase in these attacks, or numbers that reflected pre-surge Afghanistan, based on how attacks are classified. There were fewer civilian casualties from Americans and their allies. In public statements, U.S. officials were more supportive of the surge results. Regardless of the grade, the Obama surge did not significantly improve the situation.

Is there a solution? Another Afghan veteran from my past classes suggested this: “My strategy is simple. Keep the battlefield outside of the USA at all costs. Make it a permanent duty station like Korea or Germany. I had the same idea for Iraq. There were fighters from all over the world traveling to Iraq and Afghanistan to help fight against the invading infidels. When we started pulling all troops from Iraq, chaos began and Europe now sees repeated attacks from ISIS and al-Qaeda who would have traveled to Iraq to fight 10 years ago. The goal in the fight against terrorism is to prevent terror attacks on U.S. soil.”

Clearly, the concern is the wide variations of troop levels, when perhaps the boots on the ground seek direction and a little consistency. Or it involves more of a role for the generals, less input from whoever the president is, and deployments not dictated by election schedules. 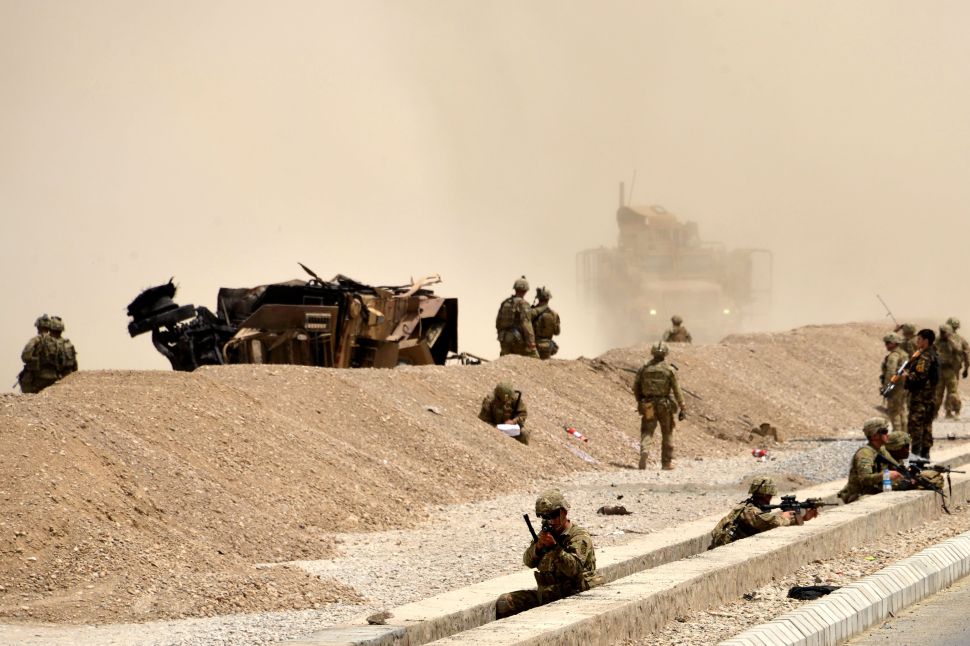