We’re officially losing the propaganda war with Russia. This isn’t entirely news. Two years ago, I explained how the Obama administration, facing a deluge of Kremlin lies aimed at the West, refused to fight back. This shirking of battle in the propaganda war that Vladimir Putin is waging against America and our allies may be the most consequential what-if of our 2016 election.

Hillary Clinton’s backers have pointed questions about why a Democratic administration proved so timid about resisting the Kremlin’s weaponized lie machine—as well they should. Recently, more troubling questions have emerged about why the Trump White House is even more derelict than its predecessor about this important national security matter.

In response to Russian clandestine interference in our 2016 election—a spy campaign in which disinformation and Active Measures, to use proper Chekist terminology, played a pivotal role in harming the Democrats and helping Donald Trump—late last year Congress passed and the Obama White House signed a bill giving the State Department $80 million to resist Russian lies aimed at the West.

This, therefore, was the law of the land when Trump took his oath of office a few weeks later, but, as I recently explained, in the more than half a year since, absolutely nothing has been done to follow the law. The State Department has hired nobody, created no new programs or organizations, and has not spent a dollar of the $80 million Congress gave it for this new and important mission. All this while our Western allies actually are doing something in the fight against the Kremlin’s lie machine.

Despite repeated inquiries from Congress, Secretary of State Rex Tillerson and his department have refused to take action and follow the law. Why this is happening has been answered by a new piece in Politico that explains the reason is more sinister than bureaucratic inertia or lethargy in Foggy Bottom. Some wondered if this failure was caused by the unprecedented chaos at the State Department that Tillerson has engendered—including not filling key jobs, disregarding advice from in-house experts, and seeming to despise his own department, which he apparently wants to all but disband, on White House orders.

While the present degree of dysfunction in Foggy Bottom would be difficult to overstate, thanks to Trump’s leadership team, the full truth is even more unpleasant. Tillerson flatly refuses to take action against Moscow and push back on the noxious disinformation that undermines our democracy. According to Politico, a top Tillerson aide “suggested the money is unwelcome because any extra funding for programs to counter Russian media influence would anger Moscow.”

In other words, Tillerson won’t follow U.S. law because it might upset the Kremlin. Notwithstanding that it’s Moscow’s misconduct that is the cause of all this. The funds appropriated by Congress expire at the end of fiscal year 2017, which is less than two months away now. Senators and Representatives ought to have urgent questions about why the executive branch isn’t following the law here.

Unwilling to resist Russian disinformation, the Trump administration instead has enthusiastically embraced such unpleasant espionage techniques, aiming them at fellow Americans for Team Trump’s political benefit. Months ago, I explained how Kremlin-made lies had a habit of winding up on Fox News—the president’s preferred media outlet—before being parroted by the White House itself. This Moscow-created disinformation chain, replete with lies about America’s “deep state” and its alleged plots against the administration, has become a staple on Trump-friendly media at Fox News and beyond.

The pupil is clearly learning: The Trump administration has started employing Chekist-style disinformation to protect itself from the increasingly serious KremlinGate investigation. An unpleasantly illustrative case that has just come to light is that of Seth Rich, a 27-year-old Democratic National Committee staffer who was murdered in Washington, D.C. in July 2016. His killing remains unsolved; there has never been any reason to think it was anything more than a tragic, random late-night shooting of the kind that happens in our nation’s capital more often than it should.

Nevertheless, for nearly a year, pro-Trump mouthpieces have parroted a fact-free conspiracy theory that Rich—not Russia’s intelligence services—was the “real” source of the purloined DNC emails that were disseminated in the summer of 2016 by Wikileaks, to Hillary Clinton’s detriment. Julian Assange has repeatedly hinted that Rich was his source and that the young man was assassinated by a vengeful Clintonian hit-team, without offering any evidence.

Which he can’t, because there isn’t any. This is just another absurd lie broadcast by a well-known Kremlin front, albeit a particularly nasty one that has tortured the grieving young man’s family. The story doesn’t end there, however. Fox News, too, gleefully parroted Assange’s lie. Here a preeminent role was played by Sean Hannity, a Fox News star plus a friend of Assange’s, who in mid-May broadcast fact-free assertions about Seth Rich and his alleged role in leaking DNC emails.

Rich’s enraged family denounced Hannity and threatened legal action, leading Fox News to take the rare step of retracting Hannity’s fabricated “bombshell” story. Yet the damage was done, and this became yet another case of Kremlin-backed disinformation transforming into a pro-Trump trope on the right-wing, despite there being zero evidence for its veracity. It should be noted that Moscow played a direct role in creating and spreading this noxious Rich mythology. Sputnik, the Kremlin propaganda website, actually cashiered one of its American reporters when he refused to go along with an obvious lie about the murdered young man.

It now turns out that Fox News, too, was complicit in spreading lies about Seth Rich to aid the White House. As reported by NPR, a lawsuit filed by Rod Wheeler, a former cop and sometime Fox News contributor, against the right-wing media giant, alleges that the network consciously spread lies about Seth Rich to help the president deflect attention from the Russia scandal—and that the White House was directly involved in this conspiracy to deceive the public.

According to Wheeler, he was “recruited” by Ed Butowsky, a wealthy Texas investor who’s close to Team Trump, to fabricate a coherent (if utterly false) narrative about Rich’s murder to take the heat of KremlinGate off the increasingly worried White House. This effort included invented quotes about the case from a Fox News reporter. Most importantly, Trump himself reviewed the draft of Hannity’s subsequently discredited “bombshell” before it went live.

This allegation, if true, places the White House at the center of a very Russian-style Active Measure to deceive the American public. This means Donald Trump will resort to truly grand deceptions to deflect attention from his ties to Moscow, leading to obvious questions about what’s so important that the president needs to hide here.

The White House is keeping mum about the Wheeler lawsuit and, significantly, so is Sean Hannity. None of this speaks to their innocence regarding Wheeler’s shocking allegations. It’s bad enough that Team Trump flatly refuses to follow the law and push back against Kremlin lies. It’s considerably worse if the White House is employing Putinesque disinformation to deceive the American public too. 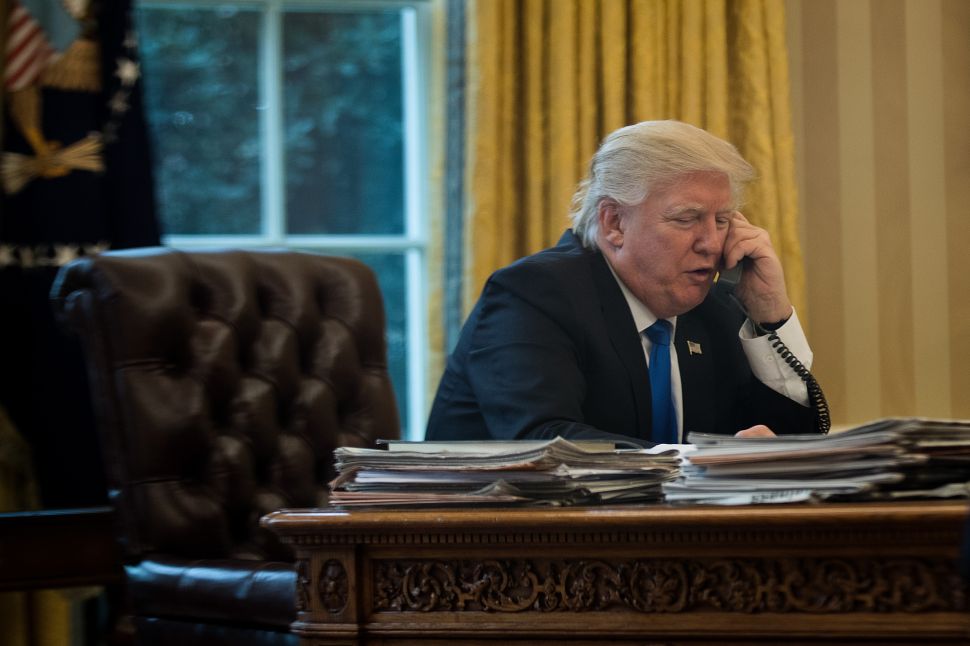