In March of this year, the Trump foreign policy team of Secretary of State Rex Tillerson, Secretary of Defense Jim Mattis, and the Tweeter-in-Chief himself began a coordinated attack on Kim Jong-un’s regime, with the interim goals of disrupting its political and military plans, psychologically rattling its leaders, and exposing the regime’s grave weaknesses. The ultimate goal was to set conditions for achieving the long-range goal: denuclearizing the Korean peninsula.

The great Chinese strategist Sun Tzu said that the best strategy is to attack the enemy’s plans. With a soldier-scholar like Jim Mattis in the Trump administration, a stroke or two of Sun Tzu should surprise no one.

As a result, the Trump team is taking diplomatic, economic and military actions—not drawing feckless rhetorical red lines. Its actions are seizing the initiative, limiting the enemy’s options, and exploiting the enemy’s weakness. These actions are designed to force the thugs in Pyongyang to ditch their nuclear weapons and quietly rot within the starving confines of their Communist gulag.

We aren’t engaged in a game. This is the latest phase of the Korean War. Though war is not a sport, some sports analogies are instructive. Basketball’s full-court press is a defensive attack on the offense’s “plan” to score—which would be a sportscaster’s description of the Trump administration’s North Korea policy. In basketball, teams employ a relentless full-court press to degrade an opponent’s ability to move the ball, deny easy shot attempts, and disrupt shots the opponent takes. “Pressing” teams try to force their opponents to make mistakes that lead to turnovers. A sustained press that forces mistakes dispirits an opponent.

The U.S. can do more than run an aggressive defense. America, when it decides to use it, has the premier global offense. North Korea cannot “press” American power; it can only provoke it.

And it has provoked America to the point that Trump is promising fire and fury.

Employing diplomacy, economic power, military power and information power (the ability to gather and communicate intelligence) in concert is a geo-strategic full-court press.

The acronym for the four elements of geo-strategic power is DIME: “Diplomatic,” “Information,” “Military” and “Economic” power. Coordinating these elements creates a synergistic force whose sum is greater than its parts. I explained this to an eighth grade history class and the kids got it. Diplomacy was my index finger, Information the middle finger, Military the ring finger, and Economic power the little finger. Individually, the fingers poke, but together they form a fist.

I showed the kids my fist and threw a punch in the air. I told them that in other circumstances this wasn’t a weapon but a grip on a tool. They got that, too.

Unfortunately, coordinating the elements of power is very difficult. The U.S. government’s civilian agencies don’t play well together—protecting their budgets and their political turf in the Washington swamp is their first priority. So in the field the military does it all ad hoc. Company, field grade and general officers become diplomats in helmets. Combat engineers are developmental aid experts.

Yet the Trump administration is using all elements of power in a coordinated effort to denuclearize the Korean peninsula.

Start with the D for Diplomacy. The U.S. has forged a solid alliance committed to Korean denuclearization. The U.S., Japan, South Korea and Australia are the principle front line nations, but western European nations and key members of the Association of Southeast Asian Nations (ASEAN) add economic and political weight. India is in the background. China is the man in middle, and it knows India is in the background.

All of the east and southeast Asian nations have a common security interest in denuclearization: They are already in range of North Korean missiles.

U.S. diplomats have also succeeded in getting the UN to impose harsh economic and political sanctions on North Korea.

I for Information began in earnest with Tillerson’s declaration that the era of strategic patience with the Kim regime is over. Trump’s threats of fury and fire mock Kim Jong-un. Yes, Trump outraged the pearl-clutchers in the American foreign policy establishment. American presidents aren’t supposed to talk like that!

Except they do. Take Harry Truman for example.

The theater of threat is a key element in North Korea’s intimidation and extortion routine. Trump’s fiery threat pushed Kim Jong-un off center stage. Now Trump has the rhetorical threat initiative, not the fat kid.

Trump also has a track record for following through on a threat. In April, he punished Syrian President Bashir al-Assad for using chemical weapons. Trump isn’t seeking a legacy like Bill Clinton; he isn’t bogged down in Iraq like George Bush; and he isn’t a faculty lounge poseur like Barack Obama touting red lines then failing to back words with deeds. Trump has demonstrated that he will act. That’s important information from the bad cop.

This information is a suavely packaged threat from the good cops: National Security Adviser Lieutenant General H.R. McMaster told ABC News “…We are not closer to war than a week ago, but we are closer to war than we were a decade ago.”

This information adds spine to the bad cop and good cops’ coercive diplomacy: Pyongyang’s insistent violation of previous deals and arrangements has left Washington, Tokyo and Seoul with nil interest in conceding anything to the dictatorship, but particularly on the issues of nuclear weapons and ballistic missiles.

M for Military: The U.S. and its allies have massive and modern forces. They are full spectrum forces employing everything from the bayonet to ballistic missiles, anti-ballistic missiles and cyber weapons. South Korea’s ground forces are highly-trained and well led. Japan has quietly developed offensive strike capabilities. The allies have deployed a missile defense “thin shield” that is capable of shooting down a volley of North Korean IRBMs. Trump would use the entire arsenal if he had to, and China knows this.

E is for Economic, meaning sanctions and financial restrictions. However, the most pertinent policy tool can be summarized in a tweet. Recall that Trump indicated China would have a better trade deal if it helped curb North Korea.

How is the Trump team managing to pull it off? Here’s my guess: Trump and Tillerson aren’t from the D.C. swamp. Mattis was a combat soldier who also served as a diplomat with a helmet.

America wants China to add additional pressure. It believes China has the power to squeeze the nukes out of North Korea.

But China has its own interests—some of which conflict with U.S. interests. For example, U.S. and Chinese interests conflict in the South China Sea. On August 7, the U.S., Australia and Japan urged ASEAN to create a “South China Sea code of conduct” defining rules for resolving disputes in the region that are “legally binding, meaningful, effective, and consistent with international law.” The three nations emphasized their “strong opposition to coercive unilateral actions,” which is a direct slap at Beijing. It appears the deal being offered does not demand that China withdraw from its man-made islets.

China knows it can ill-afford a trade war with the U.S., Japan and Europe. This code of conduct amounts to a “semi-win-win” if everyone in the region agrees to it and lives by it. It is an example of coordinated diplomacy to encourage China to help denuclearize North Korea—and help itself economically and politically.

North Korea has blinked, but the sensationalist mainstream media, from The New York Times to CNN, have missed it.

But the sharp minds at 38north.org didn’t. They reported, “Anyone familiar with the North’s statements knows that over the past month there has been a major shift in Pyongyang’s formulation about negotiating.”

Yet CNN quoted North Korean Foreign Minister Ri Yong Ho as saying “…We will, under no circumstances, put the nukes and ballistic rockets on the negotiating table…”

“Unless the hostile policy and nuclear threat of the U.S. against the D.P.R.K. are fundamentally eliminated, we, under no circumstances, will put the nukes and ballistic rockets on the negotiating table and will not flinch even an inch away from our path of strengthening of the nuclear forces, which is chosen by ourselves.”

To interpret Pyongyang’s statement as the “we just might talk about getting rid of the nukes” signal it is requires that the interpreter possess certain skills.  The interpreter must know the relevant history, have common sense (a skill related to historical knowledge), pay close attention to current developments, and maintain an open mind free of ideological and emotional-political distortion. Unfortunately, the contemporary U.S. mainstream media fall short in all four skill sets.

Japan announced it may intercept the North Korean missiles with anti-ballistic missiles.

But here’s the big news: now China is warning North Korea that it’s on its own “if it launches missiles threatening U.S. soil and there is retaliation…” China, however, “would intervene if Washington strikes first. ”

China is clearly separating itself from the Kim regime and saying it will not defend North Korea if North Korea attacks U.S. territory. China is no longer North Korea’s shield.

Did Trump’s in-your-face provoke Kim into a rhetorical threat that went too far, one that led to the Chinese warning? Fair question to ask.

When you read or hear so-called experts argue it’s too late to stop North Korea from obtaining operational nuclear weapons—turn the channel or cancel your subscription. The suits are spewing tripe.

Blinking is a good sign, but it isn’t retreat.

In an article that appeared in The Observer on July 11, I sketched the administration’s six options for courses of action.

In the last month, we’ve seen Option 1 (another “do the right thing” bid to Beijing) pursued with a stroke or two from Option 2 (coercive diplomacy directed at China).

The interim results have reduced but not eliminated the need for Option 6 (delayed reprisal and the war to denuclearize).

However, the threat to Guam increases the probability the Trump administration will employ Option 4:

“Return of serve. This is an operation that could support several diplomatic options. The U.S., South Korea and Japan could use their ABMs to intercept every North Korean test launch. They might also employ cyber warfare to disrupt tests (perhaps they have already done so). The objective of ‘Return of Serve’ is to stymie the test program and embarrass Kim Jong-un.“

Get in his face and block his shots. Pressure basketball? No, pressure diplomacy to stop a nuclear war. 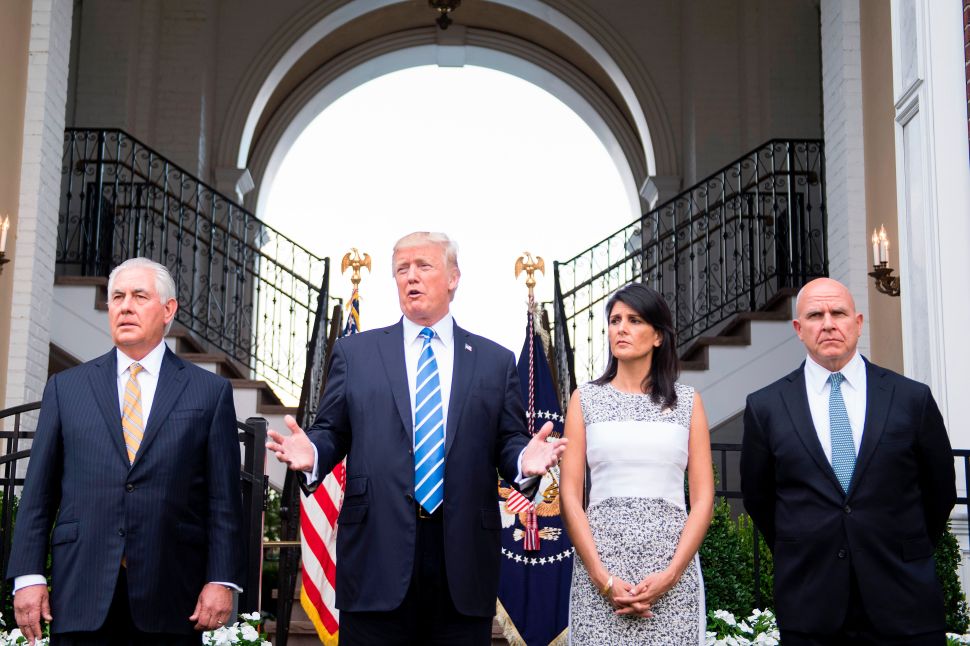