Russia’s descent into mayhem over a long 19th century can be seen in intellectuals and revolutionaries, including Leo Tolstoy and Vladimir Lenin, using the phrase “What is to be done?” throughout the long decline.

The phrase comes from the book of Luke in which John the Baptist told a crowd, “The ax is already at the root of the trees, and every tree that does not produce good fruit will be cut down and thrown into the fire.”

And the crowd asked John: “What is to be done?”

Americans might see our present condition in the same light: The tree may still appear healthy, but the ax is already at the roots.

This might explain the U.S. during Donald Trump’s presidency.

There are still hopefuls in the mainstream press that believe it will all go away. It may, but I don’t think so. It will take more than a magic act by Bobby Three Sticks—the FBI’s pet name for Special Counsel Robert Swan Mueller III—which in itself falls into the false thinking of this being a repeat of Watergate that will soon be resolved overnight. I doubt it.

We have come to the end of everything and now a new beginning.

But there is no precedent and no path for action. The old ways no longer work, and many repeat William Butler Yeats’s observation about Europe almost a century ago: “The centre cannot hold.”

We may be in the early phases of a transformation that will take place over the next 50 or so years—a future from which there will be no turning back because the roots will be cut through by then and the old trees will have fallen.

First acts of a president are important because they suggest what lies ahead. Trump’s pardon of Sheriff Joe Arpaio takes us to the threshold.

“If the president can employ the pardon power to circumvent constitutional protections of liberty, there is very little left of the constitutional checks on presidential power,” reads an opinion piece entitled “A Pardon for Arpaio would put Trump in Uncharted Territory” in The New York Times by Martin H. Redish.

But this is not exactly “uncharted territory.” Presidents have done things like this all along. It is constitutionally sanctioned, but it shouldn’t be.

The Arpaio pardon turned a miscreant Arizona sheriff into a freedom fighter. Trump could now, if he so desired, pardon all friends along the way. He could pardon anyone and everyone—including those Mueller might find guilty of political misdeeds. There is nothing to stop him or other presidents. He, or they, could pardon anybody, even themselves, it has been suggested. And then there is Marc Rich.

As the New York Daily News reports, “On his last day in office, Bill Clinton pardoned his troubled half-brother, Roger Clinton, for cocaine possession. He also pardoned financier Marc Rich, who had fled the country after his indictment for evading more than $48 million in taxes. Rich’s ex-wife, Denise, had made large donations to the Clintons and the Democratic Party.”

And did somebody say Richard Nixon?

We will begin to know by the end of September if Trump is to have his presidency. The Arpaio pardon suggests a transition ahead similar to that of Germany in the 1800s and the rise of Otto von Bismarck, chancellor of the German Empire. And so does his language and the language of his followers.

Our age has yielded dramatically to the new idea of family sentiment replacing reasoned political positions and parties and the unfortunate rise instead of dynasties, most notably with the Kennedy, Clinton and Bush clans. In politics, precedent is everything and surely anyone with big money today enters politics with fair hopes of children, cousins, aunties, wives and family hangers-on extending legacy. Surely Trump does.

With such a precedent today, it is not impossible to see ahead, to paraphrase Sabato, “The Trump half century.” Look to the rise then of Ivanka, the White Empress, to the next cycle of extended rule in the land of the free.

What Trump desires and what the Arpaio pardon suggests is to give the president the last word. In our configuration of a constitutional democracy the Supreme Court has the final say.

Maybe neither should fit our American future.

Texas Governor Greg Abbott offers a different approach. Last year, he proposed a Convention of States and offered “nine constitutional amendments to rein in the federal government and restore the balance of power between the States and the United States.”

That’s the one that separates the sheep from the goats. It removes ultimate power from the presidency and the Supreme Court and returns it to the states and regions. If we had that today, Arpaio would be in jail.

Possibly Abbott’s project provides a more suitable model for America a couple of hundred years from now, one better suited to 50 states with 331.1 million people spreading from the Atlantic to the Pacific, rather than the one written for 2.5 million in 13 states clustered together in the Europeanized East.

Thomas Jefferson proposed a rethinking of the original principles every 20 years. A professional business model might have found needed changes to the original document more than a century ago. It may well be because we have kicked the can down the road these long centuries that today demagogues are able to find their way to the Oval Office with nothing but a gleaming Hollywood smile and a bag full of cash. 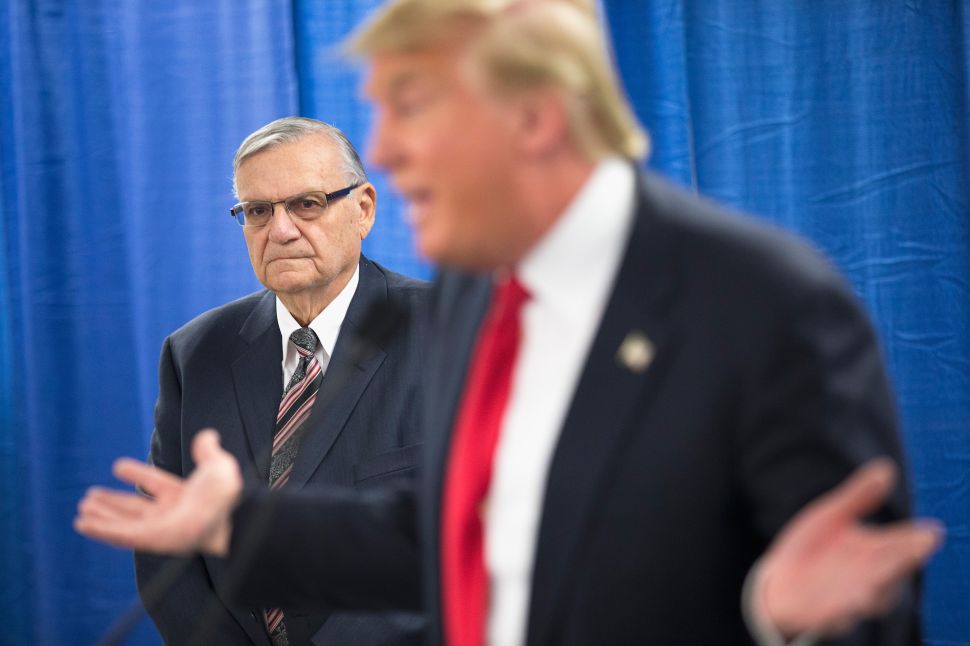