After speaking for more than an hour Tuesday night, amateur President Donald Trump still wasn’t done bloviating about the news media and the Washington swamp where he is King Crocodile.

“Most people think I’m crazy to have done this,” said the 71-year-old, orange-faced, yellow-haired chief executive. “And I think they’re right!”

His supporters cheered. How kind he is to them to “Drain that swamp!” as they demanded Tuesday. And, at last, we now have a word that can be used by all sides—and there are many, many sides.

That word is “crazy.”

Trump used it himself Tuesday. And Rick Wilson, a Republican strategist who appeared on CNN after the controversial rally in downtown Phoenix, agreed.

“This was a Castro-esque speech,” Wilson said. “It was an astounding chain of lies tied together by lunatic asides by a man who obviously is mentally unstable.”

Wilson added that Trump acted like both a “whiny six-year-old” and a “cranky old man” and that he is “bat-crap crazy” for putting on “an astounding moment in our history.”

Trump showed up over the objection of the Democratic mayor and despite a boycott by Arizona’s Republican governor and two Republican U.S. Senators.

CNN carried the speech live, as did Fox News Channel. MSNBC showed images of it on screen but carried the regular programming of The Last Word with Lawrence O’Donnell. Much of Trump’s long harangue disparaged CNN and “fake news” and the “crooked media,” but there was more to his media critique.

Honest Don lied about so many things, and not just the honesty of Sean Hannity, whose hour Trump stole Tuesday, the second consecutive night in which he has barged into prime time. Trump also remembered to plug his friendly friends at Fox & Friends. He watches all the time, he said.

Trump tried to change the national discussion from his troubling support for the racists and white supremacists who demonstrated almost two weeks ago in Charlottesville, Va. Trump said a week ago in his Manhattan castle that “many fine people” were among the Nazis and Ku Klux Klan members, but he forgot about all that Tuesday because that was just Fake News no matter what he said.

Trump, in his Hannity tone of voice—(Did you know they talk often?)—made a lengthy digression, a stream-of-consciousness, “we’re-the-real-victims-here” riff that seemed rambling by even Trump’s own diminished standards.

“They are trying to take away our history and our heritage,” Trump said.

(A digression here. “Heritage” is the dog-whistle buzz word of the moment. “Heritage” refers to our “Dixo-American cultural heritage,” which really means “Confederate,” which means “slavery,” which means “I’m a 2017 racist, wink-wink, nudge-nudge, thanks for your votes.”)

Several times, Trump lied about a small crowd protesting outside (television cameras showed a lot of folks with cops holding them back). He made sure to mention “radical Islamic terrorists” a couple of times, and he talked about Mexicans and drugs.

He led his chanting crowd into his Best of 2016 Greatest Hits like “Drain That Swamp!” and “Build That Wall!” and “Lock Her Up!” And he ended the speech with the recording of “You Can’t Always Get What You Want” by the Rolling Stones, a song they long-ago asked him not to use. (“…Practiced at the art of deception…”)

Unlike in Charlottesville—where a racist ran down and killed a woman with his car—Trump’s supporters in Phoenix Tuesday did not wear swastikas or white sheets, at least none near the TV cameras. Nor did they carry torches. But we already know Trump has those people in his back pocket (or in his grubby little fingers).

No, he holds these loud, vengeful rallies on prime time TV before respectable-looking folks to remind his “enemies” (and there are many, many, of them, this I can tell you) that he doesn’t need 51 percent favorability in the polls—not when his 33 percent includes enough ugly people who will support him with torches in one fist and their Second Amendment “rights” in the other as they march down streets.

Those regular-looking people in the arena in Phoenix Tuesday? Gosh, darn, them good folks’ll be the ones cheering Trump’s “rough, tough” guys as they go by chanting “Jews will not replace us!” as they did in Charlottesville.

The night before, Trump spoke to soldiers in Virginia. A couple weeks before that, he spoke on Long Island to cops in uniform. They were white cops wearing white gloves and they chuckled when he joked that they should abuse arrested persons—bash their heads while putting them in the cop cars—even before they are charged, tried, convicted and sentenced.

Trump likes men (and maybe some women, too) in uniform. Several of his closest aides are men who answer to the word “general.” To show off his cop chops Tuesday, he hinted broadly that he will soon issue a pardon for Sheriff Joe Arpaio, the Arizona lawman convicted of criminal contempt of court for pursuing a racist crackdown against Mexicans. Of course, Trump spoke up Tuesday for “law and order.”

Pundits on CNN and elsewhere might say Trump is an incompetent fraud, a grifter, a con artist and a liar, and maybe crazy too, but they’d better not ignore one big thing: Trump is a brilliant demagogue who has mastered the use of television.

And Don Lemon is good at it too. When Lemon opened CNN’s post-game show, you could see the fear in his face.

“A total eclipse of the facts,” Lemon said of Trump’s speech. “He lied directly to the American people… He’s unhinged. It’s embarrassing… Without thought. Without reason. Devoid of facts… What in the world is going on?” 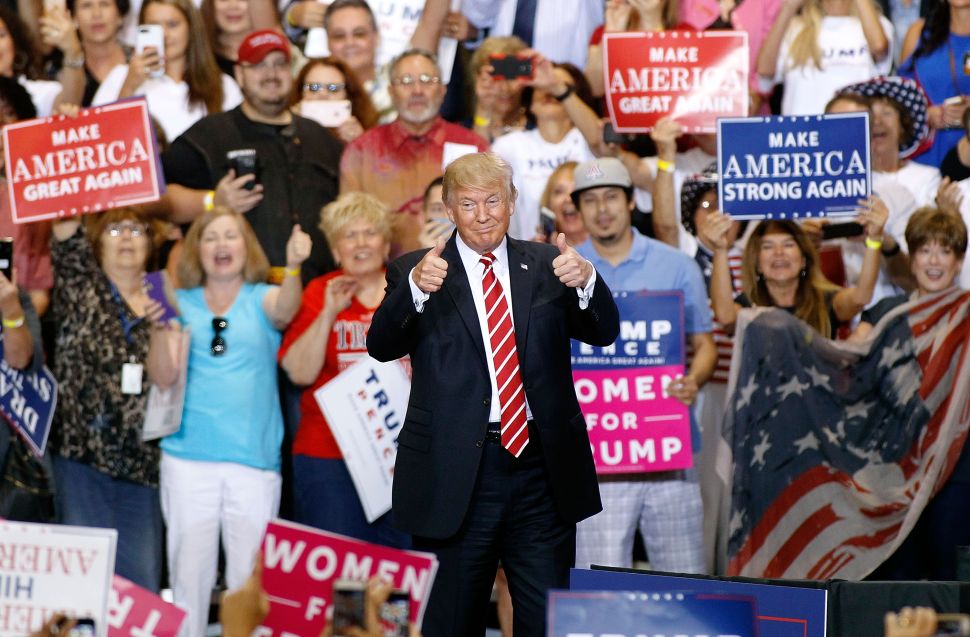