Since his departure from the White House, the media has described Steve Bannon as a favorite of Donald Trump’s conservative base. The media picking conservative favorites, though, is sort of like when your parents bought you an album for your birthday. It was always conventional top 40 favorites, and it was never the band you really liked.

The media understands conservative favorites about as well as parents understood musical tastes back in the day. They think they’re hip to the lingo—but they’re not.

Most conservatives hadn’t heard of Steve Bannon until he associated himself with Trump, who was by then dominating the news cycle. Before that, Bannon was executive chairman of Breitbart News.

It is an occupational conceit of the media to believe that people are influenced by those who purvey news and opinion. There is no way, though, that tens of millions of ordinary Americans were attracted to Trump by reading 700-word essays about trade and immigration on Breitbart.

No, people liked Trump because… how to explain? It’s like the movie One Flew Over The Cuckoo’s Nest. Trump is the McMurphy character. People like Trump for hassling Nurse Ratchet at medication time.

By 2016, outside the media enclaves of New York and Washington, the federal government had taken on the feel of a medication dispensary at a mental institution. It even had its own Nurse Ratchet-ian figure—Kathleen Sebelius—who was telling everyone in the rigid, humorless way of a career bureaucrat what insurance to buy, what medicines to take, and when to take them.

There was only one McMurphy candidate among the contenders for the presidency. Trump’s Twitter audacity was a strength, a demonstration that he would not be deterred by phony outrage. Breitbart may have occasionally helped Trump, but it is a chicken and egg scenario. The disaffected caused Breitbart; Breitbart did not cause the disaffected.

Trump voters are—although they are never portrayed this way in late night comedy sketches—independent thinkers not beholden to the forms and fashions that are beamed through televisions and computers.

They are employed, often under difficult circumstances, in occupations in which they can easily come to believe that the game is fixed against them with onerous regulations and the like.

The Trump voter who runs the logo stenciling business near the Pennsylvania Turnpike succeeds with wit and guile that those who gain power and prestige from the consent of a staid establishment are not capable of. He, and every member of his family right down to the sixth grader who helps with inventory on Saturdays, can use Quickbooks.

It is mildly ironic, then, that the lemmings who parrot the pieties of the dominant culture cast Trump voters as the ones whose minds are controlled, this week by Steve Bannon. They are the easily deluded ones, even by the standards of science they claim as their own.

Consider that there is more evidence of God (e.g. the design of the universe) than there is of Russian collusion with Trump to steal the election, which CNN decrees as a tenet of faith. The Russia story is the opiate of the masses. Those who believe it are the babushka wearing old ladies lighting candles and seeking deliverance, in this case from the results of an election.

Despite their pretensions, the “we’re smarter than people in Ohio” crowd is not that impressive. There is not a Norman Mailer or an Andy Warhol among the current band of coastal sophisticates. They have been encouraged by every movie and keynote graduation speaker since 1982 to embark upon a hero’s journey to make a difference, as measured by wealth or fame. Failing that—and most do because people are generally untalented—they settle upon politics, where they can achieve significance based merely on association. The most irredeemable of them go one step further and become FBI director. They control culture, academia and media and reward one another with jobs to perpetuate their reign.

But because America is a democracy, they do not control the government—except those members of the government who succumb to media flattery or criticism, however fake. They are capable of large-scale fabrication that preserves their self-regard. First it was Russia. Last week, they invented the rise of white supremacy just so they and theirs could pose on Facebook as Selma marchers.

Forgive the rest of America for considering the whole thing insipid and being offended that this self-absorbed mob would cast them as racist only to posture as heroic in contrast.

Trump—the man, the haircut, the reality show host—punctures these conceits. Steve Bannon may lead a notable conservative web site, but he is no McMurphy.

As all things in the Trump era have been and will be, what happens next will be newsworthy. Given the exit interview he provided to the The American Prospect, there is a chance Bannon thinks it was all about him, or at least the nationalist agenda he espouses.

People are not given to that level of abstraction, which is why it has always been impossible to go straight from polemic to policy. Not even Reagan, the triumphalist mythology of the never-Trumpers notwithstanding, presided over anything that pure.

It was the Reagan Justice Department’s advocacy in Chevron U.S.A., Inc. v. Natural Resources Defense Council, Inc., 467 U.S. 837 (1984), that created the Chevron Doctrine, and with it the modern Administrative State, from which Kathleen Sebelius drew her power to annoy everyone.

There will certainly be sniping from Breitbart toward Trump in the coming days. That is human nature. But the big guns will be trained on the real enemy: Congress and its 16 percent approval rating, for its failure to get on board.

If Breitbart succeeds in shaming scared-of-their-shadow Republicans in Congress into helping to enact Trump’s agenda, then Bannon just may become the conservative favorite the media thinks he is. He can’t do that without Trump, though. 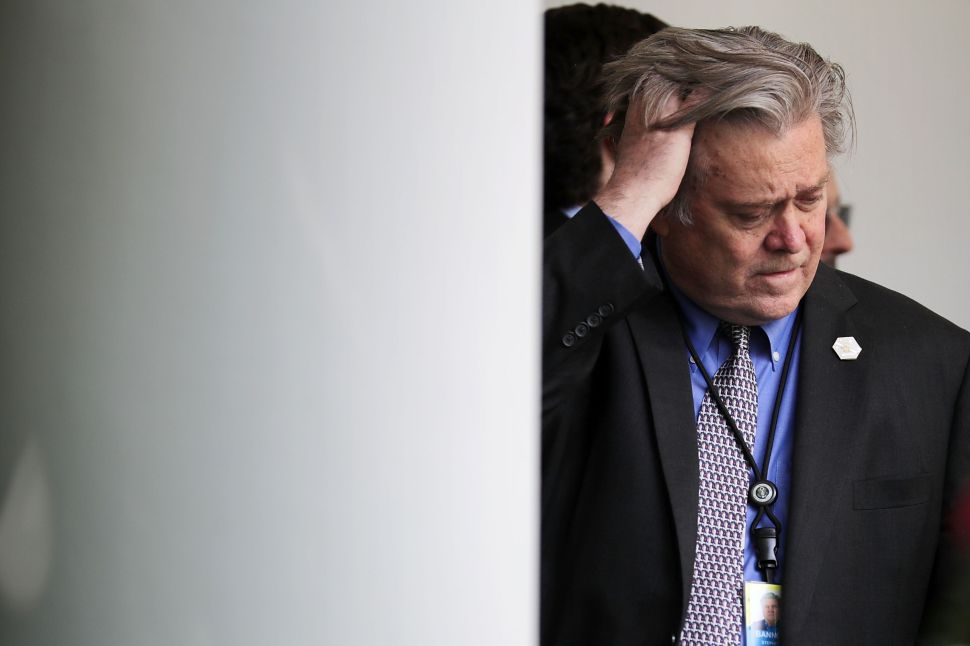