By the time he was 20 years old, colonial American Benjamin Franklin had already spent two years working as a printer in London. He returned to Philadelphia in 1726. During the sea voyage home, he kept a journal that included many of his observations of the natural world. Franklin was inquisitive, articulate and interested in mastering the universe.

During one afternoon calm on September 14, Franklin wrote,

“as we sat playing Draughts upon deck, we were surprised with a sudden and unusual darkness of the sun, which as we could perceive was only covered with a small thin cloud: when that was passed by, we discovered that that glorious luminary laboured under a very great eclipse. At least ten parts out of twelve of him were hid from our eyes, and we were apprehensive he would have been totally darkened.”

Total solar eclipses are not rare phenomena; every 18 months on average one occurs somewhere on Earth. Franklin and his shipmates likely had seen eclipses before. What was different for Franklin and his generation was a new understanding of the causes of eclipses and the possibility of accurately predicting them.

Earlier generations in Europe relied on magical thinking, interpreting such celestial events through the lens of the occult, as if the universe were sending a message from heaven. By contrast, Franklin came of age at a time when supernatural readings were held in suspicion. He would go on to spread modern scientific views of astronomical events through his popular almanac – and attempt to free people from the realm of the occult and astrological prophecy. 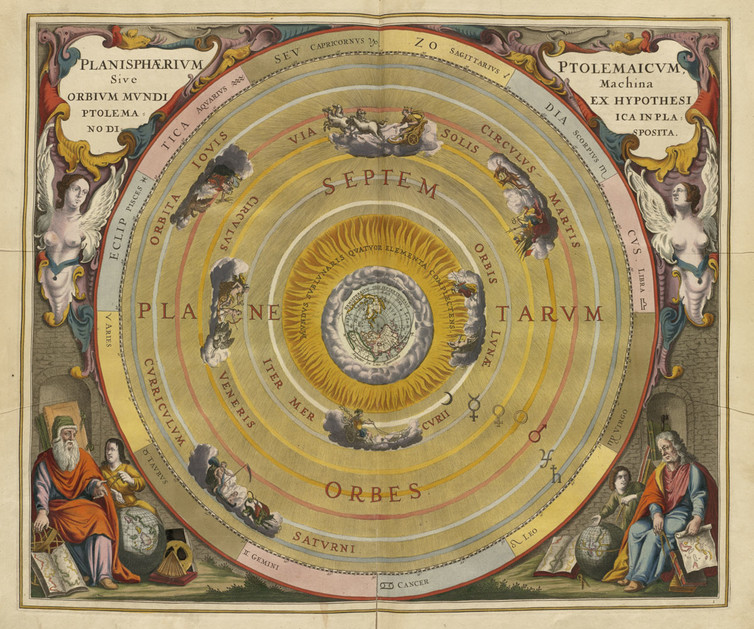 Beyond divine heavens with modern astronomy

Ancient people conceived of the heavens as built around human beings. For centuries, people subscribed to the Ptolemaic belief about the solar system: The planets and the sun revolved around the stationary Earth.

The idea that God drove the heavens is very old. Because people thought that their god (or gods) guided all heavenly occurrences, it’s not surprising that many people – ancient Chinese, for example, and Egyptians and Europeans – believed that what they witnessed in the skies above provided signs of future events.

For this reason, solar eclipses were for many centuries understood to be harbingers of good or evil for humankind. They were attributed magical or mysterious predictive qualities that could influence human lives. During the first century A.D., people – including astrologers, magicians, alchemists and mystics – who claimed to have mastery over supernatural phenomena held sway over kings, religious leaders and whole populations.

Nicholas Copernicus, whose life straddled the 15th and 16th centuries, used scientific methods to devise a more accurate understanding of the solar system. In his famous book, “On the Revolutions of the Celestial Spheres” (published in 1543), Copernicus showed that the planets revolved around the sun. He didn’t get it all right, though: He thought planetary bodies had circular orbits, because the Christian God would have designed perfect circles in the cosmos. That planetary motion is elliptical is a later discovery.

By the time Benjamin Franklin grew up in New England (about 150 years later), few people still believed in the Ptolemaic system. Most had learned from living in an increasingly enlightened culture that the Copernican system was more reliable. Franklin, like many in his generation, believed that knowledge about the scientific causes for changes in the environment could work to reduce human fears about what the skies might portend. 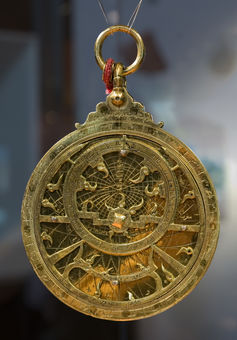 By measuring the height of celestial objects with an astrolabe, a user could predict the position of stars, planets and the sun. Pom²

It was an age of wonder, still, but wonder was harnessed to technological advances that could help people understand better the world they lived in. Accurate instruments, such as the astrolabe, allowed people to measure the motion of the planets and thus predict movements in the heavens, particularly phenomena like solar and lunar eclipses and the motions of planets like Venus.

In his earliest printed articles, Franklin criticized the idea that education belonged solely to the elite. He hoped to bring knowledge to common people, so they could rely on expertise outside of what they might hear in churches. Franklin opted to use his own almanacs – along with his satirical pen – to help readers distinguish between astronomical events and astrological predictions.

Printing was a major technological innovation during the 16th, 17th and 18th centuries that helped foster information-sharing, particularly via almanacs.

These amazing compilations included all kinds of useful information and were relied on by farmers, merchants, traders and general readers in much the same way we rely on smartphones today. Colonial American almanacs provided the estimated times of sunrises and sunsets, high and low tides, periods of the moon and sun, the rise and fall of constellations, solar and lunar eclipses, and the transit of planets in the night skies. More expensive almanacs included local information such as court dates, dates of markets and fairs, and roadway distances between places. Most almanacs also offered standard reference information, including lists of the reigns of monarchs of England and Europe, along with a chronology of important dates in the Christian Era.

Almanac culture dominated New England life when Franklin was a youth. They were the most purchased items American printers offered, with many a printer making his chief livelihood by printing almanacs.

Almanacs were money-makers, so Franklin developed his own version shortly after he opened his own shop in Philadelphia. The city already had almanac-makers – Titan Leeds and John Jerman, among others – but Franklin aimed to gain the major share of the almanac trade.

Franklin considered astrological prediction foolish, especially in light of new scientific discoveries being made about the universe. He thought almanacs should not prognosticate on future events, as if people were still living in the dark ages. So he found a way to make fun of his competitors who continued to pretend they could legitimately use eclipses, for instance, to predict future events. 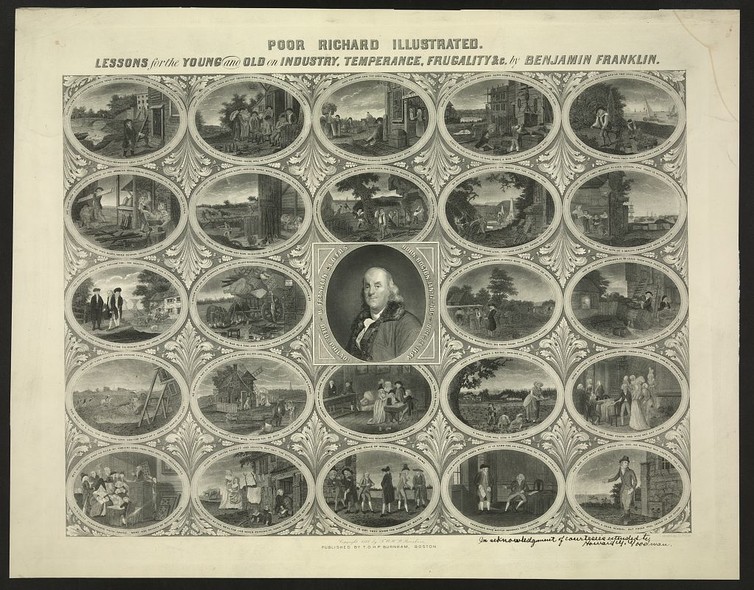 Franklin dispensed many aphorisms in the guise of ‘Poor Richard,’ such as ‘Love your Enemies, for they tell you your Faults.’ Oliver Pelton

In addition to the usual fare, Franklin’s almanac provided stories, aphorisms and poems, all ostensibly curated by a homespun character he created: Richard Saunders, the fictional “author” of Franklin’s “Poor Richard’s Almanac.”

The “Poor Richard” Saunders persona allowed Franklin to satirize almanac makers who still wrote about eclipses as occult phenomena. Satire works because it closely reproduces the object being made fun of, with a slight difference. We’re familiar with this method today from watching skits on “Saturday Night Live” and other parody programs.

Franklin’s voice was close enough to his satirical target that “Poor Richard” stole the market. For instance, Poor Richard began his career by predicting the death of Titan Leeds, his competitor. He later would do the same thing to John Jerman. Franklin was determined to mock almanac-makers who pretended to possess occult knowledge. Nobody knows when a person might die, and only astrologers would pretend to think a solar or lunar eclipse might mean something for humans.

Franklin included a wonderfully funny section in his almanac for 1735, making light of his competitors who did offer astrological prognostications. As “Poor Richard,” he wrote:

“I shall not say much of the Signification of the Eclipses this Year, for in truth they do not signifie much; only I may observe by the way, that the first Eclipse of the Moon being celebrated in Libra or the Ballance, foreshews a Failure of Justice, where People judge in their own Cases. But in the following Year 1736, there will be six Eclipses, four of the Sun, and two of the Moon, which two Eclipses of the Moon will be both total, and portend great Revolutions in Europe, particularly in Germany….”

Richard Saunders is clear in the opening remark that “Eclipses … do not signifie much.” He nonetheless goes on to base amazing predictions for 1736 on them, in effect lampooning anyone who would rely on the stars to foretell human events. Great revolutions were taking place in Europe, but no one needed to read eclipses in order to figure that out; they needed only to read the day’s newspapers.

The next year, Franklin decided go a step further than just satirizing these occult prognostications. He had Richard Saunders explain his understanding of some of the science behind eclipses. He characterized the “Difference between Eclipses of the Moon and of the Sun” by reporting that:

“All Lunar Eclipses are universal, i.e. visible in all Parts of the Globe which have the Moon above their Horizon, and are every where of the same Magnitude: But Eclipses of the Sun do not appear the same in all Parts of the Earth where they are seen; being when total in some Places, only partial in others; and in other Places not seen at all, tho’ neither Clouds nor Horizon prevent the Sight of the Sun it self.”

The goal of an explanation like this? To eclipse occult belief. He hoped people would become more confident about the universe and everything in it and would learn to rely on scientifically validated knowledge rather than an almanac-maker’s fictions.

Carla J. Mulford is a Professor of English at Pennsylvania State University. This article was originally published on The Conversation. Read the original article.