The Fox News Specialists just won’t seem the same now that manly man Eric Bolling has been suspended amid allegations that he emailed penis pictures to women he worked with at Fox News Channel and Fox Business Channel.

Bolling, the most special among them, burps up hairballs like “Fake News!” and charges like “The Washington Post and the New York Times, you should be ashamed of your reporting!”

Shame, indeed. Three years ago, discussing how a female pilot led an air strike against ISIS, Bolling quipped about “boobs on the ground,” which might have been clever in a sexist way except that she flew an airplane and was, therefore, not on the ground, not even her boots.

Until now, he’s been the hip dude on the Fox boob tube. A former commodities broker, Bolling likes to affect a hunky, rugged look on air, rarely wearing a necktie, his collar unbuttoned, his air dismissive, above it all, too cool for school.

His show got thrown together in a sudden schedule shift in April after Fox superstar Bill O’Reilly resigned due to sexual harassment allegations.

Bolling, it has been reported, was being considered for a post in the administration of amateur President Donald Trump. He has also threatened to run for U.S. Senate.

Bolling would be perfectly qualified for Trump because he talks rough and tough about liberals and Democrats, just the way Trump likes it on Fox, just like Sean Hannity, Fox’s leading Trump fluffer, who dines with Trump in the White House and whispers in his ear.

Remember way back when Anthony Scaramucci’s career as White House communications director ended after less than two weeks? That was because Scaramucci went crazy over a leak about a White House dinner involving Trump, Hannity, Scaramucci and Bill Shine, who used to help Ailes run Fox News.

Among other things, in his quest to discover the leaker, Scaramucci told The New Yorker that Trump senior advisor Steve Bannon fellates himself. (What other photographs might Bolling have for the gals at work?)

Anyway, Shine was the guy who resigned this spring because he was right in the middle of the hound-dog pack of Ailes, O’Reilly, Payne and Bolling and didn’t seem to see any problem. Perhaps Trump, who brags about grabbing women by the crotch, might find a place in his administration for Fox guys like O’Reilly, Shine, Bolling or Payne.

One of them could replace Scaramucci and Sean Spicer as White House director of communications. Or that job could go to 31-year-old adviser Stephen Miller, the brightest young fellow on Earth, who pleased Trump so much last week with his TV performance in the briefing room when he berated reporters from the New York Times and CNN. For good measure, Miller also trashed the Statue of Liberty.

Yes, days after Sports Illustrated quoted Trump as having called the White House a “dump,” Miller—in a figurative, verbal sense—urinated on the Statue of Liberty by dismissing its poetic message of immigration for the tired, the poor, the huddled masses, and the refuse of teeming shores.

Instead, Trump has announced—with Miller’s help—that legal immigration should be cut in half and reserved for more privileged people just like Miller! (Had Trump encountered Lady Liberty, who know where he might have grabbed her).

With his cobra eyes and his toxic tongue, Miller might be the perfect television image for Trump. Miller’s got a Roy Cohn mien that must stir Trump’s testosterone-charged blood. A sinister red-baiter from the blacklist era, Cohn was once Trump’s lawyer and mentor.

If still alive, the manipulative Cohn might be delighted by the lawsuit filed last week by a detective who accused Fox News of conspiring with the White House to concoct a fake news story about a Democratic National Committee employee being murdered for giving DNC emails to WikiLeaks.

After this vicious story slandered a dead man and horrified his grieving family, even the Fox website took it down because it was a lie. But Hannity, ever true to Trump, kept pushing it to deflect blame from the Trump ring and its dealings with Russian agents.

Especially in the case of Hannity, it is increasingly hard these days to tell where the Trump White House ends and Fox News begins. Perhaps when he returns vindicated from his suspension, Eric Bolling will explain it all to us on a special edition of The Specialists.

A Fox Voice Worth Heeding

Charles Krauthammer, a conservative commentator on Fox News Channel, is a psychiatrist and a first-rate political and cultural analyst who sometimes sees beyond the obvious. Such was the case with amateur President Donald Trump last week when Krauthammer diagnosed the social neurosis Trump stokes.

After Trump’s angry harangue to a loud mob in West Virginia on Thursday, Krauthammer visited Tucker Carlson Tonight to say, “This is a very important demonstration to the country, to the political elites, to the press, which he doesn’t particularly like, that he has his army… This appearance… is a way of saying ‘My numbers may be down, but I command a formidable army.’”

By “army,” Krauthammer didn’t mean the kind of armed forces once commanded by all those former generals who now work in Trump’s administration. He didn’t mean the people still in uniform (who Trump calls “my generals”) who lead American troops in the field.

This Trumpist clenched his fist and shook it and mouthed words as Trump spoke them, applauding exceedingly and grinning in a stagey way. It seemed almost as if somebody had placed this zealot near Trump to make a contrast that said “See, clearly, the president isn’t nearly as nuts as his supporters!”

Krauthammer predicted that if Trump is impeached and removed from office, it may cause a backlash from the kind of people roaring for him in West Virginia. Although they may be only 33 percent of the population, this many people can make a mighty fuss.

“That’s why I think we’re really headed into very choppy and dangerous constitutional ,” Krauthammer said. “It would be a catastrophic mistake. It would cause a rupture in the country where people would say ‘When we, the people, the ones who have been abandoned, elect somebody we like, our guy gets taken out.’”

Krauthammer put the circumstances of Trump’s speech in the context of the investigation of Trump’s circle and its possible involvement in the Russian espionage scandal in last year’s election. He did not use the word “demagogue.” He didn’t have to.

“This whole speech was ‘Russia closing in on me in Washington—versus you, the people,’” Krauthammer said. “That’s how he set it up. He’s very good at this.”

Bill Maher’s Real Time on HBO on Friday nights is a hit-and-miss hour. Its comic moments range from pretty witty down to what you might see scribbled on the wall of a men’s room stall. His show on Friday ended with a brilliant bit featuring comedian Reggie Brown.

And what if Obama had said of his military strategy, “I’m speaking with myself and, number one, because I have a very good brain and I’ve said a lot of things.”

Imagine Obama saying something like, “Sorry, losers and haters, but my IQ is one of the highest and you all know it.”

And perhaps Obama might have been criticized if he had said, “I could stand in the middle of Fifth Avenue and shoot somebody and I wouldn’t lose voters.”

Criticized by right-wingers for not being a convincing Christian, Obama might have said, as Trump did, “Why do I have to repent and ask for forgiveness if I’m not making mistakes?”

Of Holy Communion, Obama might have added, as Trump did, “When I drink my little wine and have my little cracker, I guess that’s a form of asking for forgiveness.”

At this point, Maher showed a gag image of Sean Hannity’s head exploding. The next few lines were about Trump not knowing health care was “so complicated” and Trump bragging about inventing the expression “prime the pump” and Trump thinking Frederick Douglass was still alive.

It ended, of course, with the Obama character speaking the words of Trump regarding Trump’s serial sexual predation…

“I moved on her like a bitch. I just start kissing them. I don’t even wait. And, when you’re a star, they let you do it. You can do anything. Grab ‘em by the pussy.”

…And, of course, the size of his penis.

The effect is best with Brown heard and seen on the screen. It’s all over the internet, Brown, as Obama, reciting Trump’s words on Maher’s show on HBO. And if Trump boycotts the White House Correspondents dinner again next year, they should book Brown as Obama and Alec Baldwin as Trump and put on a show for the ages.

The commentators on the pundit panel were harsh about the Trump administration. One warned that if Trump fires special counsel Robert Mueller, “Mueller will be the lead witness in his (Trump’s) impeachment hearing.”

The second opinion addressed Trump’s feud with the intelligence agencies.

“He has a very dicey relationship with people who weaponize information for a living,” he said. “It’s still haunting him… He has to change his tone.”

And the third commentator reflected on how John Kelly is trying to organize the White House as the new chief of staff.

“That White House is a snake pit,” the man said.

What made the opinions so startling is that they were heard on Fox News Sunday, representing Trump’s sanctuary network. The speakers were Rich Lowry of National Review, Jason Riley of the Wall Street Journal and Charles Lane of the Washington Post.

Among the other shows, not much stood out on what seemed almost like a normal, relaxed, August Sunday morning.

On ABC’s This Week, host George Stephanopoulos tried to get Trump mouthpiece Kellyanne Conway to reveal which generals Trump spoke with before he impulsively tweeted out a surprise purge of transgender people in the military. She talked for 20 minutes but never answered the question.

On Media Buzz on Fox, host Howard Kurtz gave less than a minute to the Eric Bolling suspension but he had plenty of time for Trump advocate Katrina Pierson, who said, “Most Americans got out there and actually voted for President Trump.” Kurtz didn’t correct her, so here goes: No. Actually, more Americans really voted for Hillary Clinton.

And on Meet the Press on NBC, Chuck Todd welcomed Arizona Republican Sen. Jeff Flake, who is trying to distance himself from Trump with public interviews and a new book called Conscience of a Conservative.

“Populism is a sugar high,” Flake told Todd, referring to the Trump buzz. “And, once you come off it, it’s particularly troublesome for the party. I wish we had been more truthful with the electorate.”

Flake said Republicans “should have stood up to birtherism” when Trump insisted, in 2011, that Obama was born in Africa and, therefore, not a legitimate president.

As for the “Lock Her Up!” chants that Trump’s worshippers still use for Clinton, Flake said, “We shouldn’t be the party for jailing your political opponents.”

He also said it might be good if Trump stops referring to top Democrats as “clowns and losers.” 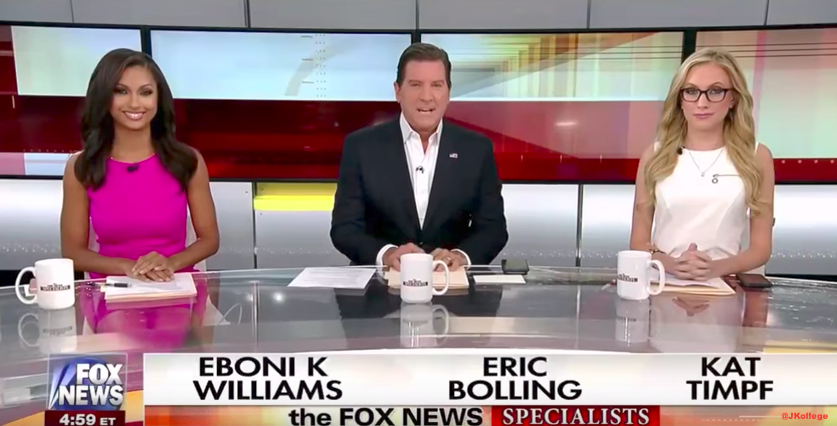