Loeb — a major financial backer of Gov. Andrew Cuomo and Republicans — is chairman of Success Academy’s board and has faced calls for his resignation after his racially charged comments about Stewart-Cousins, who is mounting a campaign to wrest the Senate majority leader position from Republicans in Albany.

During a strategy session last month with Democratic state senators, Cuomo told the elected officials that Bronx Senator Jeffrey Klein, the IDC leader — understood the suburbs better than they did, the Times reported.

Stewart-Cousins reportedly said Cuomo saw her “black skin” and that she is a woman “but you don’t realize I am a suburban legislator.” Both Cuomo and Stewart-Cousins denied that there were any tensions, and said it was a good meeting.

In response to the article, Loeb took to Facebook to argue that Klein has supported “economic mobility and opportunity for poor knack kids” — apparently misspelling the word “black” — and charged that Stewart-Cousins pays “fealty to powerful union thugs and bosses” and has done “more damage to people of color than anyone who has ever donned a hood.” He later apologized and deleted the comment.

Elected officials and community leaders gathered at the Success Academy Harlem 1 charter school to call on Loeb to resign.

State Sen. Brian Benjamin, who hosted a rally in support of Stewart-Cousins on Monday that attracted the top Democrats in New York City and other parts of New York State, said that he did not accept Loeb’s apology.

“What kind of disrespectful stuff is that?” Benjamin said. “That’s worse than the comment. The fact that you believe you can just have some little statement and just go on with your life and everything and everyone just kind of moves on and then Eva Moskowitz writes a letter and everyone moves on — we are not moving on.”

And he said that he is “prepared” to use whatever tools “are in our disposal.”

“I will be prepared to sue them if Success Academy does not do the right thing,” Benjamin continued. “We don’t need to have a three-hour rally and talk all damn day. The bottom line is the response has been inadequate. It has been grossly inadequate and it is disrespectful to our community and as long as I’m the state senator … I will not allow this community to be disrespected.”

A spokeswoman for Success Academy did not immediately respond to a request for comment.

Cuomo and Klein have condemned the comments and distanced themselves from them. Moskowitz, a Democrat and former city councilwoman who was once floated as a candidate to serve as President Trump’s education secretary but announced she would not take the job, defended Loeb’s pro-charter school stance but criticized his word choice.

Success Academy announced that Loeb would remain as chairman of its board.

District Leader Cordell Cleare, who ran for the City Council District 9 seat formerly held by now-Assemblywoman Inez Dickens, said that Success Academy students “are being educated by a spirit that feels this way about black women” and that children are also “watching this.”

The leaders also called on members of the Senate Independent Democratic Conference, a group of Democrats who have a power-sharing agreement with Senate Republicans, to return to the Democratic fold. They also urged Klein, the IDC leader, and other elected officials to return money they received from Loeb.

Jonathan Westin, executive director of New York Communities for Change, reminded the crowd that Moskowitz gave Trump’s daughter, Ivanka, a tour of Success Academy Harlem 1 charter school in November 2016 and also hosted House Speaker Paul Ryan, a Republican, in May. Both visits were met with protests.

He said that the institution “has a problem with being on the wrong side of the political spectrum in this country.”

“This is just the latest example where Dan Loeb, their board chair, their biggest donor, their fundraiser, their political ally, decided that he would expose himself and his beliefs,” Westin said. “And as far as I’m concerned, until they disassociate themselves, the beliefs of this institution to be based on a racist mentality in the center of black culture — Harlem — it is unacceptable.” 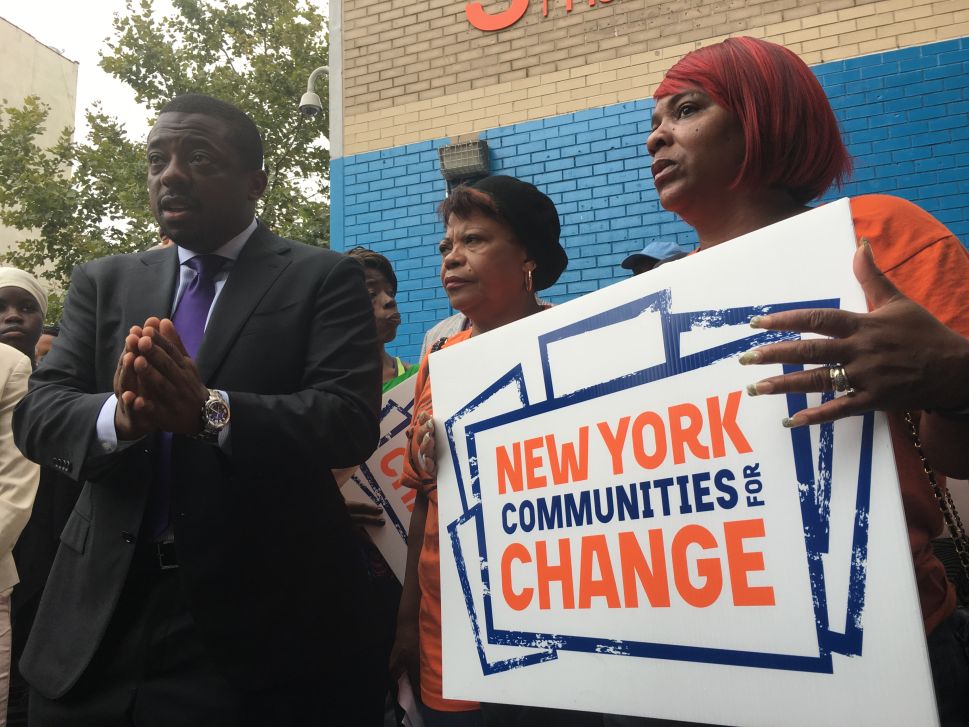